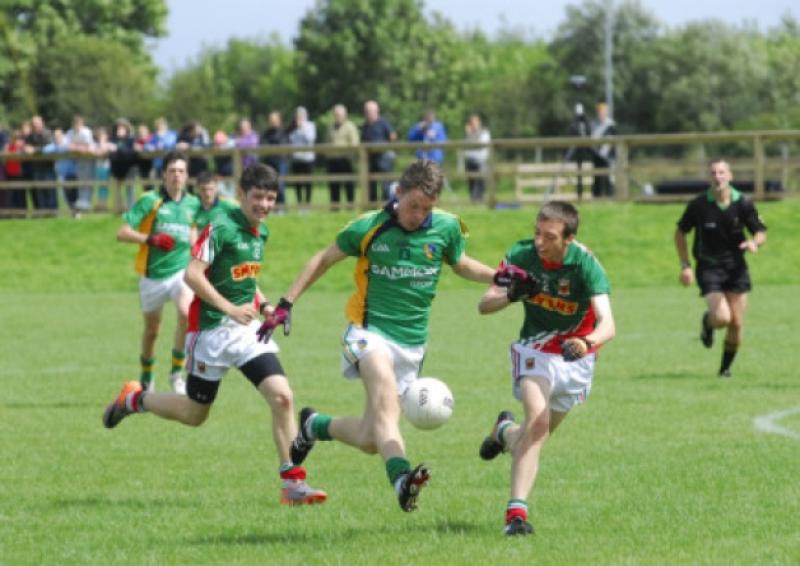 The pace and power of a driven Mayo East West proved the difference as a battling Leitrim struggled to match their power in vital areas.

The pace and power of a driven Mayo East West proved the difference as a battling Leitrim struggled to match their power in vital areas.

Leitrim travelled to the excellent Connacht GAA Centre of Excellence with quite a deal of confidence, confidence very much justified thanks to previous results and some superb performances in this competition and the Fr Manning Cup.

But their confidence slowly disolved as Mayo, wasteful as ever, dominated the general play and should have been well out of sight by the time the second half started.

It was only thanks to some awful finishing from the Mayo forwards and two wonderful saves/blocks from keeper John Sheridan that Leitrim were not facing a serious halftime deficit as Mayo created a host of genuine goal chances.

Leitrim probably felt at halftime that they had got out of jail to a large degree as they were only trailing by two points, a feeling intensified as two early points pulled the Green & Gold level but Mayo showed a lot of fortitude to ride the storm and claim a deserved win.

The loss of Peter Reynolds was felt severely in this encounter - when the two sides met in the Group stages, Mayo missed a lot of chances but the Ballinamore man punished them far more effectively.

Without Reynolds as their focal point in attack, Leitrim lacked the cutting edge they so desperately craved and the fact that the Leitrim goal came after a free was hit long across the goal, met by a flying Conor Cullen, only served to emphasise the amount of clear cut goal chances Mayo EW created over the hour.

Perhaps expectation and a burden of favouritism got to the Leitrim lads as they played without the same vigour they displayed against Kildare the previous Monday but you have to say that Mayo had done their homework and done it well, attacking Leitrim’s strong points all over the field.

To their credit, Leitrim never lay down and fought all the way to the final whistle, displaying plenty of fire.

The Leitrim defence found it difficult to cope with Mayo’s fast moving attack while Alan McTigue, Conor Cullen and Niall McGovern, who moved out to midfield in the second half, had their moments in the middle of the park.

Upfront, Leitrim found it difficult to gain any real momentum without Reynolds spearheading their attack as Mayo defended solidly and in good numbers.

Mayo started well but only had a Jonathan Burke point to show for their early dominance as full-forward Patrick Leneghan was twice de nied certain goals, the first from a save from keeper John Sheridan on seven minutes and again two minutes later.

Mayo, however, did find the net on 13 minbutes when Burke somehow got first to a deflected shot to set up James Lyons for a well taken close range goal.

Leneghan added a point as the Mayo EW team looked as if they were running away with it but Leitirm got a life-line against the run of play when Robbie Cunningham’s free from the corner seemed to be heading wide when Conor Cullen flew in to fist the ball to the Mayo net.

Mayo continued to dominate and miss chances, Leneghan ppointing when he should have goaled but drove over the bar.

Niall McGovern, operating at full-forward, pointed after being set up by a Daniel Hackett tackle and pass but there was still time before the break for Mahyo to miss two great goal chances, the impressive Sheroze Akram hitting the post with Sheridan beaten while Barry Duffy shot into the side netting.

Leitrim started the second half brighlty with a Cunningham free and a lovely curling effort from Daniel Hackett tying the scores after less than two minutes of the second half.

If Mayo were rattled by dominating for so long and now being level, they didn’t show it - Liam Byrne and Burke both added points to wipe out the Leitrim gains within two minutes.

Burke added another point to stretch the lead to three but Leitrim continued to fight - sub Ronan Gordon dropped a free short but the Mayo defence made two vital blocks before Ryan O’Rourke tapped oover.

Gordon and Byrne swapped points at either end before another Gordon free left just a point in it with 12 minutes left to play.

Unfortunately, Mayo hit back immediately with James Devaney pointing and as Mayo flooded men back to stop any goals, they hit effecitvely on the break with Akram scoring an increidble point from the right corner to seal a deserved win.