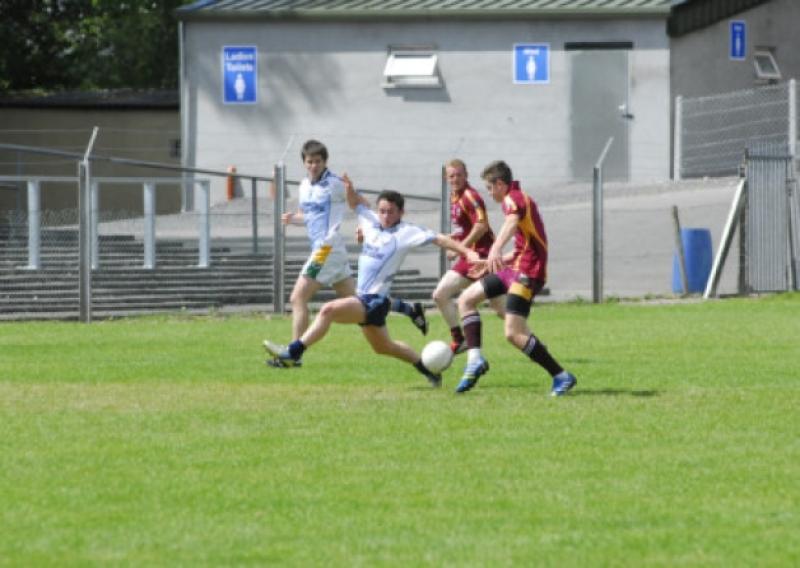 Annaduff dramatically kept their championship hopes alive when shocking Allen Gaels to set up a playoff meeting with Bornacoola.

Annaduff dramatically kept their championship hopes alive when shocking Allen Gaels to set up a playoff meeting with Bornacoola.

Coming off the back of two losses in the campaign, Annaduff looked as if they were headed for the relegation playoff and the early exchanges would seem to back them up as a vibrant and confident Allen Gaels surged into a 1-4 to 0-1 lead after just 16 minutes.

But a lifeline of a fantastic individual goal from County Minor Kenny Cox seemed to inspire Annaduff to greater heights and after halftime, a flurry of scores, four fantastic points, put them two in front and a stunned Allen Gaels simply had no answer.

The transformation was quite remarkable as suddenly, Annaduff were winning every ball, charging forward and playing with a confidence not seen in the opening quarter.

The result, while incredibly disappointing for the Gaels, hurt Drumreilly far more as they lost out thanks to scoring difference after they, Allen Gaels and Annaduff were all tied together on two points.

Drumreilly attempted to get their game played at the same time as the Annaduff v Allen Gaels clash but early on in this game, it didn’t look as if it would be a worry for Drumreilly.

Annaduff’s victory sees them into a eighth place/relegation playoff against their neighbours and great rivals Bornacoola, a mouth watering clash for the supporters next weekend.

Allen Gaels got off to a bright start with a point apiece from James Flynn and Brian Mulvey, with Ray Cox replying on four minutes. But Allen Gaels looked like a team full of intent as Emmet Burke fired over a lovely point.

Martin Raftery weighed in with a huge point on 11 minutes and it looked as if it would be a cake-walk for the Drumshanbo men when Alan Wynne rounded his man with ease and his pass across the goal was met by a flying James Flynn who punched the ball to the net on 16 minutes.

However, Annaduff’s campaign changed in an instant as Allen Gaels were unable to score for the next 25 minutes. There didn’t seem to be anything on when Kenny Cox gained possession out the field but his run took his past the defence and his blistering short found the back of the net despite Kevin Nolan’s despairing dive.

Alan Rowley pointed six minutes later but Annaduff almost got a second goal when Ray Cox got his hand to a long ball but diverted it the wrong way with just the keeper behind him as the halftime score stood at 1-4 to 1-2.

The first ten minutes of the second half belonged to Annaduff - Ray Cox put over a lovely high point while Kenny Cox converted a free that was moved in for dissent, Ryan Higgins being yellow carded.

Brendan Guckian chipped over nicely for a point and Ray Cox finished off a great team move with a ninth minute point. Allen Gaels stopped the rot with an Emmet Burke free on 11 minutes but two more Cox frees extended the Annaduff lead to four points.

Burke hit back with a free with Ray Cox getting a yellow card for dissent but the next yellow card summed up Allen Gaels day as Ryan Higgins received a second booking and got his marching orders.

Sub Sean McNabola curled over a wonderful point for Annaduff and Ray Cox stretched the lead to four with less than two minutes to go. Allen Gaels did try to rally with two Emmet Burke frees going over while Martin Beirne tried to get a touch on a long ball but to no avail.