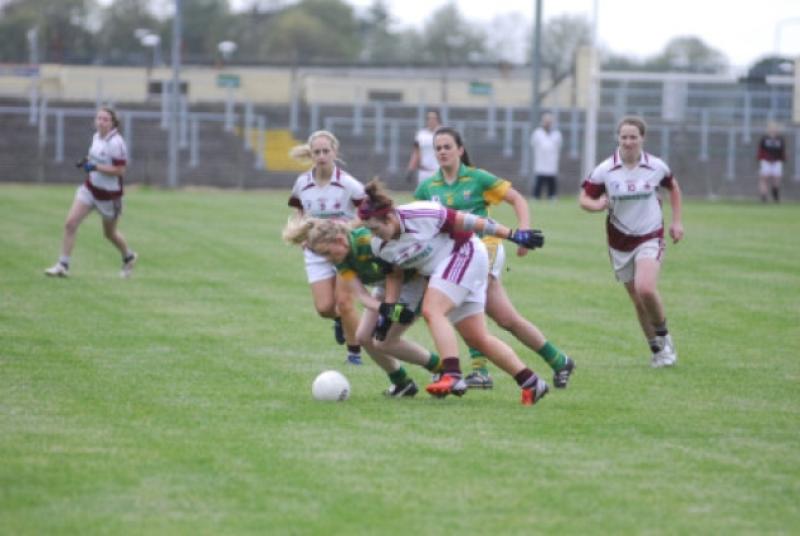 After the high of claiming the Leitrim Junior Championship a week earlier, Drumkeerin suffered defeat in the Connacht championship last Sunday.

After the high of claiming the Leitrim Junior Championship a week earlier, Drumkeerin suffered defeat in the Connacht championship last Sunday.

Drumkeerin got off to the best possible start when they found the back of the Shannon Gaels net but that was to be as good as it would get as the Roscommon champions took over and deservedly claimed their spot in the final.

The absence of Deirdre Devitt, Shannon O’Grady and Aimee O’Grady was a real blow to Drumkeerin as all three had been instrumental a week earlier when Drumkeerin won the county final.

In their absence the onus was on the likes of Michelle McNama, Michaelaigh Nolan, Ann Marie Gallagher and Shauna Clancy to bring the fight to Shannon Gaels.

While the Drumkeerin players gave their all they were overrun for large stretches of the game with Shannon Gaels particularly strong down the middle of the pitch.

While the scoreline doesn’t hide the fact that Shannon Gaels were undoubtedly the stronger team, the Leitrim representatives did start brightly.

However, Drumkeerin managed only an additional point during the opening half as Shannon Gaels took control and goals from team captain Ruth O’Hart and Sile O’Dowd meant they led 1-1 to 2-6 at the break.

Deirdre Devitt who was forced out of the county final was introduced three minutes after the restart and while she did help to shore up the defence it was evident she wasn’t fully fit and Shannon Gaels continued to dominate.

With the result beyond doubt both sides made a number of changes but the Drumkeerin supporters did have one further chance to find their voice when Ann Marie Gallagher scored a fine goal but ultimately this had no bearing on the final outcome.