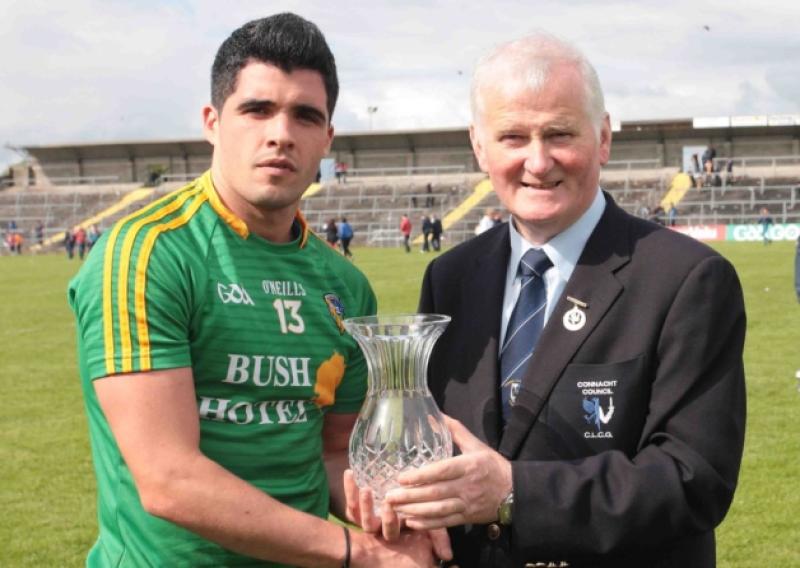 Leitrim fans may have travelled more in hope than expectation but whatever expectations there were, they were washed away in a deluge of first half Roscommon scores in the Connacht Senior Championship First Round in Hyde Park.

Leitrim fans may have travelled more in hope than expectation but whatever expectations there were, they were washed away in a deluge of first half Roscommon scores in the Connacht Senior Championship First Round in Hyde Park.

It was not a classic Leitrim case of what if, what if Leitrim had performed in the first half as a dominant Roscommon did exactly what they had to do, never giving Leitrim an ounce of hope during a dominant first half.

The home side scored 1-11 out of their 1-12 first half tally from play and had nine different scorers from all areas of the field as Roscommon went about ensuring that Leitrim’s anticipated defensive plan would never had a chance of working.

A heart-warming second half when Leitrim’s players seemed to throw caution to the wind prevented a white-wash in the Hyde but the eight point margin of victory accurately reflected the difference between the sides.

It would be easy to cling to straws after the game, wondering what might have happened had Leitrim not conceded 1-2 in the five minutes before the halftime break but you’d have to say that Roscommon were definitely the superior team.

Knowing these players, hard luck stories and gallant losers tag will not mollify them as you have to say that Roscommon lessened their intensity during the second half, content to concede ground to a Leitrim side throwing caution to the wind.

And any time Leitrim did manage a run of scores, Roscommon replied with their own flurry during the second half, just enough to keep them comfortable.

Two pre-match changes and a host of positional switches didn’t seem to do much for the Green & Gold as Sean Hagan’s team looked disjointed and out of sorts as Leitrim relied solely on frees for their five first half scores.

The gamble on Conor Beirne and a young Micheal McWeeney backfired as, despite a lot of effort from both players, neither was able to impose themselves on the game and Roscommon always had an extra man back to defend against the long ball to the Eslin man.

Leitrim needed goals to win this game but never got a sniff of an opportunity to find the net apart from one mis-struck Darren Sweeney effort as Roscommon’s defence held firm against anything Leitrim might throw at them.

In defence, Leitrim struggled under a composed and deliberate Roscommon game-plan - quick and accurate deliveries, often under no pressure, negated the attempts to impose a blanket defence and any time Leitrim managed to get bodies back flooding the attacking lanes, Roscommon simply kicked some wonderful points from play.

The loss of Darren Sweeney to a black card, the right decision it must be said, also hit Leitrim hard but the damage was already done by then as too many players seemed out of sorts, a few struggling in new positions.

On paper, there was good reason to believe that Paul Brennan could do an effective job at corner-back against Senan Kilbride but it is a specialised position that didn’t make the most of Brennan’s energy and fire and the Roscommon man feasted on Brennan’s discomfort.

When moved out the field to his more natural environment, Brennan was instrumental in Leitrim’s improved second half display and was, along with Kevin Conlan, Paddy Maguire, Barry McWeeney & Robbie Lowe, one of Leitrim’s stand out players.

However, none stood out more than captain Emlyn Mulligan - eight points, two from play, were the exclamation points on a display full of leading by example, work-rate and heart and his man of the match award was a fitting recognition of an immense display.

The difference between the sides were illustrated as early as the first three minutes - Conor Beirne had a bad wide after 50 seconds but Roscommon hit back with a free Senan Kilbride pointing at ease before Cathal Cregg scored after a low ball found him with ease.

Leitrim opened their account with an Emlyn Mulligan free but Roscommon seemed to be scoring two points for every one of Leitrim’s as they maintained this with Ciaran Cafferkey floating the ball over the bar from distance as the entire Leitrim team tried to drop back to close down space.

Keith Higgins fisted the ball over the bar after a Kilbride pass as Mulligan saw his attempt blocked at the other end. Donal Shine put a free wide before Conor Beirne punished a foul on Damien Moran after a surging run with an eighth minute free.

Niall Daly popped in attack to supply the pass for Ciaran Murtagh’s point with Shine pointing a free after Cathal Cregg had robbed Paddy Maguire and the full-back fouled on 12 minutes.

Leitrim got a bonus when an off-the-ball foul was spotted with the ball being moved forward by some fifty yards, Mulligan again converting although the Leitrim captain was desperately unlucky when his sideline effort, inside the 21 yard line, just drifted wide of the far post at the town end.

Ciaran Murtagh turned provider for Kilbride for a fine point with Kilbride then landing a huge second from the left hand corner to stretch the Roscommon lead to five points.

Ciaran Murtagh’s score on 20 minutes illustrated the gulf between the teams as the corner-forward gathered the ball on his knees with a man in town, managed to hold off the defender and still get up off the ground to swing the ball over the bar.

Darren Sweeney almost gave the Roscommon keeper a nightmare when his poor shot almost found the bottom corner as Conor Beirne fired over a free on 23 minutes.

Remedial action was needed as Micheal McWeeney’s championship debut was brought to an abrupt end after 24 minutes as Robbie Lowe, a surprise omission, came on, coinciding with Emlyn Mulligan sweeping a brilliant free from the right wing over the bar.

That left the gap at four points with 11 minutes left in the half but by the time the whistle sounded for the break, Roscommon killed off the game with an unanswered 1-3. Robbie Lowe had a bad wide and Leitrim’s day got far worse when Darren Sweeney received a black card for pulling down a player.

From the free, a completely isolated Niall Daly scored a huge point from the right wing and Keith Higgins added a second on 30 minutes.

Kevin Conlan’s saw a shot easily blocked after a high Mulligan free broke to the Dromahair man while Conor Beirne saw a free go badly off target, following up shortly after with a free that fell short.

Cathal Shine added a point for Roscommon after immense Leitrim pressure but from the kickout, Roscommon worked the ball through Ciaran Cafferkey and Ciaran Murtagh before Ronan Stack was left with the easy task of palming the ball past a helpless Cathal McCrann.

That left the halftime score at 1-12 to 0-5 and no matter what could be said at halftime, the game was as good as over and the atmosphere in the stands reflected that, a sense of the inevitable about the second half.

Conor Beirne was unlucky to see a good effort go wide but Gary Reynolds got Leitrim’s first score from play in the second minute, finishing off a good move with a fine point but Keith Higgins scored a lovely point from the corner in response.

Roscommon lost Cathal Shine to injury with Leitrim starting to stir as Mulligan and Kevin Conlan both put over frees in the space of a minute. Leitrim were enjoying their best spell and despite a wild Mulligan effort and a Conlan fifty coming off the post, Wayne McKeon scored a huge point on 11 minutes.

Sean McWeeney, named in the starting line-up but replaced by Conor Beirne, arrived on in place of James Glancy but it was Roscommon who got the next two scores to take the wind out of the Leitrim sails, Niall Daly and Donie Shine both on target.

Time was not Leitrim’s friend but they kept plugging away with Mulligan scoring a brilliant point after good work from Conlan and sub Alan McLoughlin, who replaced an ineffective Conor Beirne.

Leitrim were on a roll and three Mulligan points, one from play, suddenly had the large Roscommon crowd growing a little worried as the game came down to five points. The Leitrim captain had a chance to narrow the gap to four but his effort was well off target.

Roscommon took note of the scoreline and two points from U21 star Diarmuid Murtagh and one from sub Craig Burns gave them an eight point winning margin at the final whistle.