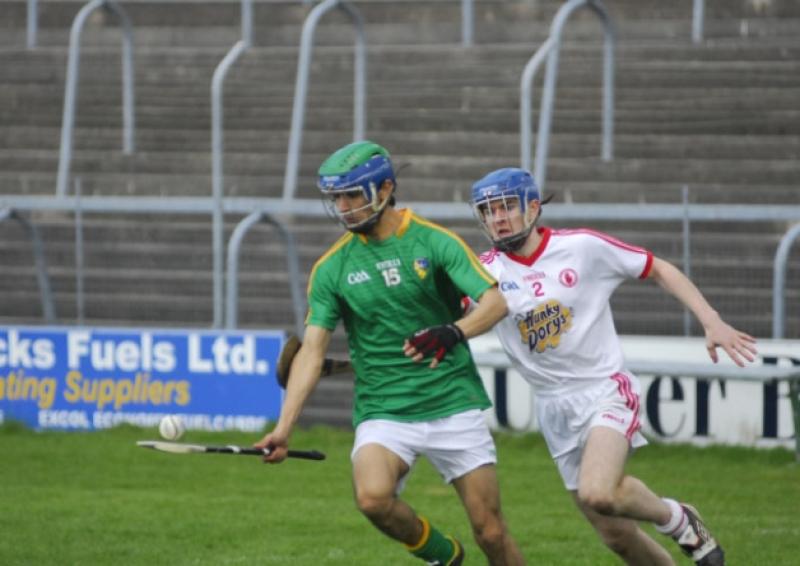 A disappointing Leitrim side proved to be no match for a highly committed Fermanagh outfit in Saturday’s Lory Meagher Cup game in Enniskillen’s Brewster Park where damp conditions prevailed.

A disappointing Leitrim side proved to be no match for a highly committed Fermanagh outfit in Saturday’s Lory Meagher Cup game in Enniskillen’s Brewster Park where damp conditions prevailed.

Adding to the visitor’s woes on the day Leitrim was forced play the game with fourteen men for the last 15 minutes after James Glancy was issued with a second yellow card.

After losing to Longford a week previously Saturday’s defeat puts Leitrim out of contention in the Lory Meagher hurling championship. Both Warwickshire and Leitrim and will be fighting it out on this Saturday in Páirc Seán MacDiarmada to avoid the wooden spoon.

When Fermanagh and Leitrim took the field, both teams were wearing different shades of predominantly green jerseys. Just before the throw-in Fermanagh turned their jerseys inside out with the apparent approval of match referee Brendan Sweeney. As a result the Erne side’s jersey numbers were almost invisible.

The sides were on level terms after four minutes of the action with Sean Corrigan putting over a Fermanagh ‘65’ and Leitrim’s James Glancy replying with a point from play.

Fermanagh edged into a five point lead by the 13th minute with Corrigan (free) and Francie McBrien pointing while Kieran Corrigan also fired to the net. Despite playing second fiddle so far Leitrim got right in contention almost immediately when Fergal Early shot a goal.

Leitrim was denied a second goal from James Glancy when Fermanagh keeper Mark Curry deflected Glancy’s shot out for a ‘65’ while Leitrim net minder Morgan Quinn also prevented a Fermanagh goal at the expense of a ‘65’ shortly afterwards.

The home side completely dominated the last quarter of the second half adding five points while Leitrim could only hit back with a single point from a Padraig O’Donnell free.

After Sean Corrigan hit two with Brendan McGarry and Francie McBrien adding a point apiece Fermanagh led by 1-7 to 1-2 at the break.

Shortly after the restart Padraig O’Donnell slightly reduced the Fermanagh lead with a Leitrim free. Within two minutes further points for the home side by Corrigan and McBrien stretched Fermanagh’s lead to six as O’Donnell kept Leitrim in touch by the 40th minute with a point from play and a free.

A Fermanagh surge over the next 14 minutes completely blew Leitrim’s challenge out of the water. In this spell Declan McGarry and Ciaran Corrigan shot goals for Fermanagh while Sean Corrigan whipped over three points.

The reduction of the visitors to fourteen players in the 55th minute when James Glancy saw yellow for a second time was a further blow for Leitrim. Over the next five minutes Padraig O’Donnell and Clement Cunniffe pointed Leitrim frees.

Fermanagh increased their advantage to thirteen points in the final ten minutes with sub John Duffy shooting over twice while Sean Corrigan and Francie McBrien added a point each. In this period Leitrim’s Padraig O’Donnell hit back with points from play and a free.