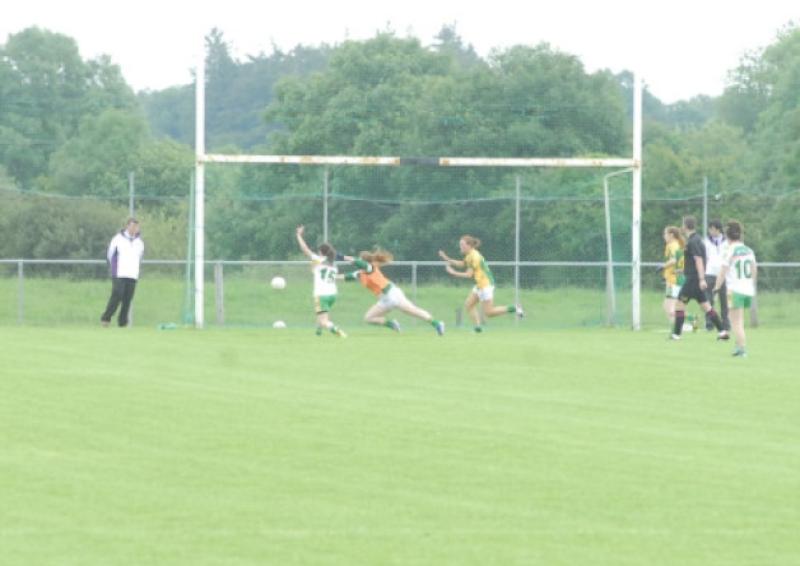 An impressive Offaly ended Leitrim’s hopes of All-Ireland Minor B Championship glory with a comprehensive and convincing win in Ardagh, Longford last Saturday.

An impressive Offaly ended Leitrim’s hopes of All-Ireland Minor B Championship glory with a comprehensive and convincing win in Ardagh, Longford last Saturday.

Leitrim had gone into the game full of confidence after their May Bank Holiday Monday victory over Roscommon but after a rocky start, Offaly took over and left Leitrim reeling in the splendid St. Patrick’s Ardagh clubgrounds.

With the Ladies football scene flying high, Leitrim were hopeful of progressing to another All-Ireland Final but they found a well drilled and impressive Offaly too hot to handle on the day.

Three goals in eight first half minutes look the obvious difference on the scoreboard but the Leinster side had already started to worry the small travelling Leitrim support with a string of support that had Martin Dolan’s side at sixes and sevens.

Leitrim had started brightly, their energetic movement, close-in passing and hard running off the shoulder seemingly causing a lot of problems for Offaly, particularly when Carmel McGovern scored a great goal after just four minutes.

And when Offaly lost their full-back to injury ten minutes later, you got the feeling that a far more mobile and pacy Leitrim were well on their way to victory.

But Offaly slowly but surely turned the game on it’s head. They dropped their full-forward back as an extra defender and were obviously well warned about the danger posed by Dearbhaile Beirne as, despite four points, the Mohill player didn’t have the desired impact.

Offaly had done their home-work and done it well. One player was tasked to mark Beirne but the minute the Mohill player got the ball, support came flooding in and the Leitrim forward often left herself isolated as she tried to beat the defence time and time again with her pace.

With her colleagues looking, it seemed, first and every time for Beirne, it simplified the task for the Offaly defence as they could crowd out the Leitrim attack.

And with Offaly getting goals, you could see the confidence drain from the Leitrim girls as the midlanders did a superb job in restricting the Leitrim attack.

Time and time again, Leitrim persisted in playing intricate passes in tight spaces and it meant that, with an extra defender adding to their solidity, Offaly were able to get a hand in or a block to disrupt Leitrim’s rhythm.

In truth, Leitrim never created the goal chance they so desperately needed in the second half despite an almightly effort and trojan work all around the field from this Leitrim team.

With a powerful midfield pairing that kept the dangerous Carla Le Guen and Eilish O’Dowd on the back-foot, Offaly gradually started to get the better of the Leitrim backs and when they cleverly isolated the full-back lines, goals were the result.

Three times, Offaly patiently worked the ball in until they were left with an attacker streaking clear of a defender or an over-lap that left Leitrim keeper Mary Glancy with no real hope of survival.

As crucial as the three goals in eight minutes were, the concession of a fourth goal just 15 seconds into the second half killed off any hope Leitrim had and despite a brave effort that cut an imposing 13 point gap back to just eight points with less than ten minutes to go, Offaly were able to hold out and hold out fairly comfortably.

Leitrim’s team featured a couple of U16s who will be in action in next Sunday’s Connacht B Final but it was Offaly’s persistance and strength that eventually proved key.

The Green & Gold definitely appeared to have an advantage in pace and stamina but they were unable to counter the strength of Hannah McMahon, Grainne Dolan, Roisin Egan and Shauna Farrelly who did a great job up the centre while forwards Ellie McEvoy, Emma Kirwin and Aoife Corbett displayed the killer instinct that won the day.

Keeper Mary Glancy can’t really be faulted for the goals that went past her and the Dromahair woman did make a magnificent save in the second half while the defence worked their socks off but found Offaly’s movement and passing just too much to counter.

Eilish O’Dowd and Carla Le Guen were probably Leitrim’s best performers on the day, they never stopped battling and fighting but found themselves up against an impressive Offaly duo.

Upfront, and despite scoring 1-12, Leitrim must feel that they were capable of so much more as any forward line with Dearbhaile Bierne, Ailbhe Clancy, Aileen Maguire and Carmel McCartin look capable of getting scores.

A lack of confidence in their own ability and an over-reliance on Beirne meant that Leitrim were just that bit too predictible and an isolated Beirne was kept well in check by a hard work Offaly defence.

You certainly couldn’t fault the work-rate, the effort and commitment of the Leitrim team, they ran themselves into the ground and hassled and harried all the way to the final whistle but when it counted most, Offaly just had that little bit extra.