Leitrim football is as strong as any county 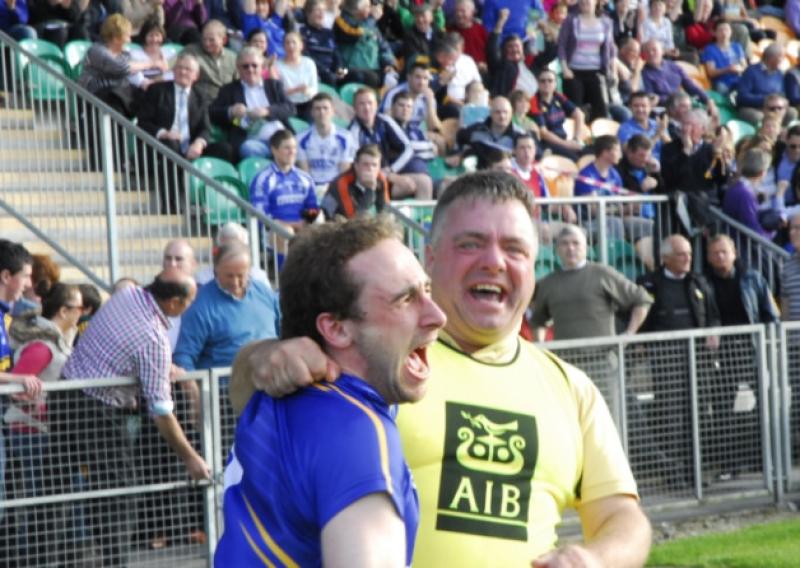 He may be the first non-Aughawillan native to lead the Willies to the Fenagh Cup but Sean Pierson is fiercely proud of Leitrim club football and it shows as he praised his own team and St. Mary’s last Sunday.

He may be the first non-Aughawillan native to lead the Willies to the Fenagh Cup but Sean Pierson is fiercely proud of Leitrim club football and it shows as he praised his own team and St. Mary’s last Sunday.

Speaking after Aughawillan’s first title in 20 years, Sean said “The one thing I wanted to do whether we won, lost or drew, was to show that these boys could play football. I kept saying Leitrim football is strong.

“I said that all year, there is nothing wrong with it, it is as strong as any county in the country and these guys showed their mettle there today, it was a brilliant game of football and it was a joy and a pleasure to involved in it.”

Sean’s analysis of the contest was a fascinating lesson in how teams set themselves up as Aughawillan started strongly and held on under ferocious St. Mary’s pressure in the last quarter - “We started strong but we knew we had to because St. Mary’s is a possession based team. If you didn’t start strong, you would let them dictate, they kind of close you out, snuff you out and put intricate hand-passes together and get players away.”

And he paid tribute to St. Mary’s own resolve under pressure - “In all fairness, they didn’t give up the ghost, they were believing, they really believed in themselves after halftime. We said that inside, these boys are going to come at us hell for leather.

“But at the end of the day, the miss up here spurred us on and then we got the rub of the green with the penalty and after that, it was really game over.”

That admiration extended to Tom Crowe as Sean felt the St. Mary’s man successfully counter-acted Aughawillan’s first half tactic of captain Noel Plunkett driving hard from defence and into the heart of the Carrick defence.

“Noel was driving forward, he has been doing that for us all year, he is a fantastic, fantastic footballer and he has that sort of canny, drop the shoulder and he is gone.

“In fairness to Tom, he counter-acted it in the second half, he switched it around and I said that Noel isn’t getting in the game as much, Tom is after doing his homework at halftime and I’d expect nothing less from Tom Crowe, a good football man.”

And although he doesn’t single out players, Sean highlighted the contribution of Man of the Match Gary Plunkett and Pearce Dolan - “What Gary done, he has been doing all year. He has two fantastic feet, he is as good a young footballer as there is about, kicking scores from 25, 30, 40 yards.

“The thing about Gary is that we have a serious belief that if we can get the ball in there to forwards, we believe we can cause trouble. The sign of a good player is that he performs on the big stage.

“A man I’d like to mention is young Pearce Dolan, he was outstanding, he caught balls in there in rucks of big lumps of men, he is only 16 years of age, an outstanding prospect. He kept working, no prima donnas, no going around with his head up high, he just kept doing the work.”