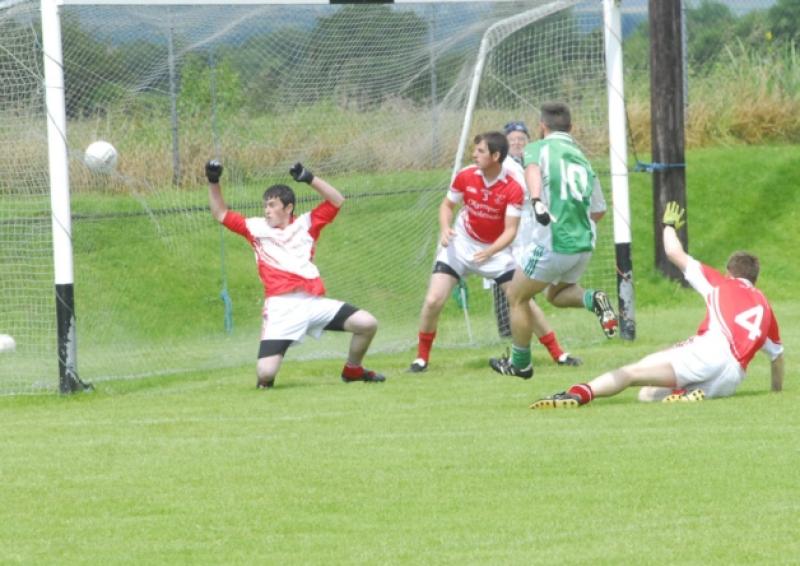 Mohill snatched victory over Ballinaglera in Sunday’s closely contested and exciting Gallogly Catering DivisionLeitrim Div 3 league final when Padraig Tighe coolly slotted a 30metre free between the uprights with almost the last kick of the game in Ballinamore to give his side the narrowest of wins.

Mohill snatched victory over Ballinaglera in Sunday’s closely contested and exciting Gallogly Catering DivisionLeitrim Div 3 league final when Padraig Tighe coolly slotted a 30metre free between the uprights with almost the last kick of the game in Ballinamore to give his side the narrowest of wins.

For a brave Ballinaglera outfit that was still in the lead with a little less that five minutes to go, it was a disappointing experience for them and a case of being so near and yet so far at the end.

Ballinaglera dominated the first half and should have been further that two points ahead at the interva but Mohill took the game much more to Ballinaglera in the second half and fought back to get on level the proceedings twice before claiming the title at the death.

After Seamie McMorrow put Ballinaglera ahead from a free, Mohill levelled when Stephen Flynn shot over from play. Fergal Wynne put Glera back in front when he shot a 12th minute point.

But Mohill took the lead for the first time two minutes after Barry Lupton finished a defence splitting move to the net.

Ballinaglera continued to hold the upper hand in the exchanges and got on level terms by the 16th minute after Seamie McMorrow and Fergal Wynne shot over in turn.

McMorrow put Ballinaglera back in front within the space of a minute when he whipped over a point for the North Leitrim side. However Stephen Conaty kept Mohill in the frame when levelled with a 20th minute point.

But two minutes later Ballinaglera regained the initiative when the lively Fergal Wynne pointed from play.

Ballinaglera continued to dictate matters and edged three points clear by the 26th minute after Seamie McMorrow tapped over a free and Tomás Cornyn shot a well-taken long range point from play.

Conor Beirne replied with a Mohill point soon afterwards to keep his side in contention. Before the break points were traded at opposite ends by Seamie McMorrow and Caillin Canning, to make the halftime score line read Ballinaglera 0-9 Mohill 1-4.

Over the next ten minutes Mohill hit three points without replay with Shane Canning, Alan Tuthill and Ronan Gordon finding the range to tie the scores. Ballinaglera regained the lead after Fergal Wynne fired over a 44th minute point and three minutes later the North Leitrim side went two points up when Patrick McGrail shot over.

Mohill surged for the last 12 minutes as Ballinaglera failed to score and seemed to tire.

Two Padraig Tighe points levelled the game. Mohill continued to drive on and Tighe was the hero as he converted a 60th minute free to seal a famous victory.