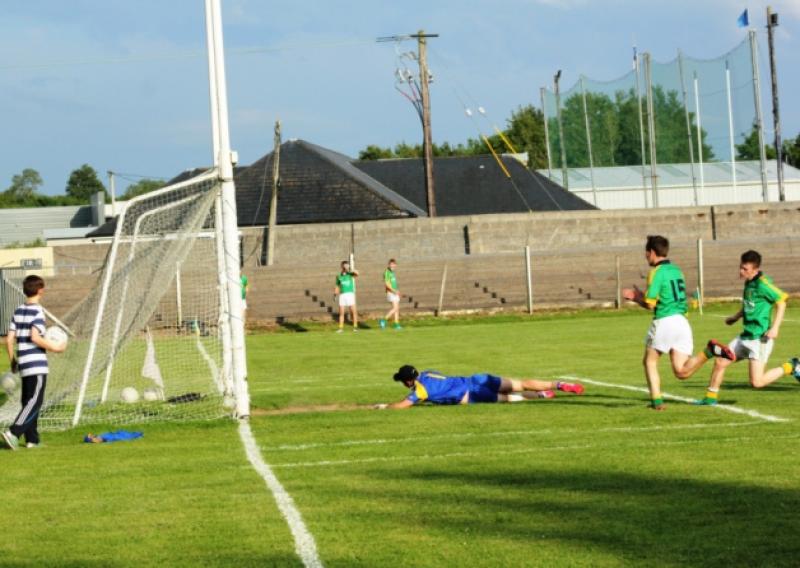 Leitrim began their Fr Manning Cup campaign with a hard fought battle against Roscommon last Wednesday in Pairc Sean MacDiarmada but it was the Rossies who went home smiling as they emerged with a one point win.

Leitrim began their Fr Manning Cup campaign with a hard fought battle against Roscommon last Wednesday in Pairc Sean MacDiarmada but it was the Rossies who went home smiling as they emerged with a one point win.

For large parts of the contest the game lacked urgency and intensity and resembled a training match although there were performers on both sides who impressed, none more so than Roscommon’s Brian Derwin who was a constant source of danger and deserved to be on the winning team.

Leitrim will use Wednesday’s game as a valuable learning curve as this is a team brimming with potential but they will know there is plenty of room for improvement.

Kick-outs proved to be problematic for Leitrim as Roscommon were able to overload the middle sector and more often than not they emerged with the ball. Wing-back Mikey Kavanagh was one of those who punished Leitrim on a regular basis as he pushed forward into unprotected space.

While they may not have been at their best as the game neared its finale, it was Leitrim who were brighter during the opening exchanges.

Peter Prior opened the scoring for Leitrim after a pass from Colm Kiernan just 15 seconds into the game but it didn’t take long before Roscommon’s Mikey Kavanagh struck to level matters, shrugging off two would be tacklers before slotting his shot between the posts.

A Riordan O’Rourke pointed free was followed by a fine score from Jack Gilheaney as Leitrim deservedly took the lead but there was a lack of cohesiveness to the attack even at this early stage.

After a 45 flew harmlessly wide in the 9th minute, Roscommon were to strike for two scores in three minutes courtesy of Séa Henry and a Brian Derwin free. Frustratingly from a Leitrim point of view the failure to secure possession from their own kick-outs was instrumental in both of those Roscommon scores.

With nothing to separate the sides after the opening exchanges, Leitrim pounced for a decisive breakthrough when they registered the game’s only goal in the 14th minute.

A quick free into the path of Colm Kiernan, whose run was not tracked, caused panic in the Roscommon defence and by the time the players in yellow and blue had a chance to recover, the ball was already in the back of the net after an assured and composed finish from Kiernan.

Leitrim failed to build on that score and allowed Roscommon reply with three unanswered points from Séa Henry and two from Brian Derwin (one free).

Roscommon levelled matters with three minutes of the first half remaining with a wonderful score from Derwin but Leitrim were to end the half on a high as Caleb Duffy pointed on the stroke of half time to give Leitrim a slender 1-5 to 0-7 lead.

Points were exchanged between Roscommon’s Séa Henry and Leitrim’s Jack Gilheaney but the first goalmouth incident of the half arrived nine minutes after the restart but it is not one Leitrim substitute Nathan O’Rourke will wish to dwell on.

Gilheaney and Colm Kiernan combined well with Kiernan forcing Roscommon goalkeeper Aaron Brady into an excellent save. The ball seemed to fall favourably for Nathan O’Rourke but the player, who wasn’t long on the pitch and possibly still getting used to the pace of the game, was unable to control the ball and the chance was gone.

Roscommon punished that miss within a minute when Brian Derwin pointed to level matters but to their credit Leitrim hit back with their best period of the second half.

Points in quick succession from Riordan O’Rourke (free), Caleb Duffy and Riordan O’Rourke hinted that Leitrim were to finish the game strongly but unfortunately that did not materialise as they failed to register another score during the remaining 18 minutes.

Inspired by Brian Derwin, Roscommon took the game to Leitrim during the final quarter and the talismanic full-forward scored four points - one free, one 45 and two from play to clinch victory. Leitrim did have one final chance but Riordan O’Rourke was unable to guide a free over the bar from a difficult position.

Next up for Leitrim in the Fr Manning Cup is a meeting with Kildare this evening, Wednesday, in Pairc Sean MacDiarmada.