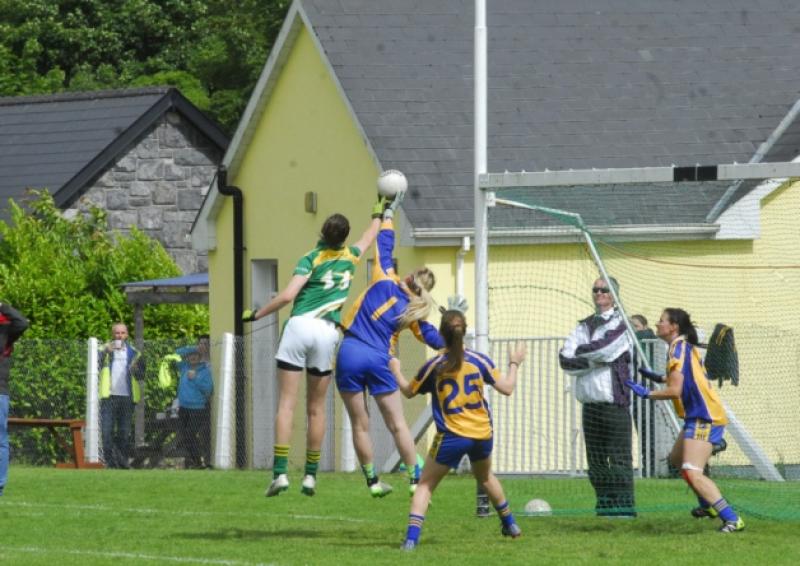 The Leitrim Ladies secured their place in the Connacht Intermediate Championship with a hard fought win over Roscommon in Croghan on Sunday last.

The Leitrim Ladies secured their place in the Connacht Intermediate Championship with a hard fought win over Roscommon in Croghan on Sunday last.

In what was an absorbing game Leitrim began quickly and scored two first half goals and those goals proved crucial as Roscommon came storming back in the second half and threatened to deny Leitrim at the death.

Starting the game in midfield Aine Tighe won the ball from the throw-in and quickly fed the ball upfield towards Carla LeGuen who in turn picked out Aileen Maguire who struck confidently to open the scoring.

During the opening stages Leitrim were first to every ball as they pushed high up the pitch and forced Roscommon into mistakes and Leitrim punished the hesitancy with an excellent point from Aine Tighe.

With Roscommon having made just one visit into the Leitrim half, Leitrim struck for a goal that all of a sudden put them in real control of the game. Deirdre Ward did brilliantly to offload the ball into the path of Aileen Maguire who clinically dispatched her shot to the goal.

A sixth minute point from Ailbhe Clancy extended Leitrim’s lead to six points but to their credit Roscommon refused to throw in the towel.

After a foul on Siobhan Tully, the excellent Jenny Downey was given an opportunity to open her side’s account and the corner forward made no mistake.

However, Leitrim were still bossing matters and moments later Aine Tighe left two players in her wake before slotting the ball between the uprights.

Approaching the midway point in the half Roscommon upped their workrate as they began to come to terms with the system being operated by Leitrim.

Jenny Higgins linked up with Martina Freyne who struck for her side’s first point from play and that was followed by another Jenny Downey pointed free which had been awarded after a foul on Siobhan Tully who had made an excellent run.

With 10 minutes of the half remaining Roscommon scored their third successive point when the full-forward line linked up well and Martina Freyne was on hand to reduce the deficit to just a goal.

Both sides key scorers, Aine Tighe and Jenny Downey exchanged converted frees before Leitrim struck for their decisive second goal with just a minute of the first half remaining.

Sarah McLoughlin’s shot appeared to be going wide but Aine Tighe did brilliantly to ensure it stayed in play and after she played the ball back to Anna Conlan the Dromahair midfielder made no mistake as she fired home from close range.

Roscommon wasted little time feeling sorry for themselves and they finished the half strongly with points from Jenny Downey (free) and Jenny Higgins to reduce the deficit to four points as Leitrim led 2-6 to 0-8 at the interval.

The second half began with a Jenny Higgins point, just 30 seconds after the restart and that was followed by two Jenny Downey frees to reduce the deficit to a solitary point and Roscommon had a chance to take the lead but were denied when Higgins’ thunderbolt of a strike cannoned off the underside of the Leitrim crossbar.

Having survived that let-off Leitrim replied with three Aine Tighe points, two of which were from frees to put Leitrim back in control.

There was no sign of Roscommon throwing in the towel and they hit back with points from Jenny Downey and Martina Freyne to leave three between the sides. Roscommon could actually consider themselves unlucky Freyne’s effort did not result in a goal but Michelle Guckian was equal to the effort and made an outstanding save as she turned the shot over the bar.

With three minutes remaining Leitrim were dealt a blow when Niamh Tighe’s involvement in the game was brought to an end when she was issued with a yellow card.

Roscommon closed the gap to two points when Jenny Downey converted another free but with two minutes left Caoileann Beirne was issued with a yellow card, just two minutes after being introduced as a substitute, meaning the numerical advantage was gone.

Three minutes into injury time Roscommon’s Laura Flemming pointed to leave just the bare minimum between the sides but that was a close as Roscommon were to get and it is Leitrim who advance to the Connacht Final against Sligo on July 12.