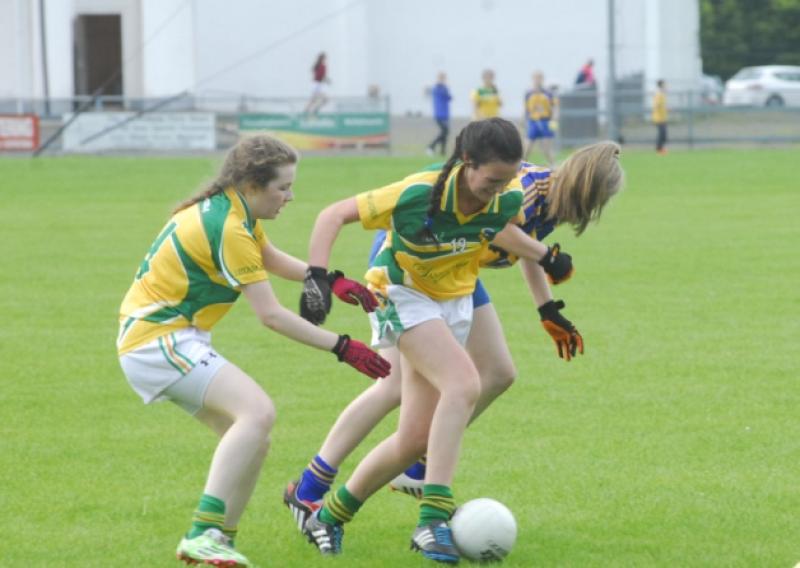 Two injury time goals from Roscommon did little justice to the battling efforts of Leitrim in last Wednesday’s Connacht U16 B Final in Ballyhaunis.

Two injury time goals from Roscommon did little justice to the battling efforts of Leitrim in last Wednesday’s Connacht U16 B Final in Ballyhaunis.

Just a week after failing to score against Galway and missing a host of quality players, Leitrim showed what they were made of with a battling display that frustrated a confident Roscommon as the Green & Gold battled against all the odds.

Roscommon were the better team on the night and deserved their win but found it very difficult to break down a fully committed Leitrim side who belied their poor group stages form to really push the favourites hard.

Leitrim struck for an early Aine Flood goal after eight minutes to give them an early foot-hold in the game and only trailed by a point at halftime.

Roscommon took over the second half and were leading by six points with five minutes to go as Leitrim were looking for a goal that would put Roscommon under fierce pressure.

Unfortunately, the goal did come and it came for Roscommon twice in added time as Leitrim’s brave resistance was finally breached.

Mairead Flood and Caoimhe Gaffney were not named on the original team-sheet but the two additions were the stand-out players of a great defensive effort from the Leitrim rearguard while Eimhin Quinn, Niamh Donegan, Niamh McNiffe and Emma McGovern did trojan work harrying and hassling the Roscommon attack.

Upfront, Ciara Reynolds and Aine Flood worked themselves to a standstill but Leitrim were cursed with poor shooting that let them down as the Roscommon defence left a spare player in defence.

Roscommon started well but had three wides before Aoife Gavin scored a good point but Leitrim struck decisively when Aine Flood pointed after a well worked move before a long ball into Hannah Farrell saw the full-forward find Flood and the Allen Gaels player no mistake with a fine goal on eight minutes.

Roscommon went straight down the field for Gavin to point but it was a determined Leitrim who were missing chances with two wides before Hannah Farrell saw a powerful shot diverted by Roscommon keeper Rebecca Cox onto the crossbar and then cleared.

Gavin and Clodagh Raftery added points to level the scores after 14 minutes. Roscommon continued to dominate but Leitrim were dangerous on the break, Emma McGovern seeing a shot blocked at close range.

Kiera Masterson saved a shot from Niamh Shanagher after Mikaela McHugh took a point as the goal beckoned. Leitrim hit back with their first score in 20 minutes thanks to a fine McGovern score and Hannah Farrell added a point after good work from Aine Flood.

Roscommon, however, added points from Gavin and Raftery to lead 0-7 to 1-3 at the halftime break, a lead extended when Raftery pointed a free a minute into the second half.

Gavin added another point a minute later before Roscommon made the decisive breakthrough for their first goal. A long ball found Aoife Gavin in space and her pass to Sinead Farrell, barely on the field a minute, saw the substitute produce a great finish for a goal.

With rain showers making conditions difficult, the scoring rate slowed significantly with both teams managing just a point each, Farrell adding a free for Roscommon while Eadaoin Clancy got Leitrim’s last score with nine minutes of normal time left.

Both teams started emptying the bench and Leitrim keeper Masterson made a good save from Roisin Wynne while Leitrim suffered a blow when Eimhin Quinn was sin-binned with less than four minutes to go.

Masterson made a good save to deny Farrell a second goal while Roscommon did have a goal disallowed in the follow-up for a square ball infringement but Roscommon did get their goals as subs Casey Keane and Sinead Glennon both found the net after great moves through the heart of the Leitrim defence.