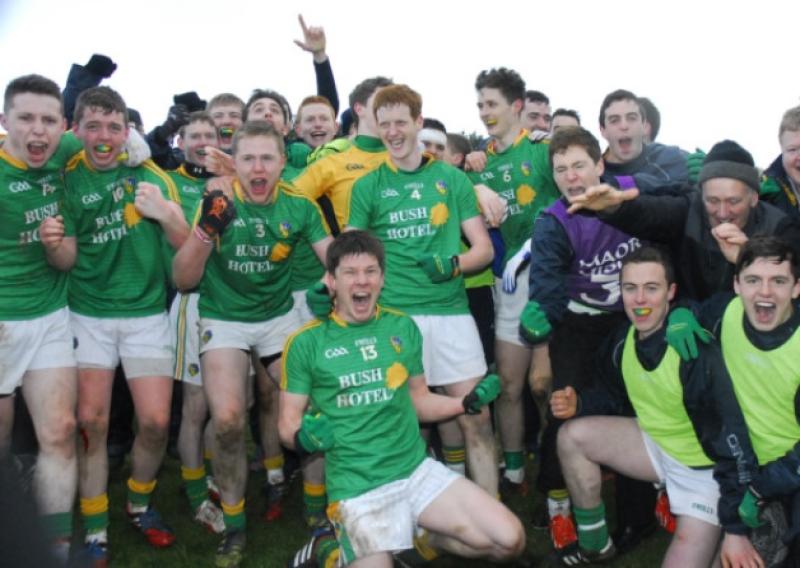 Not even the most optimistic of Leitrim supporters could have truly believed that Leitrim would dethrone the All-Ireland Champions Galway and from the odds they were offering it was clear the bookies certainly had no faith in Leitrim.

However, from the throw-in it was clear Leitrim were organised, well-drilled and extremely disciplined. As the game developed it also became clear that the men in green and gold were playing with a very real belief in themselves and their team mates.

The sight of Tomas Mulvey, with 13 on the back of his jersey oeprating just in front of his own full-back line was questioned by some home supporters who felt the approach was negative, but this was a Leitrim team with a very definite plan and they executed it to perfection.

In the first half, when playing with the wind Galway were invited into the Leitrim half but the tigerish and disciplined Leitrim defending when they approached the 45 meant Galway were often forced into overly ambitious shots.

The full-back line of Eanna Madden, Niall Woods and Enda Fowley were all outstanding but they were helped considerably by team mates who gave everything to the cause.

Galway began the game dominating in terms of possession and at th at stage of the game it looked as though the bookmakers may have been right regarding Leitrim’s chances.

Points from Cathal Mulryan and Sean Moran gave Galway a deserved lead inside five minutes before the home supporters were given their first opportunity of the afternoon to raise their voices.

Shane Quinn, who excelled in a number of roles over the course of the day, found Alan McLoughlin who pointed confidently.

That proved to be a rare foray into the final third of the pitch as Leitrim concentrated on matters at the other end of the pitch.

Despite the fact that they were under considerable pressure, there was never any sign of panic from any of the Leitrim players and that is a credit to the management team and how well they had this team prepared.

Fiontan O Cuanaigh re-established a two point lead for Galway and that was extended approaching the midway point in the half when Cathal Mulryan converted a free.

Two minutes later the deficit was increased further when Gary Kelly pointed from just inside the 45 but tellinginly there was still no sign of panic from any of the Leitrim players.

Trailing by four points with 12 minutes of the half remaining Leitrim were awarded a free close to the stand side of Pairc Sean. Donal Wrynn, who has been so impressive for the seniors this year was pivotal to Leitrim’s success and the free that he expertly struck from the ground reduced the deficit.

That score was immediately followed by another Leitrim point as Killian McGriskin surged forward before delivering a pass to Niall Brady. The corner forward looked from an early stage as though he had the beating of his man, a confidence that over the course of his gamebegan apparent in each of his teammates. When he received McGriskin’s pass, he turned quickly and shot between the uprights.

With six minutes of the half remaining the frustration of the Galway players became apparent when midfielder Michael Daly was issued with a black card for an off the ball foul on Enda Fowley.

However, Galway showed just why they are All-Ireland champions as the man who replaced Daly, Shane Walsh scored an excellent point immediately after his introduction.

That proved to be the final score of the half and as the Leitrim supporters contemplated on what they had seen in the opening 30 minutes there was much to be encouraged about and reason to be optimistic.

That optimism grew further when Leitrim opened the second half scoring and again it was Niall Brady who was causing problems for the Galway rearguard.

Galway practically owned the ball for the first three minutes of the half but they did little more than move it over and back the pitch in front of Leitrim’s well organised defence. When Leitrim regained possession the ball was delivered to Brady who beat his man and struck for a point to leave just two points between the sides with Galway leading 0-6 to 0-4.

Galway re-established a three point lead when Shane Walsh converted a free but by now Leitrim were coming more into the reckoning as an attacking force.

Nicholas Moore and Niall Brady (free) both pointed to leave just the minimum between the sides and when Cian Clinton scored a wonderful individual point with 10 minutes remaining the roar that echoed through Pairc Sean signalled the home crowd now sensed a first championship victory at this grade since 1998 was now a very real possibility.

Clinton then went one better when he struck to give Leitrim the lead for the first time with Niall Brady excelling in creating the opportunity.

Galway looked shellshocked but there was no sign of them throwing in the towel and with two minutes remaining substitue Damien Comer pointed and it looked as though the game was destined for extra-time.

However, there was to be one final twist as Leitrim struck for a winner as the clock showed just a matter of seconds of the 60 minutes remaining. Shane Quinn and Micheal Ferguson combined to find Niall Brady and it was appropriate that it was the Glencar/Manor who struck the winning point to signal the start of the celebrations.