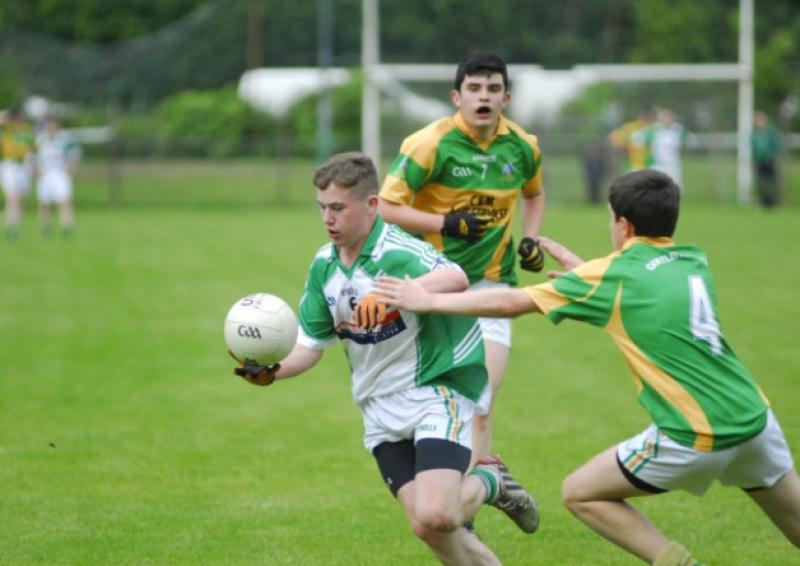 Aughavas powered their way to an impressive victory in the U-16 11-a-side League final on Thursday evening last when they overcame Gortletteragh.

Aughavas powered their way to an impressive victory in the U-16 11-a-side League final on Thursday evening last when they overcame Gortletteragh.

While the first half was a tight and competitive affair, Aughavas were always able to keep their opponents at arms length and in the second half when Gortletteragh were reduced to 10 players they took full advantage.

Seamus Sweeney was in exceptional form as the Aughavas captain gave a fine display of passing and shooting as he finished with a personal tally of 10 points and the likes of Fintan Gallogly, Eoin Kenny, Daragh McCabe and James Canning were all instrumental to their sides cause.

From a Gortletteragh point of view, the performances of James Heslin, Dylan Ward and Keoghan McGovern were signs of encouragement but ultimately they were not enough.

The action packed game began with Fintan Gallogly opening the scoring inside the opening minute before Dylan Ward replied a minute later with a free.

Aughavas regained the lead in the fifth minute with a fine individual point from the lively James Canning and they took control from that point.

With 10 minutes of the half remaining, they led by six points but Gortletteragh brought themselves back into contention with the game’s opening goal.

Keoghan McGovern powered through the Aughavas defence and then unleashed an unstoppable shot and the Gortletteragh faithful were given further reason to cheer a minute later when Dylan Ward struck for a fine point.

Aughavas responded well to that Gortletteragh pressure with points from Eoin Kenny and Seamus Sweeney but they had Diarmuid Casey to thank as the game approached half time when he cleared Dylan Ward’s shot off the line.

Leading 0-13 to 1-5 as the second half got underway the Aughavas management would have been pleased but also aware there was no room for complacency and the second half started well from their point of view.

Seamus Sweeney converted a free a minute after the restart after he was fouled by Darragh McPartlan who received a yellow card. Unfortunately for McPartlan a minute later he was issued with a black card meaning referee Jimmy Stenson was forced to automatically show a red card.

Both sides were guilty of wayward shooting as Seamus Sweeney’s free was the only addition to the scoring over the next 10 minutes.

Victory was all but secured when James Canning showed good awareness to pounce for an opportunistic goal and that was followed by points from Seamus Sweeney and two from James Canning as Aughavas further stretched their lead.

Gortletteragh’s perseverance was rewarded two minutes from the end when they were awarded a penalty when James Heslin was fouled and Dylan Ward expertly dispatched the shot into the top corner.

Ultimately that was to have little bearing on the result as Aughavas finished with three points to claim a deserved win.