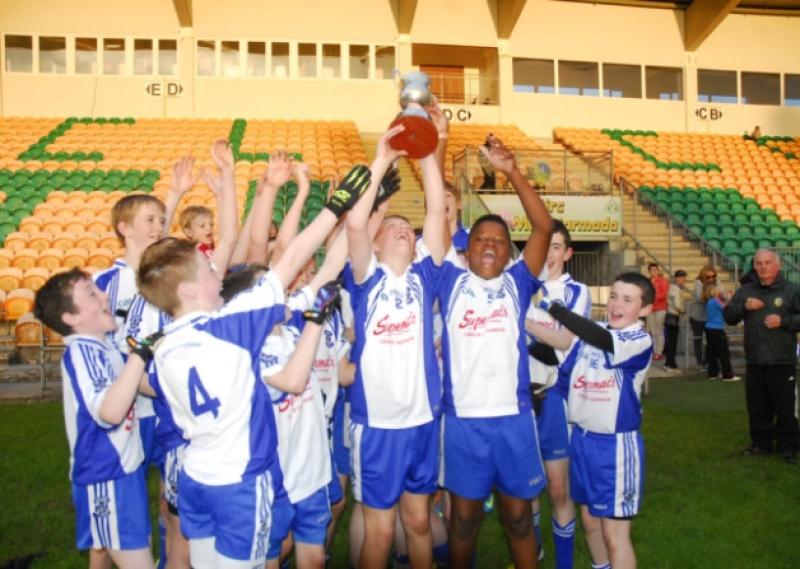 Gaelscoil Liatroma completed a remarkable double in some style last Thursday in Pairc Sean Mac Diarmada when they proved too good for St. Patrick’s Ballinamore in the Division One Final.

Gaelscoil Liatroma completed a remarkable double in some style last Thursday in Pairc Sean Mac Diarmada when they proved too good for St. Patrick’s Ballinamore in the Division One Final.

On the face of it, a win for the Carrick based school was not all that remarkable but their Division One victory had been preceded by a win for the school’s B team, drawn from third, fourth and fifth class students, over Drumkeerin in the Division 2 Shield Final.

It was a remarkable achievement to field two teams but to win on the double is a feat that is unlikely to be repeated in the years ahead.

The final score might give the impression of a relatively easy day for the Gaelscoil but they had to fight hard to hold off a stubborn and determined Ballinamore.

The difference between the two was seen in the fact that Ballinamore relied almost entirely on the impessive Ryan Donohue for scores and leadership with the likes of Francis McGovern, Dylan Beirne, Sean Christy, Senan Harte and Mark McCaffrey working hard.

In contrast, the Gaelscoil lads looked a more potent combination and while a lot of their scores cames from frees, their overall team-work, accurate passing and hard work proved too much for Ballinamore to counter.

Paul Keaney took the scoring plaudits but Gaelscoil were driven by Sam Barnes and David O’Connell in the middle of the park, Barnes the smallest midfielder on show but perhaps the most influential as his tackling, hard running and passing was impressive.

Full-back Sean Reynolds, Eoghan Farrell at centre-back and Fiachra King were others to really catch the eye.

David O’Connell with a point and a cracking Fiachra McHenry catch and goal put Gaelscoil in command at halftime as two Donohue points left the score at 2-5 to 0-4.

But that was to be it for Ballinamore as Gaelscoil steadied themselves with a McHenry point before two points apiece Sam Barnes and Keaney sealed the win.