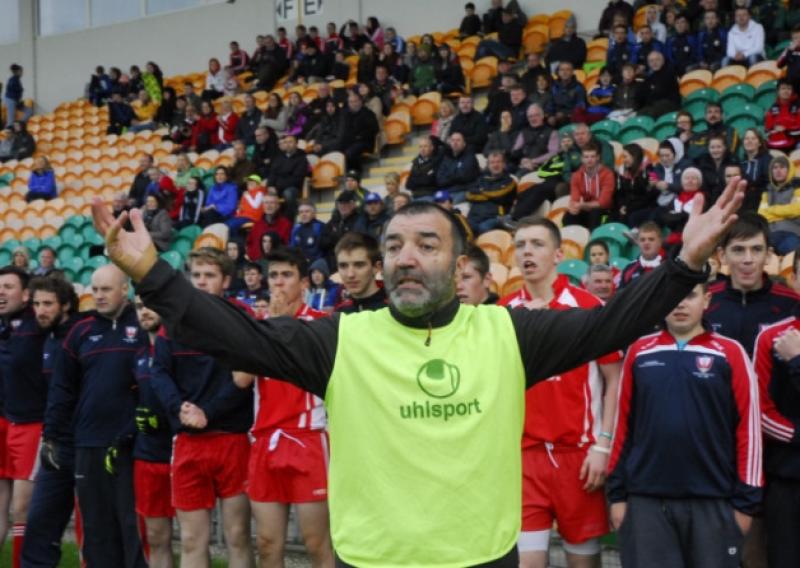 Gerry Ballantine has always been quick to praise his players when their efforts merited such acclaim but after last Sunday’s defeat, he was left pondering how his team had failed to perform to anywhere near their ability.

Gerry Ballantine has always been quick to praise his players when their efforts merited such acclaim but after last Sunday’s defeat, he was left pondering how his team had failed to perform to anywhere near their ability.

Offering his initial assessment of the game Gerry said, “We’re hugely disappointed with the performance, I’m a bit shell shocked. The fact that we didn’t perform, I wouldn’t have predicted that. I thought we would at least perform and put it up to them.”

The competitive nature of the Dromahair manager meant that the heavy defeat was something that hurt him and he was not yet ready to focus on the fact that with the Intermediate Championship secure it has been a hugely successful year for his team.

“You still have to look at every game you play and ask yourself were we competitive, and if not why? That is going to put a big question mark over the end of the season as to why we weren’t competitive in this game from a management point of view. I don’t like losing, like anybody else, but I really don’t like the situation where we haven’t performed at all.”

When it was put to him that perhaps an inferiority complex hinders players when they face clubs from counties such as Mayo Gerry replied, “We tried to guard against that but you don’t know what’s going on in everybody’s heads.

“We have no excuses on the day, we just weren’t good enough and we didn’t perform at all. I don’t think we were hungry enough, I don’t think we asked enough questions. I don’t think we turned up with the mentality that we were really going to take this game on and we ended up on the back foot for all of it.”

Reflecting on the game, Gerry felt the two first half goals were a blow his side struggled to recover from.

“The two goals in the first half really gave us a huge mountain to climb and allowed them to funnel back and draw us on and we just didn’t have the power to get through them and that’s what it boils down to, they were more powerful.”

Trailing by eight points at the break Gerry revealed he “emphasised that we were going to have to be patient and chip away and not go crazy looking for goals. We didn’t win enough ball high up the field to put them under pressure to get the score, they were dominating in the middle third. That gave them a huge platform and left us on the backfoot for the whole game.”