Dromahair brought back down to earth 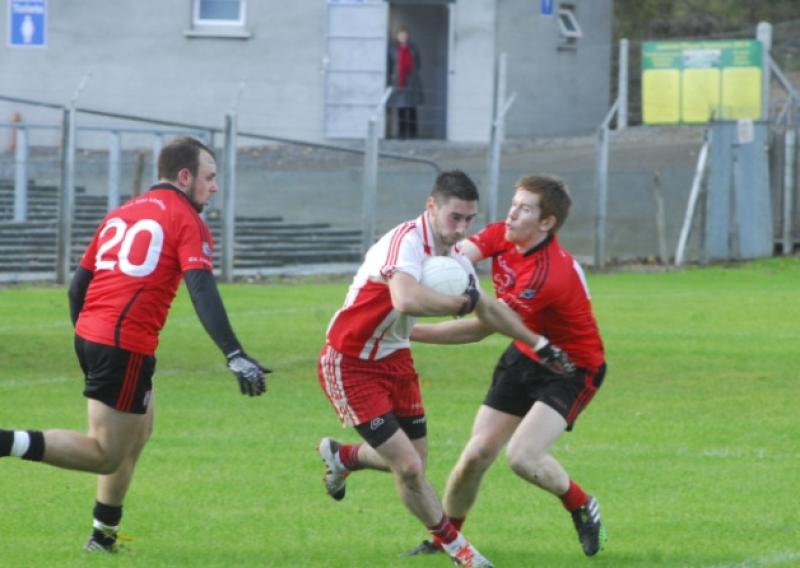 For a team that had performed with such hunger and composure during the County Championship, when Ballyhaunis asked questions of Dromahair, there were no answers to be found.

Much was known of Keith Higgins, the Mayo star who operates from centre back but in reality Ballyhaunis had match winners all over the pitch with their full-forward line terrifying the defence over the course of the game.

The speed and movement of Kevin Byrne, Niall Prenty and in particular man of the match Morgan Lyons was something the Dromahair never came close to contending with.

Frustratingly for the Leitrim champions, when they attempted to clear their lines, more often than not the ball ended up being played in the direction of the outnumbered Robbie Cunningham who was too isolated in the Dromahair full-forward line.

The importance of the Intermediate Championship victory was evident to all who witnessed their win over Ballinamore in the Championship Final, but it was clear that Dromahair struggled to reach those same heights.

That is not to take away from Ballyhaunis who were fully deserving of their victory, having bossed the game in all areas of the pitch and in reality such was their dominance, the winning margin could have been more but for some last ditch interventions from Kieran Meehan in the Dromahair goal.

It was unfortunate Dromahair were not able to produce their best, but they did actually begin the game with a hunger and purpose that suggested they believed they could advance in this competition.

The game was less than a minute old when Paddy McGowan judged the strong, swirling wind to perfection as he pointed to give Dromahair an early lead.

A minute later it got even better for Dromahair when they doubled their lead with a Robbie Cunningham point. The score was made by a wonderful Declan Fowley interception and he then released Cunningham who briefly had sight of the Ballyhaunis goal before opting to slot the ball over.

Ballyhaunis opened their account in the sixth minute when Morgan Lyons pointed from the left wing.

That score didn’t seem to affect the confidence of the Dromahair players as they re-established their two point lead with Cian Clinton’s ninth minute free.

However, that would prove to be a final high point for Dromahair as Ballyhaunis took control and quickly moved through the gears to ensure the game was over as a contest long before the end.

An Eoghan Collins pointed free reduced the deficit to a solitary point and in the 12th minute Ballyhaunis struck for the game’s opening goal.

As Kevin Gallagher attracted the attention of the Dromahair defence he spotted the run of Morgan Lyons and timed the offload to perfection. With the defence now exposed, Lyons ran at pace while the defence thought about whether to go to the full-forward or hold their position.

In the end it didn’t matter what the defence did as Lyons opted to shoot early and his powerful shot flew into the Dromahair goal to cancel out Dromahair’s bright start.

Three unanswered points from Lyons (free), Kevin Gallagher and Eoghan Collins (free) extended the Ballyhaunis lead to five points although John Evans indicated there was still some fight in Dromahair when Rory Kelly bombed forward before linking up with Gerard Kelly and Evans was on hand to beat two defenders and then point.

However, rather than herald a Dromahair comeback, that score was followed less than a minute later by Ballyhaunis’ second goal and once again it was Morgan Lyons who was on hand to punish Dromahair.

Kevin Byrne and Fergal Kelly linked up well before Kelly played a perfectly timed ball to Lyons with a flick over his shoulder and Lyons then dispatched his shot past Kieran Meehan.

A Niall Prenty point, as the game headed towards injury time, meant the loss of Kevin Byrne to a black card wasn’t as significant a blow as it may otherwise have been as it was looking good for Ballyhaunis at half time as they led 2-7 to 0-5.

A good start to the second half was essential for Dromahair if they were to have any chance of an unlikely comeback but it was Ballyhaunis who looked the hungrier and they dominated the second half to such an extent that Dromahair didn’t add to their tally until injury time at the end of the game.

Before that Ballyhaunis added to their tally with a third goal, nine minutes after the break. Kevin Gallagher and Eoghan Collins combined to carve open the Dromahair defence and after Collins’ effort hit the crossbar Jarlath Carney was on hand to goal from close range.

The remainder of the game lacked any real intensity as Ballyhaunis saw out the game for a deserved, but all too easy victory.