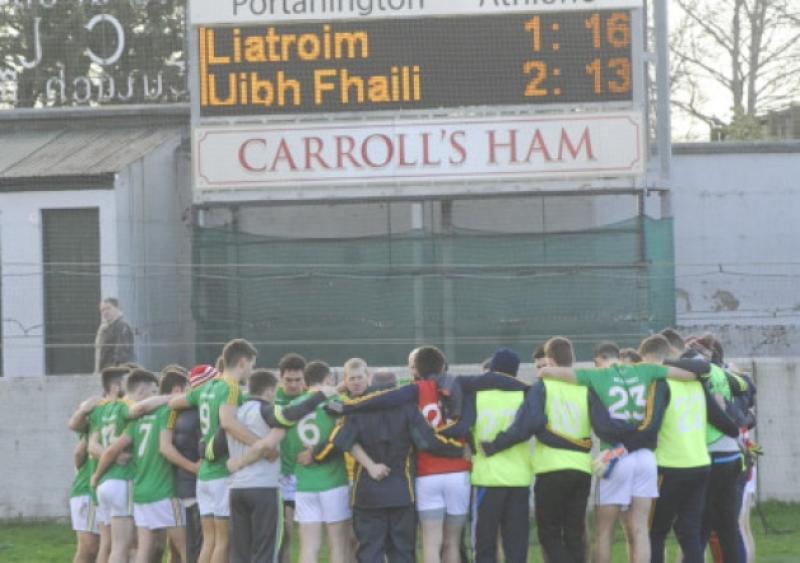 A draw, when victory was within grasp, may not seem like reason to celebrate but for Shane Ward, last Sunday in Tullamore was a day when the Green & Gold gave a glimpse of real potential.

A draw, when victory was within grasp, may not seem like reason to celebrate but for Shane Ward, last Sunday in Tullamore was a day when the Green & Gold gave a glimpse of real potential.

Trailing by nine points against Division leaders Offaly and without the key figure of Donal Wrynn, Leitrim looked in perilous trouble as they trailed by nine points immediately after the resumption of the second half.

But then something happened - a long ball into James McGrail saw the Leitrim full-forward fouled, Kevin Conlan drilled home the penalty and suddenly the game was turned on its head as the Green & Gold started to boss the middle of the park.

With Ronan Kennedy & Kevin Conlan tormenting the Offaly defence, the home side started to panic, three times their complaints caused referee Niall Cullen to move long range frees into scorable positions and three times the ball flew over the bar.

So much were Offaly in disarray over the final 20 minutes that once Leitrim got within shouting distance, you’d have bet your house on Leitrim emerging victorious but there was one final twist in the tail as Offaly twice drew level and were in possession when a tumultuous 73 minutes of action came to an end.

You’d have got long odds on such a situation in the first 20 minutes as the Offaly full-forward line played hell with the Leitrim defence and inaccuracy against the strong wind cursed Leitrim’s scoring efforts.

But even as Offaly hit two goals in the first half, there were signs that Leitrim were not off the pace, their inability to take their own scores the greatest difference between the teams as Shane Ward’s team gradually got to grips with the Offaly men.

The second half was a revelation, worlds away from the defeat against Antrim, as tigerish and disciplined defending stopped Offaly in their tracks time and time again in the second half.

Upfront, Ronan Kennedy was outstanding as his ability to find space was something Offaly never got to grips with while the dead-ball accuracy of Kevin Conlan was a huge asset as he scored his entire 1-6 from placed balls.

Darren Sweeney & Shane Moran were top class in the middle of the park, James McGrail did tremendous work at full-forward and midfield while it was hard to pick just one player out of the defence who shone in the second half, although the leadership of Gary Reynolds, Sean McWeeney and Fergal Clancy was huge.

It is tough when victory is snatched from your grasp but Leitrim will take a lot from this encounter for the remainder of the League campaign as it very definitely showed the potential that is there.

Offaly got off to a blistering start, William Mulhall firing over a free before Bernard Allen broke his way through the Leitrim defence, Cathal McCrann half blocking his shot before Nigel Dunne tapped the ball across the line on two minutes.

Shane Moran started off an impressive afternoon with a lovely fourth minute point before Mulhall and Ronan Kennedy swapped points and a free. James McGrail should have found the net but his low shot was easily saved by keeper Alan Mulhall.

The ball was soon in the net but at the wrong end, Mulhall blasting a great shot past a helpless McCrann on 14 minutes. Nigel Dunne and Niall Darby added a point either side of a curling Fergal Clancy point before Dunne extended the lead.

Ronan Kennedy was becoming more influential and two points in two minutes narrowed the gap but Allen & McNamee pointed to leave the halftime score at 2-7 to 0-5, a lead extended to nine points when Mulhall converted a first minute free two minutes into the second half.

But Leitrim started to fight back - Ronan Kennedy swept over a fine point before a long ball found McGrail on the edge of the square. McGrail won the ball but was fouled from behind by the full-back, allowing Kevin Conlan to drill home the spot-kick.

Almost immediately, Alan McLoughlin fired over a fine point but Offaly looked to have recovered when Mulhall and Niall McNamee both pointed by the tenth minute. Again Leitrim came back with points from Darren Sweeney and McLoughlin.

Another Mulhall free left five between the teams but Leitrim were growing more and more dominant and a huge Fergal Clancy point with 16 minutes left sparked a remarkable Leitrim surge that saw Kevin Conlan convert five frees over the next nine minutes to take the lead.

The midlanders were disputing decisions at every turn and Leitrim were surging forward at every opportunity but going behind finally seemed to concentrate their minds.

Leitrim did have a chance to go two in front but Ronan Kennedy hurried his shot, the ball going well wild and Offaly took advantage with Niall Darby converting an amazing free into the wind from well out beside the right wing.

But Leitrim came straight back, Niall Woods being fouled after a panicked Offaly clearance, Ronan Kennedy stepping up to convert the free with time running out But Offaly weren’t finished and a rash challenge led to a Mulhall free that was converted and ensured the game ended all square.