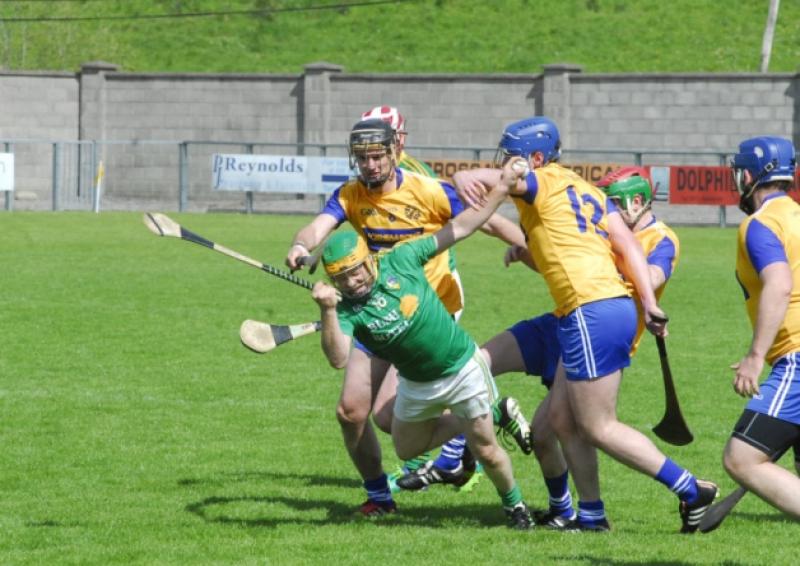 Leitrim kept their hopes of Lory Meagher glory alive on Saturday last when they overcame a spirited Lancashire and the elements in Ballinamore.

Leitrim kept their hopes of Lory Meagher glory alive on Saturday last when they overcame a spirited Lancashire and the elements in Ballinamore.

With the wind at their backs and Padraig O’Donnell in inspired form Leitrim bossed the opening 35 minutes.

Leitrim captain James Glancy lined out at corner forward but when the game got underway he dropped, acting as a shield in front his defence leaving O’Donnell and Zak Moradi to operate as a two man full-forward line.

Moradi opened the afternoon’s scoring with a fine point from a wide right position, just 50 seconds after the throw-in but Lancashire soon hit back with the deadly accurate Colm O’Callaghan converting a free to level matters.

O’Donnell edged Leitrim back in front with a fifth minute free and the man from Abbeyknockmoy gave a glimpse of his striking ability when he slotted an excellent shot between the Lancashire uprights from close to the touchline.

After both sides endured a period where all they had to show for their efforts were wides, Leitrim and Padraig O’Donnell in particular rediscovered their scoring touch.

Lancashire’s Reamonn McEntee could perhaps consider slightly fortunate that after being issued with a yellow card he avoided a second one when he fouled Colm Moreton. McEntee avoided further punishment from referee James Clarke but O’Donnell did make Lancashire pay as he converted the resulting free to open up a six point lead for the home side.

The final 10 minutes of the half saw the game step up a gear in terms of excitement as Lancashire, perhaps realising the game was slipping away from them began to up their performance.

Brendan McAuley struck for Lancashire’s second point of the game in the 24th minute but Leitrim hit back in style with Colm Moreton striking from distance and under considerable pressure.

Again Lancashire came storming back when the excellent Colm O’Callaghan got the better of Paul Earley and struck for an excellent point.

Leitrim were in no mood to surrender the lead they had worked so hard to establish and just seconds later Zac Moradi was on hand to point for Leitrim. With the momentum behind them Moradi had another sight of goal just moments later but on this occasion Lancashire goalkeeper Patrick Duggan was on hand to make an excellent save.

Padraig O’Donnell (free) and Nathan Unwin exchanged points before the first half scoring was completed by the ever reliable Padraig O’Donnell who converted another free to give Leitrim a commanding 0-11 to 0-4 lead at the break.

Leitrim would have been all too aware that with the wind at their backs in the second half Lancashire would pose a significantly greater threat and with Colm O’Callaghan in fine form they had to be aware of the danger of conceding soft frees as the Fullen Gaels man looked capable of converting from almost anywhere.

Within two minutes of the restart O’Callaghan served a further reminder of the threat he posed as he converted a free but Leitrim replied with the all-important breakthrough goal.

Padraig O’Donnell did very well to sidestep his marker and then delivered an unstoppable shot past Patrick Duggan to give Leitrim a healthy nine point lead.

Lancashire were much improved in the second half and they hit back with a Conall Maskey point but Leitrim were still a threat and Padraig O’Donnell will feel he should have had a second goal 10 minutes into the second half but had to settle for a point.

The well organised half back line of Kevin McGrath, Clement Cunniffe and Joe Earley made life difficult for Lancashire but their pressure paid dividends and four unanswered points from O’Callaghan, three from frees brought Lancashire right back into contention before Leitrim’s chief marksman, Padraig O’Donnell hit back with two points, one of which was from a free.

The closing stages of the game saw Lancashire continue to push in a bid to reel in the Leitrim lead and to their credit they came incredibly close to doing just that.

Two Colm O’Callaghan points, one from a free and the other from a 65 reduced the deficit to just five points.

Kevin Ward and Liam Moreton points for Leitrim and Kevin Magee and Nathan Unwin points for Lancashire meant the gap remained at five points as the game entered the final minute.

The Lancashire pressure yielded a late goal when Liam Knocker’s free from the halfway line found the Leitrim goal via a couple of deflections but that was to be as close as the exiles would get as Leitrim saw out the game and claimed a deserved victory after an exciting encounter.