Leitrim battle to the end but Galway just too strong 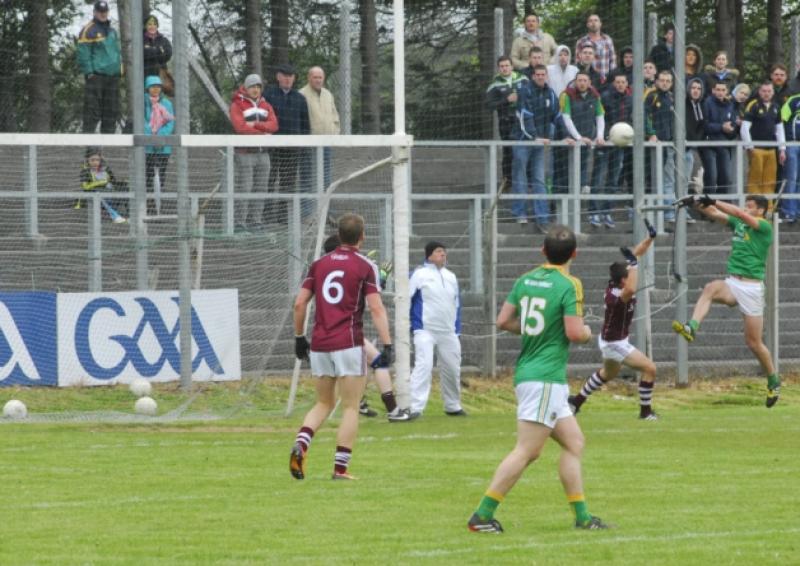 A battling performance, yes, but defeat was again Leitrim’s fate as Galway proved that physical strength and an abundance of talent will overcome any amount of fighting spirit and organisation.

A battling performance, yes, but defeat was again Leitrim’s fate as Galway proved that physical strength and an abundance of talent will overcome any amount of fighting spirit and organisation.

The odds were very much stacked against Shane Ward’s largely inexperienced team before ever a ball was kicked but there were enough small signs to suggest that although it may take time, Leitrim are starting out on the right track.

It is easy to slam Leitrim’s display and some aspects, like 27 minutes without a score in the second half, don’t make easy reading but Leitrim faced a Galway team that married huge physicality and talent with an organised and often times streetwise game-plan.

But Sunday’s performance offered infinitely more hope than the eight point loss to Roscommon last year, a hell of a lot more positivity than the draw and defeat to London two years ago and isn’t even in the same ball-park as what happened in McHale Park three years ago.

This Leitrim team is a new team, shorn of stalwarts like Paddy Maguire, Emlyn Mulligan, Paul Brennan, the Beirne brothers, Wayne McKeon, James Glancy, Ray Cox, the Hickey brothers and while manager Shane Ward has emphasised this is a new team built for the future, the absence of those players was sorely felt last Sunday.

Five debutantes started on Sunday, another two saw their first championship action as subs while another three were in just their second campaign for the county - Shane Moran who impressed in the middle of the park seems like a veteran with just two campaigns and three years behind him.

This is not papering over cracks, you always got the feeling that Galway could have gone for the jugular at any time, but it does illustrate the size of the task facing Shane Ward in the years ahead.

It would be easy to play a game of what if - what if Donal Wrynn had managed to find the net with either of his two chances in the first seven minutes? Or what if Ronan Kennedy had drilled the ball to the net at the end of first half, going for the far post instead of the near one.

Or indeed, what if Donal Wrynn managed to pull his shot inside the far post just 15 seconds into the second half instead of outside it?

But the game of “what if” is largely irrelevant - the misses were a symptom of Leitrim’s inexperience, any goal, particularly Wrynn’s effort just after halftime, would have certainly given the Green & Gold an enormous boost but you got the feeling that Kevin Walsh’s side would have had the answer to anything thrown at them by the home side.

Galway came prepared for an ambush and after weathering the early stages where an enthusiastic Leitrim caused them some uncomfortable moments, they began to stamp their authority all over the contest.

Running straight lines at a densely packed Leitrim defence was never going to catch the imagination of fans but it did yield scores for man of the match Paul Conroy and eventually wore down a spirited Leitrim defence.

Galway’s game-plan also signified the end of one of the game’s great romantic sides as the Tribesmen embraced a more streetwise approach. The free-flowing, all out attack that was the hall-mark of Galway teams was out, instead we got a well drilled and highly organised Galway who never deviated from their game-plan.

That game-plan was to send long ball into Damien Comer in an effort to beat the massed defence, which worked with devastating consequences on one occasion, or crashing straight up the middle to wear down the Leitrim defence and win frees.

With Leitrim’s refusal to leave themselves open to a scavenging from the vaunted Galway attack, it meant spectators were treated to a dull and drab encounter.

Galway’s street smarts were just as obvious in the second half as they did just enough to pad their lead without over-extending themselves while tactical fouling meant that nobody was able to work up any sort of flowing momentum.

With fans leaving early and a distinct lack of atmosphere, both sides concentrated on stopping each other and it led to what frankly became a boring encounter, conversations of fans in the Main Stand clearly audible.

But there were positives for Leitrim, as well as a few negatives - Shane Moran did very well against a highly rated Galway midfield pairing, working his socks off and getting forward with quite a good deal of power.

Ronan Gallagher fought tooth and nail with Comer, emerging with much credit. Sean McWeeney exploited space cleverly on the wing but his effectiveness was clearly reduced by a yellow card.

The ball carrying of Gary Reynolds was obviously targeted by Galway who never allowed him to develop any momentum while Danny Beck’s work-rate was a great compliment to a hard working defence.

Up front, Leitrim worked hard but it just didn’t come off - Ronan Kennedy showed flashes of what he is capable of but Fergal Clancy and Kevin Conlan were forced too deep in search of possession.

James McGrail, Thomas Mulvey, Niall Woods and Matthew Murphy never got to show what they are really capable of but the harsh learning lesson will stand to them.

Paddy McGowan must be pushing for a starting place after a strong showing when introduced while Jonathan Connolly brought a huge amount of energy and pace to the wing back role.

Darren Sweeney and Cathal McCrann gave everything and couldn’t be faulted but Galway’s more conservative approach ensured that an ambush was unlikely to come off last Sunday.

The result might have been the same as in the past but there is the distinct impression that this crop of Leitrim players will absorb the lessons far better and move on. If they do just that, it will be a major step forward. It will take time but after a number of years of embarrassments, on and off the field, Leitrim are definitely heading in the right direction.