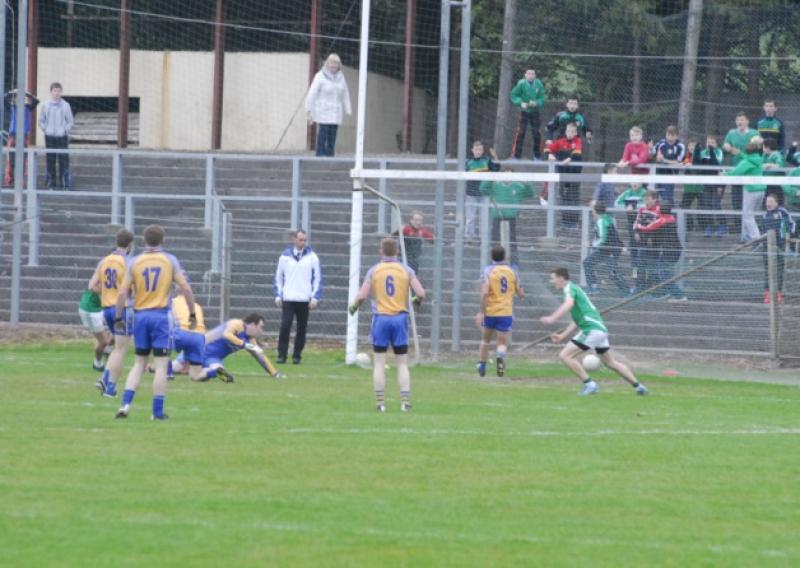 Nine years after he scored the match winning point against St. Mary’s, Ronan Kennedy was an even more dramatic match winner as Mohill shattered Glencar/Manorhamilton hearts with a last gasp injury time goal to claim the Fenagh Cup.

Nine years after he scored the match winning point against St. Mary’s, Ronan Kennedy was an even more dramatic match winner as Mohill shattered Glencar/Manorhamilton hearts with a last gasp injury time goal to claim the Fenagh Cup.

Kennedy’s goal, with literally the last kick of the game, snatched the 2015 Connacht Gold Senior Championship crown from the hands of Glencar/Manorhamilton who had delivered a defensive master-class and seemed poised to ascend the steps in Pairc Sean to collect the cup.

But in Roy of the Rovers stuff, Mohill won a late free, cleverly taking it short so that the “square ball”rule wouldn’t come into play. Incredibly, two Mohill men almost had their hands on the ball but it broke off them and was cleared, seemingly to safety.

But in the desperation to clear the ball, a hand pass to the long serving Dominic Kelly, a member of their five championship winning teams since 1999, saw the Manor man surrounded, the ball knocked loose in a tackle.

Alan McLoughlin scooped the ball up and took what looked like a shot at goal but it never had the height or power.

But whatever divine intervention was on Mohill’s side, the ball fell right into the hands of Ronan Kennedy who flew across the face of the Manor goal, side-stepping the excellent Pat Gilmartin, who had the misfortune to slip, and considering the high stakes, the Mohill man shot low and hard to the net for the game winning score.

It was a finish out of keeping with the entire game that was dominated by defensive systems and incredible commitment along with a lot of waste for both teams.

Ronan Flynn opened the scoring after just a minute from a tight angle, a long ball into Conor Dolan being worked back out. That score was either side of two Manor missed chances, an Adrian Croal wide and a Dolan shot into the keeper.

Mohill drew level when Keith Beirne showed well in front of Pat Gilmartin, gathering a free and sending a high arching shot over the bar on six minutes. Shane Quinn and Keith missed chances before Darren Sweeney swung a 50 yard free over the bar on ten minutes.

Conor Dolan was narrowly wide but a well worked move involving Evan Sweeney, James Rooney and James Glancy ended with Dominic Kelly firing over a point on 15 minutes, a two point lead that was already looking huge in a tense game.

Ronan Kennedy hit a wide before James Rooney and Pat Gilmartin got in a mix-up in defence, Ronan Kennedy being fouled and Keith Beirne converting for the last score of the first half with ten minutes left to play.

Mohill started to dominate until halftime but had bad wides from Kennedy, Ronan Gallagher, Shane Quinn, Darragh Gordon while Beirne saw a shot blocked and Ronan Kennedy shot across the face of goal.

Halftime saw Glencar/Manor with a scarcely believable 0-3 to 0-2 lead with sub Domhnaill Flynn shooting wide after a lengthy Mohill build up.

However, Mohill did draw level when Ronan Gallagher broke through, a goal briefly appearing on the cards as Keith Beirne was free in support but the County man shot early to tie the scores.

Mohill then went in front on four minutes after Adrian Croal lost the ball, a long ball up to Ronan Kennedy seeing him feed the County Minor for a fine point.

Glencar/Manor’s response was instant - Conor Dolan converted a free after a foul on Croal before Paddy Maguire scored a huge point on eight minutes.

After four points in the opening eight minutes, we didn’t have another score for 20 long and tension filled minutes as both sides seemed content to indulge in trench warfare.

Keith Beirne had a shot hit the post and drop wide, Darren Sweeney’s long free was caught and spilled by keeper Dermot Scollan, Beirne and Beck had bad wides for Mohill with sub Niall Brady, Killian McGriskin and Croal all similarly guilty for Glencar/Manorhamilton.

But as the game wound down, Glencar/Manorhamilton were growing in confidence while Mohill looked to be wilting and when Paddy Maguire’s cross-field pass was gathered by Adrian Croal with just over two minutes of normal time left, the former Leitrim star hoisted a great point over the bar for what looked like a match winning two point gap.

Mohill had a chance to hit back but Alan McLoughlin hit his free in the dying seconds of normal time but the drama was only beginning as Kennedy snatched a goal that will go down in Leitrim GAA folklore.