Minors improve but Galway win out 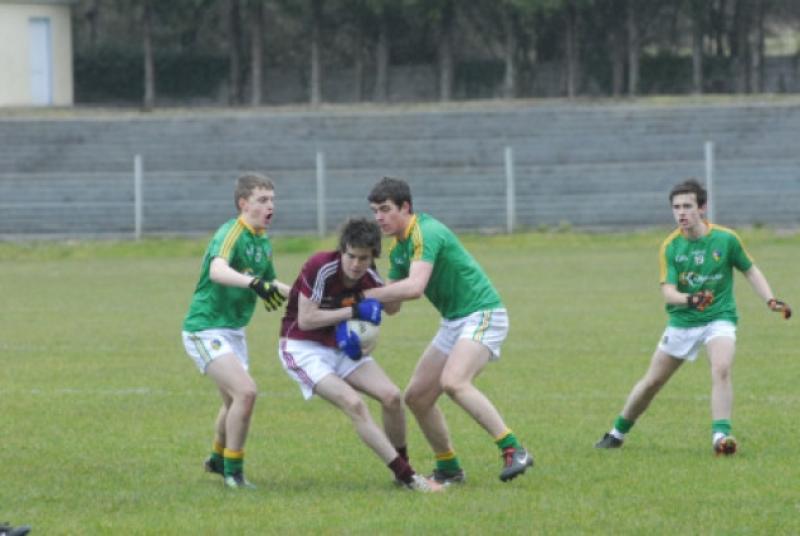 After Leitrim fought a spirited battled to grab a one point lead for a four minute spell in the second half, the already crowned Connacht Minor League champions Galway came back to defeat the home side by five points at the end in Páirc Seán MacDiarmada on Saturday.

After Leitrim fought a spirited battled to grab a one point lead for a four minute spell in the second half, the already crowned Connacht Minor League champions Galway came back to defeat the home side by five points at the end in Páirc Seán MacDiarmada on Saturday.

Galway slightly edged the first half proceeding and deservedly led by three points at the break but following the restart Leitrim outplayed Galway for the first 12 minutes of the action and it looked for a while like they might cause an upset.

After going behind, Galway manager John Donnellan brought on three subs, Eoin McCormack, Enda Tierney and Darren Moran and they turned the tide in the game with much of the remainder of the game being played in the Leitrim half.

Galway got their noses in front and went ahead again with a 46th minute Darren Moran free as Leitrim was held scoreless for the remainder of the half as Galway controlled the exchanges all over the field.

Galway raced ahead to build up a three point lead by the 17th minute after Jason Lyons, Paul Mannion and Branigan all shot over in turn. Leitrim, who hadn’t scored for 13 minutes, replied with a 19th minute Conor Gaffney point from play.

Over the next seven minutes, Galway’s Dylan Thornton and Leitrim’s Gaffney traded points and before halftime, Paul Mannion tapped over a free that put Galway into a 0-7 to 0-4 lead at the interval.

In the first minute after the restart a resurgent Leitrim reduced the deficit when Conor Gaffney tapped over a placed ball. Galway had a let off two minutes later when Kenny Cox failed to convert a goal chance from close range. Michael Daly opened Galway’s second half account when he shot over in the 38th minute.

But the Leitrim fight back continued with a fine piece of individual play from Kenny Cox who got on the end of a long ball in and inside his marker Cathal Reilly to give Galway keeper James Healy no chance when finishing to the net.

Within the space of a minute, Leitrim went front for the first time and only time in the contest when Cathal Keegan shot over a fine long range point which unfortunately proved to be the home side’s last score of the day.

Galway, who made a number of telling substitutions around this time and just went behind Leitrim for four minutes, was back on par when Michael Daly levelled the game with a 43rd minute point from play.

Following that Galway regained a lead they never subsequently relinquished when sub Darren Moran put over a 46th minute free. Galway went on to add two more unanswered points from Paul Mannion with subs Enda Tierney and Darren Moran getting a point each.