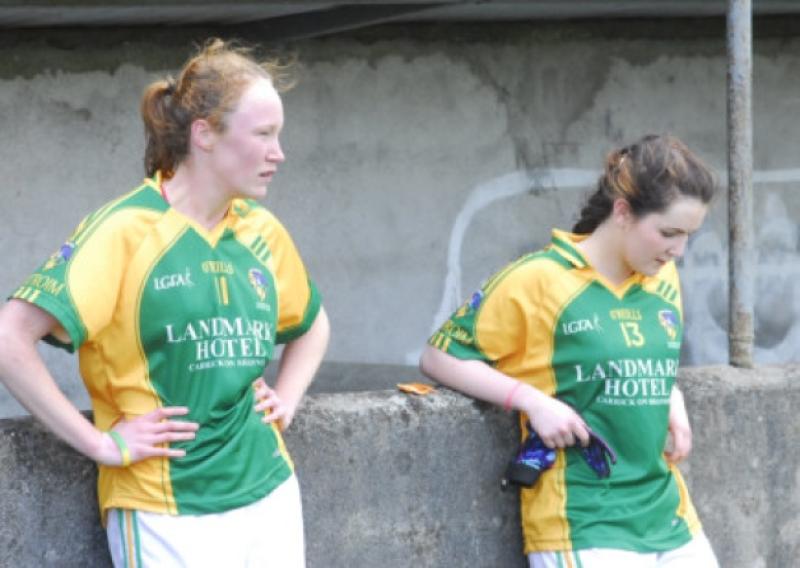 Leitrim’s interest in this year’s Tesco Homegrown Division 3 came to an abrupt end in Clara on Sunday last when they were defeated by a solitary point by Tipperary in the play-off to determine who would advance to a semi-final with Armagh.

Leitrim’s interest in this year’s Tesco Homegrown Division 3 came to an abrupt end in Clara on Sunday last when they were defeated by a solitary point by Tipperary in the play-off to determine who would advance to a semi-final with Armagh.

The defeat came in the most cruel manner possible as Edel Hanley converted a free five minutes into injury time as the Leitrim supporters would still have been celebrating Aine Tighe’s equalising third goal of the game as extra-time seemed inevitable.

Ultimately there was to be a dramatic twist as Tipperary showed great composure to go back down the pitch and having capitalised on some slack Leitrim defending they were awarded a free which Hanley calmly converted. While the manner of the defeat may have been tough to take, as Leitrim manager Gerry Ballantine acknowledged after the game Tipperary were worthy winners.

Looking for where it went wrong for Leitrim, against a side they had beaten earlier in the league, a significant problem was the failure to build a commanding lead in the opening half when playing with a very strong breeze.

An early Aine Tighe free helped settle the nerves and the lead was doubled when Roisin Curneen and Anna Conlan combined to set up Roisin Fowley and her shot was tipped over the bar by Tipperary goalkeeper Jackie O’Gorman.

Despite that bright and encouraging start Leitrim were unable to put real daylight between the sides and Tipperary proved to be particularly resilient and got back on level terms when Jennifer Grant and Edel Hanly (free) pointed.

Importantly, Leitrim responded well to that setback and Aine Tighe was on hand to score a fine individual point and within a minute Roisin Fowley struck from a tight angle to re-establish Leitrim’s two point lead.

From the resulting kickout Erin Farrell claimed possession and quickly delivered a pass in behind the defence to the waiting Roisin Fowley.

Fowley’s showed seemed destined for the top corner of the Tipperary goal but it crashed back off the angle of post and crossbar. Fortunately for Leitrim Aine Tighe was on hand to force the ball across the line and all of a sudden Leitrim were looking to be in a strong position as their lead was now five points.

However, Leitrim were unable to build on that score and Tipperary came to the fore as the half progressed. In the closing five minutes of the half Tipperary scored three unanswered points but from a Leitrim point of view it could have been significantly worse as Mairead Morrissey blasted over the bar when she found herself with only Leitrim goalkeeper Michelle Guckian to beat.

An Edel Hanly free further reduced the deficit before Tipperary were presented with another sight of goal but on this occasion Michelle Guckian was on hand to make an excellent save to deny Orlagh Walsh. On the stroke of half-time Leitrim’s lead was reduced to just two points when Mairead Morrissey pointed after good work from Brid Condon meaning Leitrim led 1-4 to 0-5 at the interval.

Playing against an incredibly strong wind and with only a two point lead to protect meant Leitrim faced a huge challenge in the second half but to their credit it was a challenge the Leitrim players looked ready to face head on. The full-back line of Mairead Stenson, Enya McWeeney and Sharon Kerrigan were particularly busy during the second half and within three minutes of the restart Tipperary were back on level terms with two points from Edel Hanly (one free).

Aine Tighe did reply with a pointed free after a foul on Erin Farrell but Leitrim were finding it very difficult to build any momentum as Tipperary hit back with two points from midfielder Sheelagh Carew who was beginning to have a significant influence on proceedings.

While they may not have been seeing as much of the ball as they did in the opening half Leitrim were very disciplined in defence and were much more decisive in possession and were able to do enough to hang on to Tipperary’s coat tails. Roisin Fowley scored an excellent point with her back to goal after Deirde Ward did well to find the space and create the opportunity meaning once again there was nothing to separate the sides on the scoreboard.

When looking for areas in which they can improve Tipperary will know they should have been clinical in front of goal and they spurned another goal opportunity 13 minutes into the second half. Mairead Morrissey and Jennifer Grant linked up well to release Edel Hanly but she sent her shot over the Leitrim bar to the frustration of the management team who were patrolling the sideline. Another Hanly free moment later meant Tipperary had a two point lead with 15 minutes remaining.

The next score proved to be one of the best of the game as it was a real team goal. The move began with Michelle Guckian who combined with Enya McWeeney to bring the ball out of defence and when it was worked further up the field the Fowley sisters Sinead and Roisin helped find Aine Tighe who made no mistake from close range.

With five minutes remaining and Leitrim leading by the narrowest of margins Tipperary struck emphatically with what proved to be their only goal of the game. Hanly and Carew cleverly exchanged passes and released Jennifer Grant and this time there was no mistake as Grant drilled her shot low and hard past Guckian.

A further Edel Hanley point meant there were three points between the sides as the game entered injury time but Leitrim refused to throw in the towel and their persistence was rewarded when they were awarded a penalty four minutes into injury time after Aine Tighe was fouled. The Kiltubrid forward took responsibility for the penalty and after Jackie O’Gorman saved the initial effort Tighe scored the rebound to spark great celebrations on the sideline as attention began to turn towards extra-time.

However, Tipperary had not yet begun to focus on extra-time and immediately went on the attack after Leitrim failed to secure possession of the resulting kick out. A free was awarded, five minutes into injury time meaning that if Edel Hanley was successful with her effort Leitrim’s efforts would be in vain. Showing no signs of nerves Hanley effortlessly slotted the free between the uprights to bring Leitrim’s challenge to an abrupt end.