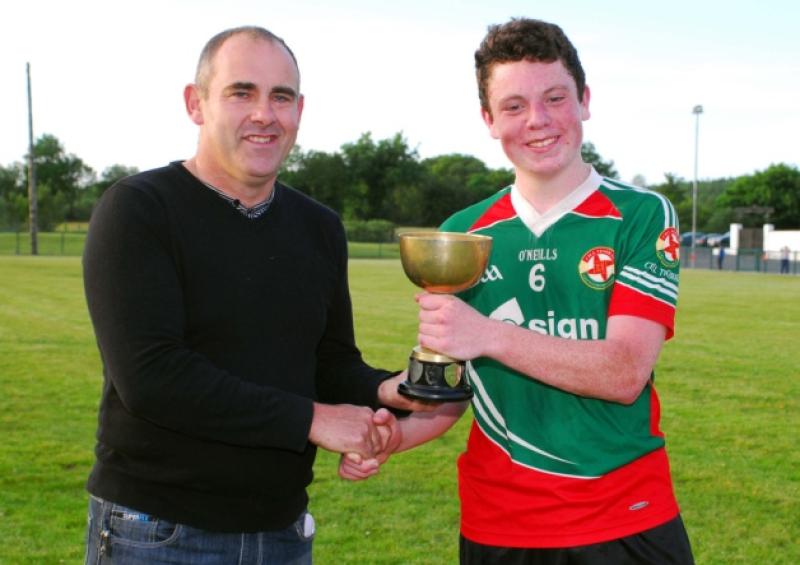 Kiltubrid produced a stunning comeback on Wednesday last as they overcame a seven point deficit to claim the U-16 13-a-side league title.

Kiltubrid produced a stunning comeback on Wednesday last as they overcame a seven point deficit to claim the U-16 13-a-side league title.

For much of the first half in Fenagh it was difficult to see how Garadice Gaels would be defeated as the more physical side looked in control. However, Kiltubrid produced an inspired second half to claim a deserved victory.

The second half dominance was in stark contrast to the opening half where Garadice Gaels bossed matters and they opened up a three point lead with successful frees from Pierce Dolan (two) and Dylan Mimna.

It got even better for Garadice who struck for the opening goal in the 8th minute as Dylan Mimna beat his marker before unleashing a shot past Declan Kelly and another Mimna free meant Kiltubrid already had a huge challenge on their hands.

With their first attack of note Kiltubrid were given hope as Niall Crossan proved to be the most alert player as he got a hand to a dangerous delivery and divertd the ball into the goal.

Over the next 10 minutes the teams exchanged points with Dylan Mimna and Pierce Dolan converting frees for Garadice Gaels while Stephen McLoughlin scored twice for Kiltubrid.

Two points in quick succession from Mimna and Michael Prior seemed to see the momentum return in the favour of Garadice but Kiltubrid were now a more confident side and with just a minute remaining in the half they struck again.

Whatever was said to the Kiltubrid players during the break certainly worked as they looked a new team after the break. Straight from the throw-in Patrick Meehan drove at the Garadice defence and then found Niall Crossan who goaled from close range. Garadice replied with a Pierce Dolan free but Kiltubrid were beginning to take control. Stephen McLoughlin’s free reduced the deficit to a solitary point and moments later they took the lead for the first time when Paddy Kelly found the net. It was to get even better for Kiltubrid eight minutes into the second half when Patrick Meehan burst through the middle before firing his shot past Yann LeGune.