Minors battle but Mayo too good 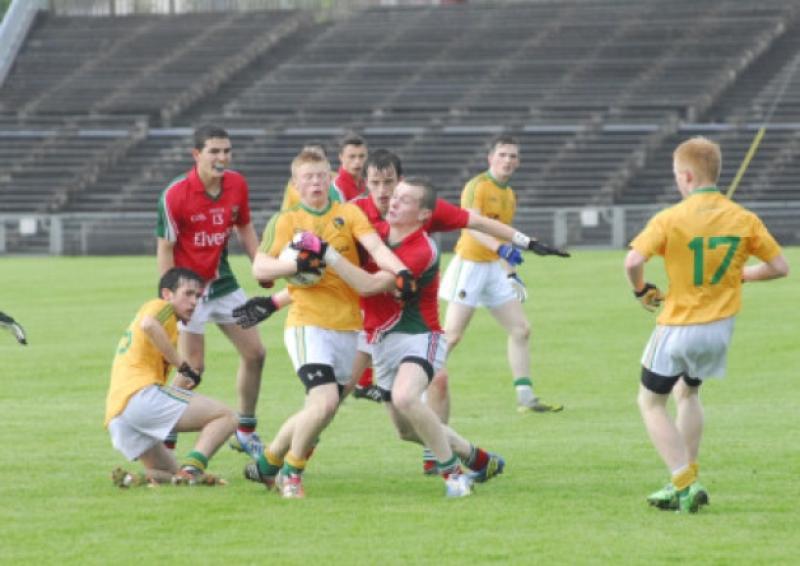 At the end it was a clear cut victory but favourites Mayo were made work extremely hard by a battling Leitrim last Saturday in McHale Park.

At the end it was a clear cut victory but favourites Mayo were made work extremely hard by a battling Leitrim last Saturday in McHale Park.

There is little solace in a ten point loss for Leitrim who have now gone 11 years without a win in the ESB Connacht Minor Championship but neither can you find fault with the commitment and application of a Leitrim team who ran themselves into the ground against an overwhelming Mayo.

As much as it might seem like speaking out of both sides of your mouth, Mayo’s winning margin was both fair to them and desperately unfair on a battling Leitrim!

Fair to Mayo because they dominated possession, camped for long periods in the Leitrim half, kicked a succession of wides and missed goal chances that had they been converted, the ten points winning margin could easily have been doubled.

Unfair to the visitors as it didn’t reflect just how difficult Leitrim made it for the home side, their intense work-rate, harrying, tackling and sheer commitment often driving Mayo into blind corners, rushing poor shots and panicking during the first half in particular.

It was only after halftime when Mayo hit three quick points that the home side started to really control the game and it was the section of the game that manager Enda Lyons pin-pointed after the game - “The ten minutes after halftime, Mayo took over around the middle third and got a run on us and got a few scores and we just couldn’t get back into it.

“Mayo are a very good side and I think they had ten of the squad that was in the All-Ireland Final last year and they’ll be there or there abouts this year. Just bitterly disappointed with the result and it didn’t happen for us.”

Mayo’s fortunate goal in the first five minutes was exactly what Leitrim didn’t need but Enda admitted the goal for the Green & Gold came with a slight bit of fortune as well - “It is a break, like everything else but we got a goal as well that possibly we didn’t deserve to get either.

“These breaks are in football and you just have to get on with it. To be fair, we dealt very well with it, we worked very hard against the wind in the first half and going in at halftime, we were very, very confident.

Enda also praised the fitness levels of his players - “Our fitness levels were very very good, the boys worked extremely hard all year and I don’t think if our levels of fitness weren’t were they are at, the result could have been a whole pile worse.

Disaster struck early for Leitrim as, after an early Cathal McCawley free, Tommy Conroy poked the ball home after a cross from Brian Walsh saw the Leitrim defender and keeper both slip on five minutes.

But if lady luck was against Leitrim at the beginning of the half, it was with them just before the break when McCawley’s long range free fell short, the ball broke loose and Conor Gaffney pulled on it, the ball ricocheting off a defender before ending in the net to leave Mayo 1-5 to 1-2 in front.

Mayo took control for the third quarter, hitting four unanswered points before another McCawley free narrowed the gap to six, Mayo replying instantly with a Michael Hall score. McCawley converted a free but Mayo replied with three in as many minutes.

McCawley did add one late free but Mayo were never seriously threatened as they ran out ten point winners.