No separating near neighbours after dramatic quarter final encounter 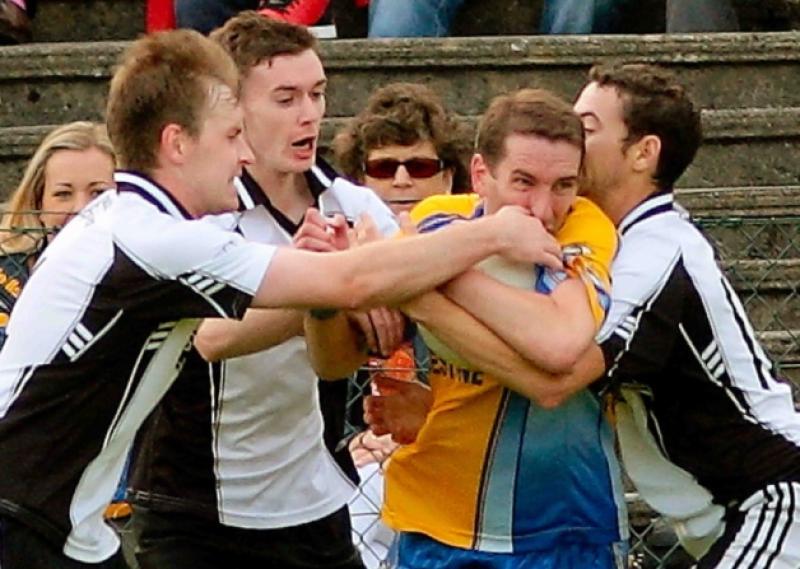 Near neighbours Glencar/Manorhamilton and Glenfarne/Kiltyclogher will have to meet again after a pulsating semi-final finished level.

Near neighbours Glencar/Manorhamilton and Glenfarne/Kiltyclogher will have to meet again after a pulsating semi-final finished level.

In a game that could have swung either way, both sides held the lead in injury time before Glencar/Manor goalkeeper Gary Hickey made the long walk forward to dispatch a free that ensured the sides will have to meet again.

The slow start to the game was in stark contrast to how the game finished as both sides gave everything in what was a pulsating finale.

Led by Aaron Hickey, James Rooney, Adrian O’Flynn and Conor Dolan, Glencar/Manor made a bright start and deservedly opened the lead after a slow start from both sides.

Aaron McDermott registered the game’s opening score and that was followed by an Aaron Hickey free.

One of the main men for Glenfarne/Kilty throughout the championship has been Fergal Clancy and he was again to the fore for his side last Saturday.

Clancy’s 11th minute free was his side’s first score but at this stage of the game it was Glencar/Manor who were providing the greater threat.

Dominic Kelly pointed after Conor Dolan’s effort hit the upright and midway through the half Dolan pounced for the a goal with his shot looping under Darragh Keaney’s crossbar.

That goal sparked a reaction from Glenfarne/Kilty but a series of wides meant the only addition to their tally was a Patrick Kilkenny point.

With six minutes of the half remaining some quick passing created an opportunity for Aaron Hickey who duly pointed.

Glenfarne/Kilty replied with a well worked point with John Sheerin doing very well bringing the ball out of defence before Daire Clancy pointed.

David Poniard pointed for Glencar/Manor to put five between the sides but the closing stages of the half belonged to Glenfarne/Kilty as points from Padraig Sweeney and Fergal Clancy (free) meant there was just a goal between the sides.

The second half began in the same manner the first finished and the deficit was further reduced following points from Fergal Clancy (free) and James Murray.

Substitute Alan Hickey made a telling contribution shortly after his arrival with a fine point but Glenfarne/Kilty were looking the sharper at this stage of the game. With less than 20 minutes remaining the deficit was reduced to a point when Fergal Clancy converted a free.

The final quarter saw Glencar/Manor up the intensity and they opened up a two point lead when Aaron Hickey pointed.

It wasn’t long before Glenfarne/Kilty came roaring back with points from Padraig Sweeney, Patrick Kilkenny and two from Fergal Clancy gave them a two point lead with just six minutes remaining.

A two point lead is often considered the most dangerous lead and Glencar/Manor showed just why as they struck for their second goal in the final minute. Conor Dolan floated the ball towards the Glenfarne/Kilty goalmouth and when it fell to Brendan Rooney the ball was dispatched for the second Glencar/Manor goal.

There was still time for plenty of twists and turns with Diarmuid Clancy’s wonderful score in the first minute of injury levelling matters.