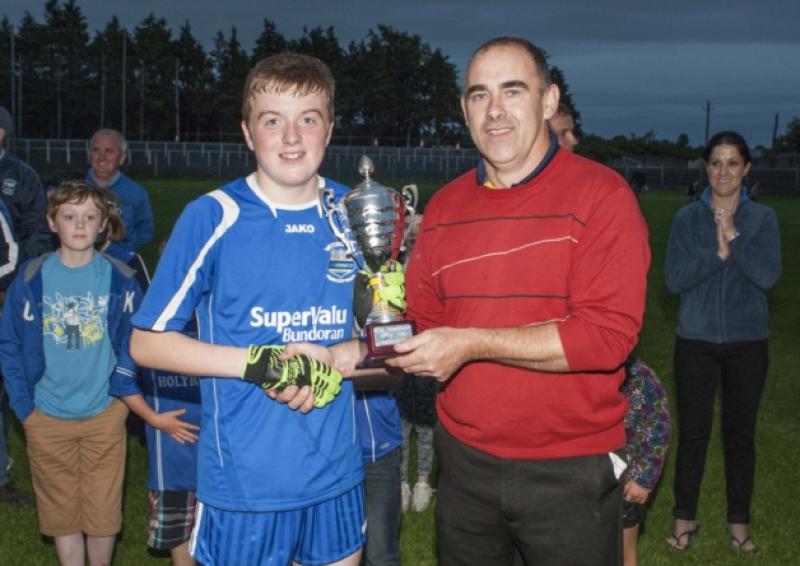 Last Monday night’s U-14 Championship Final proved to be a memorable with Melvin Gales doing just enough to emerge with a slender win.

Last Monday night’s U-14 Championship Final proved to be a memorable with Melvin Gales doing just enough to emerge with a slender win.

Both sides enjoyed periods of dominance, registered some excellent scores and contributed hugely to what was a thoroughly enjoyable game.

Understandably the intensity waned in the closing stages as the effect of playing on the big Pairc Sean MacDiarmada surface took its toll on the young legs.

The game burst into life right from the start with Killian McGloin scoring a fine individual goal barely 25 seconds after the throw-in to give Melvin Gaels an early lead.

Melvin Gaels found the net for the second time eight minutes in when Eanna O’Hara managed to get his pass away under pressure and Rhys Brennan applied a composed finish to the bottom corner.

After Caolan Clancy extended his side’s lead with an eight minute point, Marcus McGowan scored his first goal of the game when he floated a free into the top corner of the Allen Gaels goal.

Allen Gaels kept persevering and were rewarded when Caleb Duffy found the net for his side’s first goal although it is worth noting that Melvin Gaels’ goalkeeper Owen Gallagher made two excellent saves before he was beaten.

Allen Gaels were dealt a blow when Aaron McCauley was briefly forced off injured but in the minutes he was off the pitch, they held their own with both sides adding three points to their tallies.

With the first half action almost complete Allen Gaels were awarded a penalty when Aaron McCauley was fouled and Caleb Duffy duly dispatched the penalty to leave the score 3-4 to 2-5 in favour of the Kinlough side at the interval.

The second half began in the same exciting manner with Luke Tuite scoring a fine goal just eight seconds after the restart.

Points were exchanged between Killian McGloin and Caleb Duffy before Melvin Gaels struck for their fourth goal of the game. Again it was Marcus McGowan who tormented Allen Gaels as his free went straight into the goal.

However, Allen Gaels were not lacking in effort or skill and they came right back with a goal of their own. Danny McLoughlin’s perfectly weighted pass fell perfectly for Caleb Duffy who drilled his shot to the goal, via the post.

Leading by a point with time running out Allen Gaels had chances to extend their lead but saw a series of chances go wide.

Melvin Gaels capitalised on those misses as they finished strongly. Marcus McGowan scored his third and his side’s fifth goal when he hammered a shot in off the crossbar.

The scoring was completed when Caolan Clancy converted a late free to secure a dramatic victory after an absorbing game.