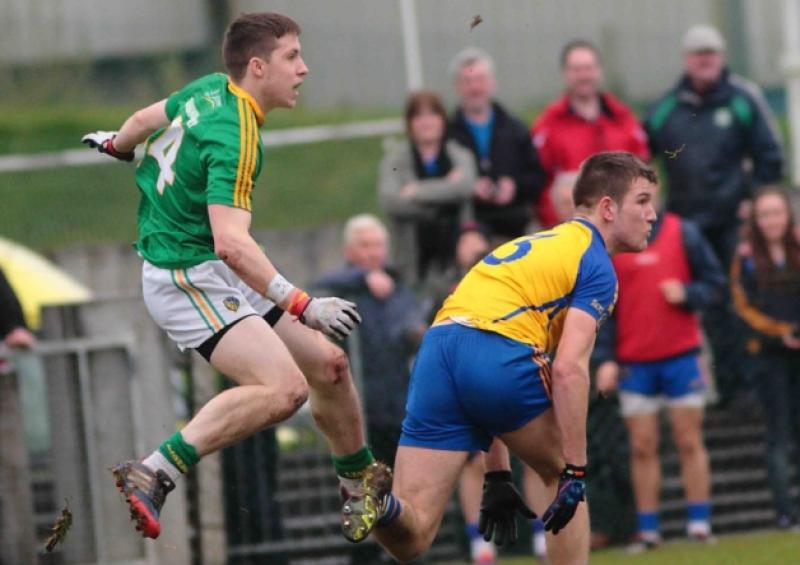 Leitrim’s dreams of Connacht U-21 glory were brought to an emphatic end this afternoon in Pairc Sean MacDiarmada.

Leitrim’s dreams of Connacht U-21 glory were brought to an emphatic end this afternoon in Pairc Sean MacDiarmada.

Having defeated Galway in the semi-final, hopes were high amongst the home supporters that a second upset could see Leitrim crowned U-21 champions. However, that was not to be the case as Roscommon were dominant from the first whistle to the last and only a stunning Alan McLoughlin goal kept Leitrim’s interest in the game alive beyond half-time.

It was a disappointing end to the campaign for the players, management and supporters but there was a positive note to be taken from the afternoon in Carrick-on-Shannon as the Leitrim minors continued their excellent start to the year by seeing off the challenge of Mayo in the day’s opening game.

Enda Smith proved to be Leitrim’s tormentor in chief but all over the pitch Roscommon were the stronger team and thoroughly deserved their victory.

When Donie Smith was issued with a seventh minute black card, having already scored two points, the hope was that Leitrim would benefit from Roscommon’s misfortune but ultimately that decision had no bearing on the final score as Roscommon seemed galvanised by the decision to penalise their corner forward and in particular Enda Smith, Donie’s brother, looked a man determined to take his frustrations out on the Leitrim defence.

The hard working, disciplined and full of energy display that saw Leitrim overcome Galway was something that would not only have to have been replicated but arguably bettered if Leitrim were to have any chance of defeating Roscommon was something that unfortunately never materialised.

No matter what Leitrim tried, they were unable to win sufficient primary possession in midfield or make life truly difficult for the Roscommon forwards and crucially when half chances did materialise the Leitrim forwards were unavailable to capitalise with the sort of accuracy that would have been needed to stand any kind of chance of victory.

The game began with Leitrim competing well in the middle and Niall Brady looking dangerous when the first ball was delivered in his direction. However, that attack came to nothing and Roscommon immediately launched their first attack of the game and they sent out a warning of what was to come as Mark Nally opened the game’s scoring.

Further points from Donie and Enda Smith extended the Roscommon lead and with the game just seven minutes old the signs were already ominous for Leitrim.

When Leitrim were awarded a free at the N4 end of Pairc Sean Mac Diarmada, Leitrim looked destined to open their account but before they could do that referee Shane Hehir from Galway went to the other end of the ground and after a moment of discussion issued Donie Smith with a black card, signalling that he was guilty of kicking out.

That setback didn’t seem to effect the Roscommon confidence or self-belief in the slightest and their response was emphatic. Points from Ciaran Kilcline and Enda Smith meant there was now six points between the sides after just 12 minutes.

It was beginning to look ominous for Leitrim but out of nowhere they found that moment of inspiration that threatened to reignite their challenge.

Alan McLoughlin seemed as though he would be content with slotting the ball over the bar when the ball fell to him but from the 30 yards he struck the ball with incredible power and his shot swerved and dipped beyond the reach of Colm Lavin’s despairing dive and just under the crossbar for a truly memorable goal.

Ultimately that score failed to signal the start of a comeback and Roscommon almost replied with a goal of their own. Mark Healy, Mark Nally and Enda Smith combined brilliantly to carve open the Leitrim defence and when the ball was played back to Healy his low shot was matched by an excellent save from Leitrim goalkeeper Brendan Flynn.

The resulting 45 was slotted between the posts before Leitrim replied with their final score of the half, a pointed Alan McLoughlin free.

At the other end of the pitch Roscommon had not yet completed their first scoring and further points arrived from Thomas Corcoran (free), Diarmuid Murtagh and Michael Gunning to give Roscommon a commanding 0-11 to 1-2 lead at the interval.

The second half began as the first had ended with Roscommon’s lead further extended when Diarmuid Murtagh converted two frees before man of the match Enda Smith pointed after a clever exchange of passes with Shane Kiloran.

The second half proved to be a largely forgettable experience from a Leitrim point of view with the only score the home side managed after the break arriving eight minutes after the restart when Niall Brady pointed from a free.

With Donal Wrynn now operating at full forward and Shane Quinn at midfield it was obvious Leitrim knew they needed goals and the best chance of that appeared to be if they could get the physically imposing Fenagh man to cause some problems for the largely untroubled Roscommon full back line.

That plan was completely understandable but the problem remained that Leitrim were finding it very difficult to win primary possession and when they did, the manner in which Roscommon were able to tackle in numbers meant Leitrim found it difficult to maintain possession for any length of time in dangerous areas of the pitch.

Further points from Conor Daly and Enda Smith further extended the gap between the sides as the Leitrim supporters came to the realisation that victory was now well and truly beyond them.

The effort the Leitrim players put into the game became apparent as the contest drew to a close with a number of them visibly looking drained after a contest that saw them work incredibly hard, despite what the scoreboard may indicate.

Roscommon continued to dominate as the game drew towards its inevitable end and completed the afternoon’s scoring with points from Mark Nally, Enda Smith and finally a Ciaran Kilcoyne free.

The pain of defeat will no doubt hurt the players who had dreams of Connacht glory but today’s defeat should not take away from the incredible victory they recorded in the semi-final. Added to the form shown by the county minors so far this year there is reason to be confident that Leitrim can be competitive at this level in the years to come.