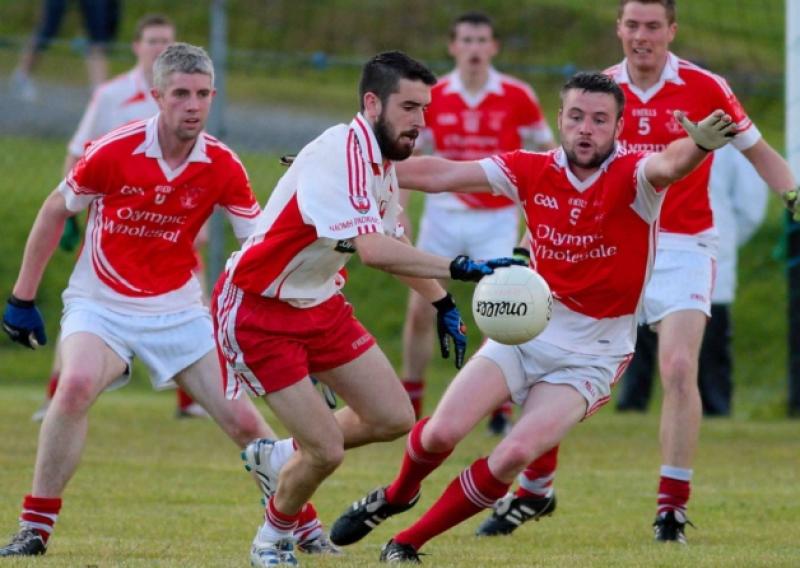 2013 Finalists Eslin were sensationally dumped out of the GWP Intermediate Championship on Saturday when Ballinaglera produced a superb second half display in Cloone to run out 11 point winners.

2013 Finalists Eslin were sensationally dumped out of the GWP Intermediate Championship on Saturday when Ballinaglera produced a superb second half display in Cloone to run out 11 point winners.

Eslin’s loss removes one of the favourites for the Intermediate title from the race as an impressive Ballinaglera underlined their own credentials with a dominating performance while Ballinamore Sean O’Heslin’s and St. Patrick’s Dromahair also booked their place in the competition’s semi-finals.

Eslin got off to a perfect start with a Conor Beirne goal after just 15 seconds but veteran Colm Maguire hit back two minutes later with a fisted goal in a first half dominated by Ballinaglera everywhere but on the scoreboard as Beirne also smashed a shot off the crossbar in the first half.

Eslin cut Ballinaglera’s lead back to just a point but with Conor Beirne missing two chances to draw level, Ballinaglera steadied their ship and a stream of points before Colm Maguire grabbed his second goal to seal a convincing and impressive victory.

Ballinamore Sean O’Heslin’s progressed to the semi-finals with a goal to spare as they overcame the challenge of Aughnasheelin, on a scoreline of 2-9 to 1-9 at a sun soaked Pairc Sean Mac Diarmada. Despite trailing Aughnasheelin for the majority of the opening half, Ballinamore levelled proceedings on the stroke of half-time as Wayne McKeon’s goal set the game at 1-4 each.

Peter Reynolds sent Colin Hannify’s troops into the lead a minute into injury time and from then on in, the yellow and blue never looked back. Liam Ferguson added another green flag to Ballinamore’s tally early in the second half before points from McKeon, Mark McGrory and Andrew Burns completed the scoring during a low key half hour of play.

Aughnasheelin for their part, could only manage five points during a disappointing second period for Aiden and Niall Rudden’s side and were unable to find the vital goal that would have evened the game.

St. Patrick’s Dromahair marched into the semi finals with a 2-13 to 1-6 win over Cloone in Drumshanbo but the win wasn’t as emphatic as the scoreline would suggest.

A Kevin Conlan goal inside two minutes gave Dromahair the perfect start but they struggled to truly build on that breakthrough. But for wayward shooting Clone could well have led at the interval but instead trailed 1-4 to 0-5.

With 11 minutes remaining Cloone capitalised on some poor defending and Damian O’Donnell was on hand to goal and reduce the Dromahair lead to just three points.

Cloone were unable to build on that score while Dromahair introduced Gary Fowley whose fresh legs terrorised the Cloone defence as Dromahair finished strongly to record a deserved win although not as comprehensive as the scoreline would suggest.