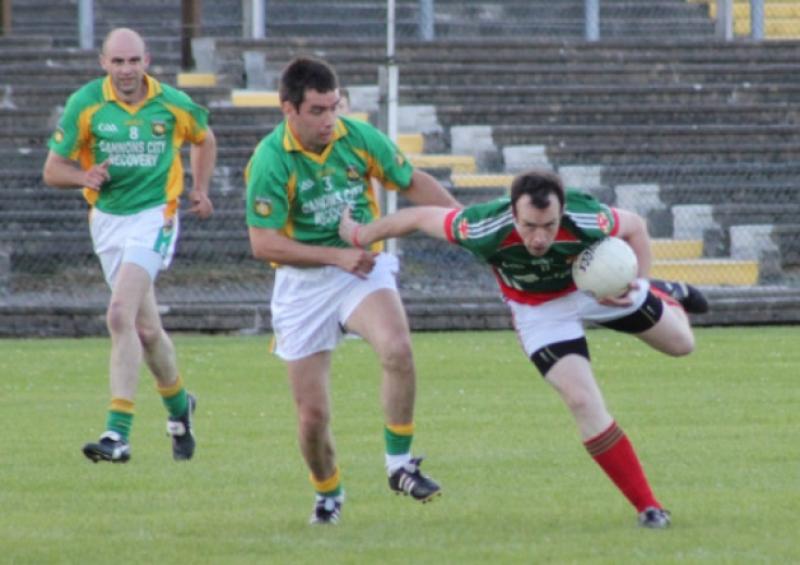 Champions St. Mary’s Kiltoghert survived a stern examination from Drumreilly while Allen Gaels over-turned a three point halftime deficit to defeat neighbours Kiltubrid in the other game on Saturday.

Aughawillan got off to a perfect start as they led 1-2 to no score after three minutes, the goal from the impressive Ciaran Gilheaney, but a James Campbell goal got Gortletteragh back into the contest as an open, exciting and high scoring first half saw a Cathal McCrann inspired Gortletteragh lead 1-9 to 1-8 at the break.

Gortletteragh still led when Colm Duffy was black carded before dissent saw him receove a straight red card from referee Brendan Sammon to reduce Gortletteragh to 14 players and Aughawillan took immediate advantage as they struck an immediate 1-4 to take control of the tie, Gary Plunkett finding the net.

Gortletteragh gave themselves some hope with a McCrann penalty but Aughawillan were never going to be caught as they finished with three unanswered points to book their place in the semi-finals.

In Pairc Sean Mac Diarmada, Allen Gaels’ wonderful second half performance saw them through to the Connacht Gold Semi Finals as they beat neighbours Kiltubrid by 2-9 to 1-6.

The game witnessed two opening half goals, one a piece from Allen Gaels’ Shane Walsh and a penalty from Kiltubrid’s Kealen McKeon mid-way through the half. Damian Eames’ side led this one by three points at the break as the teams went in a 1-5 to 1-2.

A strong second half showing from the Drumshanbo side saw them fight back to lead the game 2-6 to 1-6 with five minutes to go. Corner forward Nicholas Moore grabbing Gaels’ second goal mid-way through the second half. Late points from Alan Wynne, Brian Mulvey and substitute Thomas Mulvey confirmed Allen Gaels place in the last four with a 2-9 to 1-6 victory.

The second game of the evening in Shane McGettigan Park, Drumshanbo saw St Mary’s Kiltoghert book their place in the last four but they certainly didn’t have it all their own way against a spirited Drumreilly for whom Nigel Maguire and Conor Gaffney excelled.

Francis Holohan’s sixth minute goal for Drumreilly was unexpected but when St Marys replied with a goal of their own from a Ray Mulvey penalty two minutes later it appeared as though the defending champions were back on track.

However, it took a second goal, from long serving veteran Brian O’Donnell, 13 minutes before the break to ensure there was nothing between the sides at halftime.

The spirited and battling efforts of the Drumreilly players fell just short as St Mary’s upped their performance and crucially they were able to introduce experienced and fresh legs from the bench at crucial times to ensure the dream of back to back titles is still alive.