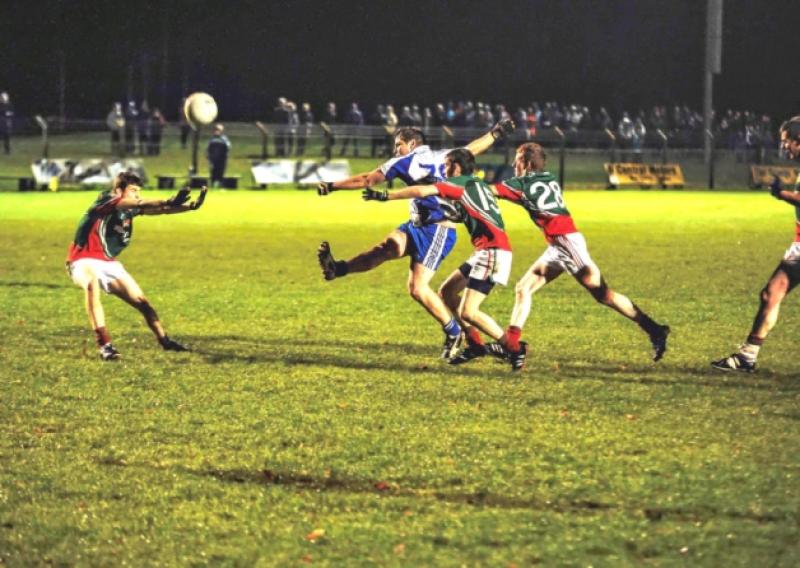 Just a year after losing this final, St. Mary’s Kiltoghert made no mistake at the second time of asking as they proved too strong for Kiltubrid in the Junior A Final in Cloone.

Just a year after losing this final, St. Mary’s Kiltoghert made no mistake at the second time of asking as they proved too strong for Kiltubrid in the Junior A Final in Cloone.

The Pyramid Bookmakers sponsored Championship Final was the last adult competition of the year and St. Mary’s, defeated by Mohill in the 2013 decider, ensured there would be no repeat with a dominant display.

Kiltubrid weren’t able to match the all-round strength of the Carrick men who, incredibly were missing five starters from the semi-final victory over Dromahair, but it didn’t show with Man of the Match Colm McWeeney giving Mary’s an unassailable platform in the middle of the park.

With Francis Molloy, Dermot Turley and Fergal Reynolds on top in defence and an attack with Damien Butler, Niall Comerton and Daire Farrell a handful in attack and James McGrail, McWeeney and Michael Corrigan controlling the middle, Kiltubrid just weren’t able to truly challenge their neighbours, despite their best efforts.

Kiltubrid were first on the scoreboard when Noel Gill scored a free from the right corner but a nice Daire Farrell point a minute later levelled the scores. Kiltubrid missed three good chances before Michael Corrigan curled a good effort over the bar to take the lead on eight minutes.

A block on a Farrell shot led to Niall Comerton firing over before Michael Greene finished off a patient move with a fine score on 14 minutes, Comerton seeing a dipping shot tipped over the bar to extend the lead to four points.

Damien Butler and Gill swapped frees as St. Mary’s were pressing, Brian Crowe curling over a shot that the umpire initially ruled wide while Paddy Whitlow had a poor miss from a free in front of the posts, leaving St. Mary’s 0-7 to 0-2 ahead at the break.

Kiltubrid needed the good start in the second half but three points in the first three minutes from Comerton, the second a huge effort from the corner, and a James McGrail fifty saw Mary’s eight clear before Gill tapped over his third free.

Kiltubrid needed firepower and moved keeper Gill out the field but despite a yellow and a black card for Niall Comerton in the one incident, meaning he could not be replaced, Damien Butler put over a free to extend the lead.

Kiltubrid hopes were hit when Gill was black carded with Butler putting over two more frees to extend the St. Mary’s lead to ten points.

Ronan Kennedy hit back with a great individual effort, dodging through a few defenders to score but as the game ground to it’s inevitable conclusion, Kiltubrid added two late points from McKiernan and Karol Scollan to complete the scoring.