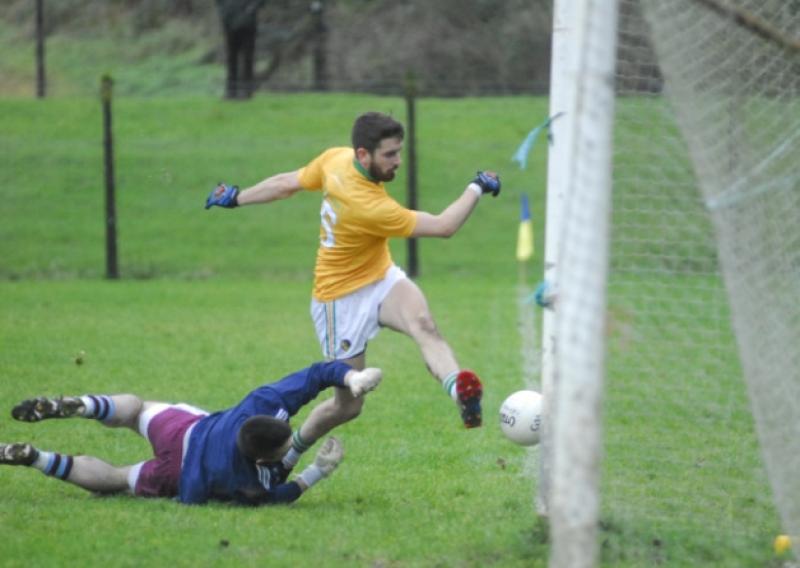 It is hard - no, near impossible - to pick holes in Leitrim’s comprehensive demolition of Galway Mayo Institute of Technology last Sunday in the first round of the FBD Insurance Connacht League.

It is hard - no, near impossible - to pick holes in Leitrim’s comprehensive demolition of Galway Mayo Institute of Technology last Sunday in the first round of the FBD Insurance Connacht League.

The defending champions gave an encouraging exhibition of long range point scoring in Cloone in their first competitive encounter of the 2015 season to open Shane Ward’s reign with a positive victory.

Scoring 3-17 is not something that Leitrim teams are renowned for, with all but five of the points coming from play, but the ease and style with which the home side found the posts is very encouraging for future outings.

But what was probably more encouraging was the structure and obvious fitness of the Leitrim players and it was blindingly obvious that a lot of work has been done on the training field over the past two months, not just on the fitness levels but also in game-plans and structures.

It was expected that Leitrim would deploy a more defensive system with Daniel Beck, Shane Quinn and Kevin Conlan dropping back to augment a defence that always had bodies available to close down space and clutter up the attacking lanes.

It meant a more precise mode of attacking, hand-passing back and forth across the field before the ball was worked to a man in space and it definitely played to the strengths of an attack featuring Ciaran Gilheany, Fergal Clancy and Kevin Conlan.

James McGrail and the returned Paddy McGowan dominated in the middle of the park and McGrail also did well at full-forward while Niall Woods was another stand-out performer, the Gortletteragh man’s energy, ball winning and intensity a notable highlight on the day.

There were plenty of positives but there is one big caveat and it is that Galway Mayo IT were extremely poor. The college team were badly off the pace and lacked any sort of cohesion to trouble a Leitrim side intent on doing the simple things well.

The victory is definitely welcome for Shane Ward as it will reinforce the positive vibes around the camp and build momentum and give the new manager’s message and methods the welcome seal of success.

But the Leitrim manager was among the first to recognise the paucity of the challenge posed by GMIT and apart from allowing the players to familiarise themselves with a new system, Ward will have learned little from Sunday’s encounter.

Yet the initial indications spoke of a tough test as two Andy Glennon points wiped out a point for Senior debutant Ciaran Gilheaney after just 30 seconds.

Niall Woods finished off a patient move that would become Leitrim’s trademark in the first half and after Christy McGowan fired the ball across the face of goal, Fergal Clancy showed nice awareness to pick his path through the defence to score.

Kevin Conlan added a free before Cian Donoghue finished off a good GMIT move with a pointbut Leitrim were finding their feet with Paddy McGowan lofting a 45 yard effort over the bar.

Conlan added a free, Gilheany scored after a clever passing move in from the corner and the game was virtually over on 17 minutes when Leitrim pounced for their first goal.

There seemed no danger as Kevin Conlan’s long range free drifted wide of the target but with keeper Conor Nolan attempting to let the ball go out of play, Ciaran Gilheany showed great opportunism to ghost in and fist the ball to the GMIT net.

Anthony Coyne replied with an excellent long range point a minute later but GMIT wouldn’t score for the remainder of the half while Leitrim would add another five points before the break.

Niall Woods grabbed his second of the game after Gary Reynolds’ effort hit the upright before a neat one-two with midfield colleague James McGrail also saw Paddy McGowan grab his second point of the day.

Kevin Conlan put over two frees before Gilheany set up Fergal Clancy for the last score of the half, leaving Leitrim 1-12 to 0-4 ahead.

Darragh Joyce opened the scoring for GMIT in the second half but Leitrim resumed their comfortable dominance with a fine Danny Beck point after a one-two with sub Cathal McCrann while Conlan added a free after earlier missing a goal opportunity.

The goals did arrive with two in the space of a minute, a high ball breaking nicely forKevin Conlan who drew the keeper before setting up former Dromahair team-mate Christy McGowan for a fisted goal.

Barely had those celebrations died down and the ball was in the net again, a high ball towards James McGrail breaking just right for an easy Kevin Conlan goal.

Conlan and McGrail both added points while GMIT had their best spell of the half with two points in the space of a minute while the students grabbed a consolation goal when Leitrim keeper Philip Farrelly spilled a harmless looking long ball and sub Alan Meeneghan dived in to force the ball to the net with six minutes to go.

The goal was nothing more than an irritant and Leitrim completed a professional performance with a good point from Fergal Clancy after McGrail went very close to grabbing a fourth goal.