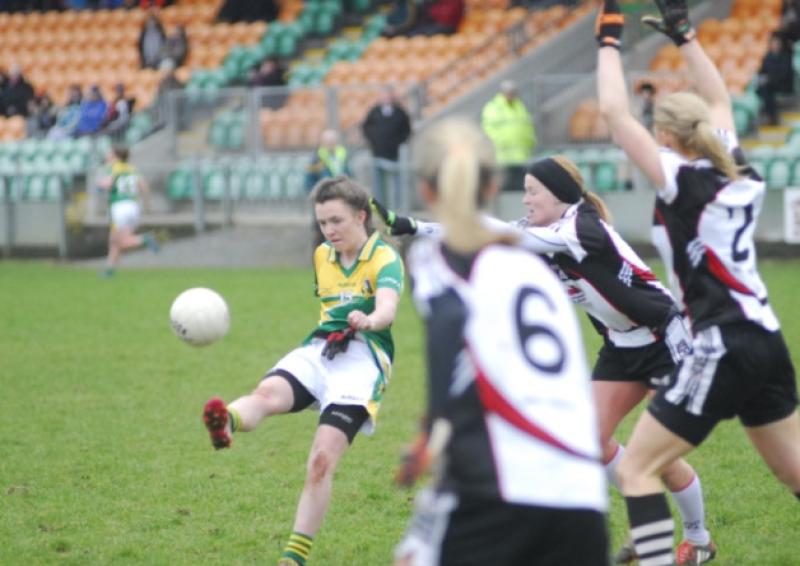 Leitrim’s unbean run in the Tesco Homegrown Ladies league came to an abrupt end when Sligo handed the Green & Gold a harsh lesson.

Leitrim’s unbean run in the Tesco Homegrown Ladies league came to an abrupt end when Sligo handed the Green & Gold a harsh lesson.

Leitrim went into Sunday’s encounter in Ballinamore flying high and full of confidence at the top of the table after four unbeaten games but once the visitors got into their rhythem, the Green & Gold were in for a tough afternoon.

With Sligo playing two extra defenders to guard against the threat of Aine Tighe, their job was made all that easier by the fact that the Kiltubrid sharpshooter was clearly injured, manager Pat Costello admitting that Tighe should not have started the game.

But once Sligo got a foot-hold on the game, they dominated as they closed down Leitrim’s young attack and then attacked with devastating efficiency as Emma Hansberry, Stephanie O’Reilly and Katie Walsh tore holes in the Leitrim rearguard.

So dominant were Sligo that their 1-8 to 0-1 halftime lead was fully justified and while Leitrim improved in the second half, they didn’t make any real headway until the last ten minutes when the visitors emptied their bench to give playing time to their bench.

The manner of the defeat will worry Leitrim most of all as they were unable to cope with Sligo’s defensive alignment nor with their intelligent play out of defence, the outnumbered Sligo forwards worringly able to find time and space with apparent ease.

The over-reliance on Aine Tighe was never more stark as without her physical presence, speed and strength in the full-forweard line, the Leitrim attack never got going with the same sort of fluency they have shown in their previous outings.

Despite the loss, Leitrim are still in pole position to reach the League semi-finals, both Sligo and Roscommon are three points behind and awin for Leitrim over a Wexford team yet to win a game will be enough to see them into the semi-finals.

Leitrim actually started the game with the first score when Ailbhe Clancy fired over from 30 yards in the first minute but Sligo gave an indication of what was to come when Katie Walsh scored a brilliant point with the outside of the boot from the right corner.

Walsh edged Sligo in front from a free before Leitrim keeper Michelle Guckian did well to deny the corner-forward a goal on seven minutes. Emma Hansberry then added a long range point as Sligo led by two after ten minutes.

Elaine O’Reilly, Stephanie O’Reilly and Hansberry all pointed and with Leitrim’s shooting poor when they did manage to get a shot in, Sligo took advantage with the game’s only goal after 22 minutes when there was a block on a Sligo shot.

With the ball rebounding, Laura Ann Laffey and Stephanie O’Reilly combined to put Walsh clear through on goal and she made no mistake with an easy finish, a score magnified when Hansberry finished off another good run with her third point of the half.

Aileen Maguire saw a free go badly wide and Michelle Heslin dropped a shot into the keeper before Stephanie O’Reilly thumped a massive effort over the Leitrim bar to leave Sligo 1-8 to 0-1 ahead at the halftime break.

Sligo hit back straight away with a Sarah Reynolds point before Emma Guckian floated a 30 yard shot over the bar.

Leitrim had a real let-off when Stephanie O’Reilly was going through but snatched at a shot but Leitrim’s hopes did take a real blow when Guckian received a yellow card and ten minutes in the sin-bin when she and fellow sub Niamh Tighe heavily challenged Sligo keeper Noelle Gormley as she came out with the ball.

With Sligo content to play a holding game, there was no score for ten minutes although Gormley made a good save from Carla Le Guen while Sligo sub Lisa Casey saw a shot come off the crossbar before O’Reilly sent the ball over the bar.

Hansberry saw another shot come off the crossbar while Sarah McLoughlin scored from 30 yards and Gormley made another good save to deny Le Guen a goal.

Sligo sub Denise McGrath fisted the ball over the bar for their last score with less than three minutes to go but with Sligo empting their bench, Leitrim managed three late points from Aileen Maguire but never got near the goal they needed.