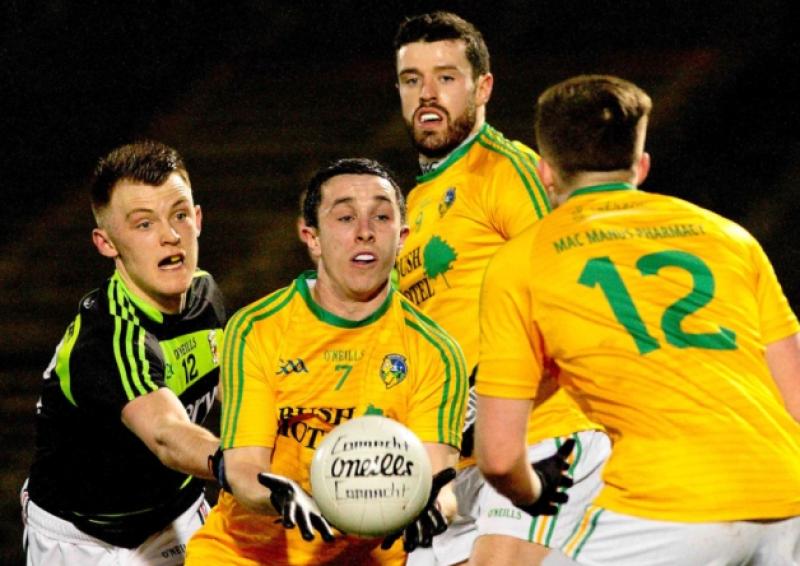 You couldn’t fault the effort of the players in Green & Gold last Wednesday but neither could you doubt that a well drilled Mayo were well worth their Connacht U21 victory over Leitrim.

You couldn’t fault the effort of the players in Green & Gold last Wednesday but neither could you doubt that a well drilled Mayo were well worth their Connacht U21 victory over Leitrim.

McHale Park’s floodlights featured two teams who delivered the new style of gaelic football with 13 players back behind the ball and defensive strategies taking precedence over all out attacking style.

That style prevailed as Leitrim frustrated the 2013 All-Ireland Minor Champions as a hard working and fully commited Green & Gold team stymied the home team greatly in the first half.

Leitrim actually opened up a two point gap at the end of the first quarter but once corner-back Michael Hall broke through the ranks of the massed rearguard for the first of four Mayo goals, a young Leitrim side were always fighting an uphill battle.

Shane Ward’s team, featured five of last year’s Minor team, funnelled back in huge numbers during the first half and tried to hit on the break, doing the job quite well as Mayo’s dominance was not reflected on the scoreboard as they were forced into some wild kicking and dead-ends.

The disciplined Leitrim defence held firm under growing pressure but once Mayo found the net, you could see their confidence renewed and Leitrim were left chasing the game.

Halftime saw two points betwen the teams but Leitrim never regained their previous solidity, gaps suddenly appearing in the defence as Mayo finally showed their dominance on the scoreboard and perhaps the pace telling on the Leitrim players

The second Mayo goal finished the game, coming as it did with the body blow of losing Gary Butler to injury as the game was held up for 23 minutes while a prone Leitim full-back waited for an ambulance.

With Leitrim’s concentration well and truly shattered, Mayo quickly added a third goal once the game resumed while Leitrim showed a great deal of spirit in the closing stages to grab a few late points but there was no doubt that Mayo were the better side on the night.

Ten first half wides to four for Leitrim paint an accurate picture of their dominance as Leitrim fought incredibly well to live off scraps in the middle of the park.

The loss of Donal Wyrnn to a black card early in the second half was another blow a game Leitrim simply couldn’t counter as Mayo’s strength in depth became ever more evident as teh game went on.

Leitrim’s performance was built on team-work but you have to commend Daire Farrell, Nicholas Moore, James Mitchell, Gary Plunkett and Conor Gaffney who worked extremely hard against a very good Mayo side.

Leitrim got off to a great start with Conor Gaffney collecting a long ball, turning sharply before striking a lovely point in the first minute. Five minutes later, a patient passing movement ended with Donal Wrynn thumping the ball from all of 55 yards over the bar.

But despite Leitrim’s first two scores, Mayo set the tone for the first half as they dominated only to miss three chances before James Durcan opened their account.

Eight minutes in, Oisin Madden did well to block a shot from T.J. Byrne to prevent a goal but Mayo drew level after keeper Brendan Flynn conceded a fifty and his opposite number Matthew Flanagan put the ball between the posts.

Leitrim’s massed defensive efforts frustrated Mayo with three poor wides as the Green & Gold made the most of every opportunity, Gaffney converting two frees in the space of a minute, one moved in for dissent.

But the crucial turning point arrived on 18 minutes - James Durcan’s quick sideline ball found T.J. Byrne down the right wing, an area where Mayo were making huge progress. James Mitchell stepped up to tackle Byrne but a quick off-load released Michael Hall into space and the Mayo man sped through to fire a great shot into the far left corner of the net.

The goal infused Mayo with confidence and although Leitrim responded when Gary Plunkett blasted over from 20 yards,Mayo hit back with two points in a minute from Stephen Coen & Darren McHale.

That left the game well poised at 1-4 to 0-5 at the break but Mayo made an immediate impression on the second half with corner-back Hall adding a point to his goal after just two minutes.

Gaffney and Flanagan swapped points from placed balls either side of a block on Mayo sub Conor Loftus who looked set to goal but it was the next score that ended the contest. Mayo broke through the Leitrim rearguard with the ball going towards an unmarked Michael Hall.

Gary Butler and keeper Brendan Flynn moved to intercept with the three colliding heavily, the ball falling to Diarmuid O’Connor for an easy tap-in to an empty net.

Leitrim tried to respond with Matthew Flanagan showing his net-minding rather than place kicking skills when he saved a chip shot from sub Niall Brady.

Mark Plunkett added a fine point but Mayo were running through at their ease, Adam Gallagher blasting home a goal before Nicholas Moore finished off the scoring with an excellent point with three minutes to go.