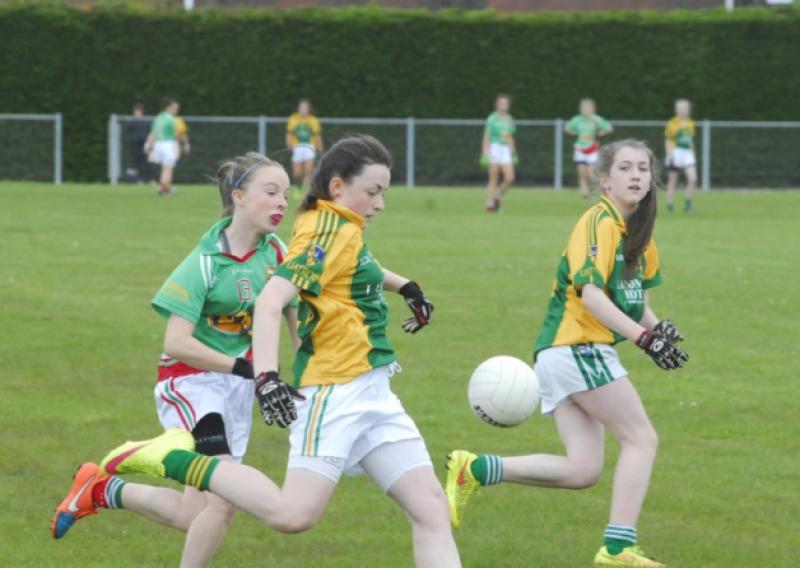 A chastening afternoon for the Leitrim Ladies U14 team who were handed an horrible hammering for a very impressive Mayo in Ballinlough.

A chastening afternoon for the Leitrim Ladies U14 team who were handed an horrible hammering for a very impressive Mayo in Ballinlough.

Connacht Ladies U14 B Championship

Given the final scoreline, it is hard to believe that there was just five points between these teams in the group stages encounter but absent key players in key positions, Leitrim were fighting an uphill battle against a powerful and frankly impressive Mayo.

Officials may have privately felt an understrength Leitrim were going to struggle against Mayo last Sunday but the scale of the defeat will have come as quite a shock given that young Green & Gold Ladies had really put it up to Mayo in the first round robin game.

But from the first few minutes, it was very evident that Mayo were intent on ending this one early - Leitrim rarely got the ball past the middle of the field and when they did, a very impressive Mayo backline snuffed out any threat posed with their half-back line particularly impressive.

With each and every one of the Mayo forwards a match winner by themselves, the Leitrim defence found themselves under immense pressure and not even the best efforts of the outstanding Sarah Doyle and Hannah Bird could stem the tide.

Incredibly, Leitrim may still yet have an All-Ireland to play in as, bizarrely, Mayo are not allowed to contest the B grade due to their standing nationally in the game. Roscommon, who lost the A Final to Galway by 12 points last Sunday, could be nominated to play in that competition.

That all means that Leitrim could still yet be involved in a playoff with Sligo to decide which teams goes into the All-Ireland C series. In the Group stages, Leitrim had just a point to spare over the Yeatswomen as they won 5-6 to 3-11.

With an equally convoluted system at Senior level, Connacht Ladies could do with examining the structures to best promote the game in all counties.

It is rare that Mayo contest a B Final in Connacht and they made sure they would win it with a blistering 2-10 in the first quarter! It was Leitrim who opened the scoring when Roisin McGreneghan pointed a free after just a minute and initally, it looked as if Mayo might struggle.

But once Grainne O’Neill put over a well worked point, Mayo set the tone for a blistering opening quarter, camping in the Leitrim half and winning virtually every ball that went into the middle of the field and attacking in waves.

Points flowed from Aoife Carrabine, Emma Honnan, Aoife O’Neill and Ciara Nedham but the first goal came with a slice of luck when a long shot caught out keeper Rachel McGirl and ended up in the back of the net on 12 minutes.

The goal only seemed to spur Mayo and they quickly added four points before Emma Honnan drove an easy shot to the back of the net on 14 minutes, the scores coming at the rate of almost two a minute at this stage.

Keeper McGirl did well to keep out a shot that almost bounced into the net but suffered a blow to her arm and had to be replaced by sub keeper Alva Sheridan who did a good job in difficult circumstances.

The impressive Muireann Devaney added a point and Roisin McGreneghan got a second free after a block on her shot but Mayo hit back with a Ciara Nedham point and a goal from her twin Tara who gathered a rebound from her sister’s shot to find the back of the net.

Grainne O’Neill added two points and Nedham another with McGreneghan firing over another free to leave the halftime score at a staggering 3-14 to 0-4 at the break, although the battling Lisa Cull did go close with a goal chance.

After a point from Grainne O’Neill, Leitrim gave themselves a huge boost with a brilliant Muireann Devaney goal after a great solo run after just two minutes. Incredibly, Mayo hit back with two goals in the space of a minute, the first from Tara Nedham after she fielded a high ball, turned and drilled the ball to the net.

The second came when Aoife O’Neill’s high shot went over the keeper in the net with Ciara Nedham adding two points shortly after.

Leitrim’s last score came on 12 minutes through a Roisin McGreneghan fire after Alva Sheridan made a good save to deny Mayo another goal.

Mayo would go on to add another 1-6 before the final whistle, the goal coming from Yasmin Donnelly but a battling Leitrim refused to lie down and twice Leah Fox saw goal-bound efforts saved by the Mayo keeper.

Leitrim did not get any reward from their late attacking efforts asMayo held on for a very comfortable victory.