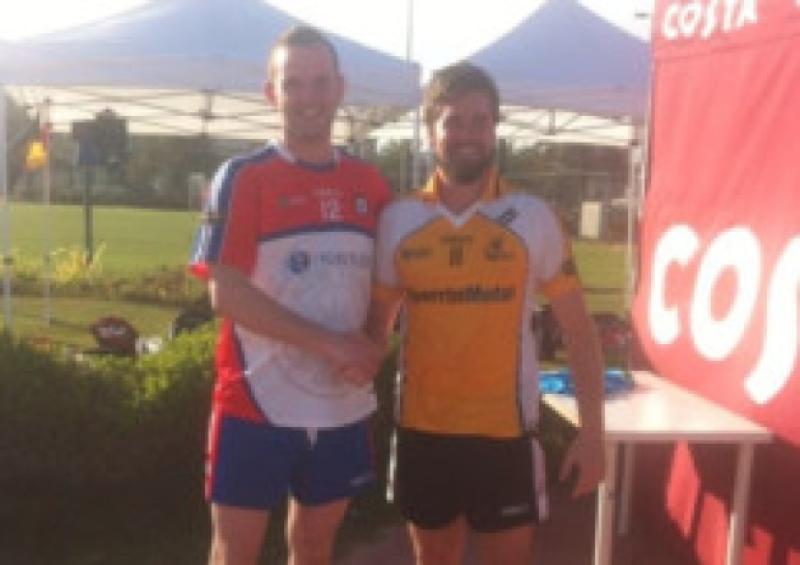 It’s a long way from Dromahair to Abu Dhabi, but two of St Pat’s finest exponents of Gaelic Football found themselves in opposite corners at the weekend in Abu Dhabi as Middle East’s Shane Fowley and New York’s Sean Kelly faced off at the first ever GAA World Games.

It’s a long way from Dromahair to Abu Dhabi, but two of St Pat’s finest exponents of Gaelic Football found themselves in opposite corners at the weekend in Abu Dhabi as Middle East’s Shane Fowley and New York’s Sean Kelly faced off at the first ever GAA World Games.

Twenty-six teams, over 300 players and thousands of supports gathered at Zayed Sports City for the event, which drew teams from all continents bar Antarctica to a balmy 30 degrees in the heart of the United Arab Emirates.

Little did Fowley and Kelly think, when they attended secondary school together at Coola VEC, along with pulling on the St Pat’s jersey since Under 10, that they both would end up in opposing camps on a GAA field in the Middle East.

“Myself and Sean played together since Under 12. I was a year ahead of him in school, but we were the same age so we played all the way up to Minor together at midfield,” Fowley said.

Fowley had the upper hand in the semi-final, as Middle East 1 coasted to a 12-13 to 2-6 win over a Kelly captained New York outfit.

The 27-year old scored Middle East’s second goal, and added two points, but played a deep defensive role for the bulk of this game.

His goal helped Middle East to an early 2-2 to 0-0 lead, and although New York responded with 1-1, the ball reigned in on top of the New York defence with a lobbed goal, and from there to the finish Middle East took firm control.

“We fairly went to town on them with 12 goals. I think the boys just wanted to get in the shooting practice for the final, because we wanted goals in the final.

“New York were obviously better than they showed in that game, but we were confident playing them.”

The Middle East 1 team went on to the final, where they faced their counterparts from Middle East 2.

The losers included Wexford’s Aindreas Doyle as well as former Kerry Under 21 Cian Tobin, who starred in the decider, hitting 1-7.

However, a goal from Galway’s Darren Kelly’s turned the game in ME 2’s favour, helping to level the tie, before they kicked on with Laoisman Conor Smith bagging a fourth goal with the last play of the game to seal a 4-13 to 1-16 win.

While there were plenty of Irish on view, the competition had a truly international feel with both mens and womens competitions involving teams of non-Irish from the Middle East, Asia, Canada, South Africa, Galicia and Argentina.

Fowley says they were a joy to watch.

“I thought the standard was very good actually in both the men’s and women’s International competitions,” he said.

“I watched the Galicia-Argentina final and they had mastered the basics easily considering that they aren’t playing too long.

“The South Africa girls were also a joy to watch combining the soccer skills with the GAA basics.”