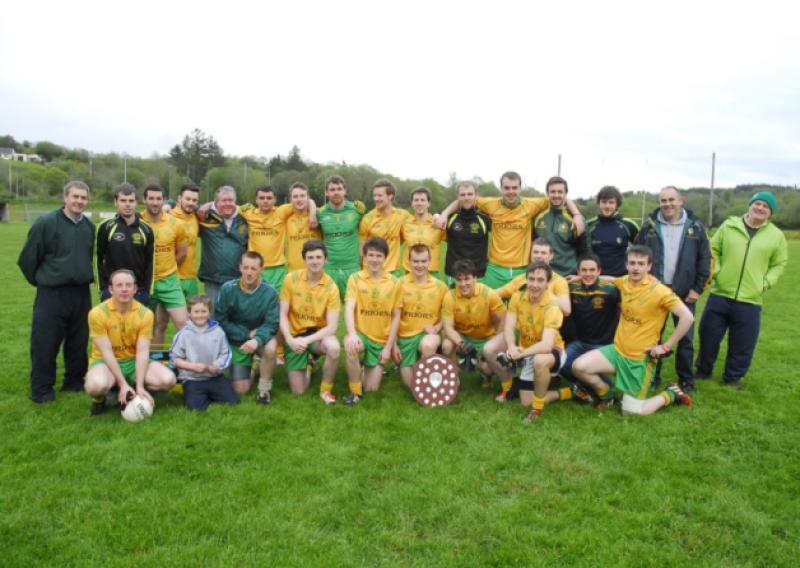 Sean O’Heslin’s greater efficiency and bad misses from Glenfarne/Kiltyclogher saw the Ballinamore men grab the first silverware of 2015 when they claimed the Shield title.

Sean O’Heslin’s greater efficiency and bad misses from Glenfarne/Kiltyclogher saw the Ballinamore men grab the first silverware of 2015 when they claimed the Shield title.

Ballinamore showed a better instinct for landing their scores and even had the good fortune of a lucky goal as an understrength O’Heslin’s held off a determined but wasteful Glenfarne/Kiltyclogher.

Glenfarne/Kilty began in great form but could not convert it into scores, Philip Farrelly making a great save from Diarmuid Clancy. A couple of more misses came before Clancy thumped a fifty over. Those misses proved costly when Brian Leyden took off on a run and drilled a great shot to the net, Wayne McKeon adding a free two minutes later.

Clancy hit a second point, a great effort from inside the 14 yard line and right beside the sideline but with points from Conor Moran and sub James McWeeney, O’Heslin’s continued to show greater efficiency.

Glenfarne got themselves back into the game seconds after Diarmuid Clancy hit the base of the post with a fine shot but Darren Murray did extremely well to gain possession, beat his man and the drill the ball to the net.

But it was Ballinamore who gained momentum with McKeon, Paddy Connaughton and David Duignan all firing over points to leave them 1-6 to 1-2 in front at the break, a push O’Heslin’s maintained with the first three points of the second half.

Wayne McKeon added a free and then a fantastic effort from the corner while Kevin Mullen arched over a lovely point on seven minutes.

The game was back in the melting pot on nine minutes when Paddy Kilkenny soloed through the heart of the Ballinamore defence and sent keeper Farrelly the wrong way for a lovely goal.

Inspired by the goal, Glenfarne/Kilty added three points in a three minute spell from Clancy, Tommy McManus and Conor O’Rourke to leave just a point between the teams before inaccuracy cost the north Leitrim men with Ballinamore braking forward with Brian Beirne’s long range shot bouncing off the hands of keeper Niall McManus and into the roof of the net with less than five minutes to go.

And when Jack Cullen scored a great point with less than two minutes to go, that seemed to be it particularly as Glenfarne saw a Niall Clancy shot brilliantly saved by Farrelly deep into added time.

But from the fifty, the ball broke and there was a collision of bodies, referee Kevin Mallon awarding a penalty that Diarmuid Clancy put in the top right hand corner. Glenfarne kept coming and had what looked like a good claim for a foot-block turned down with Niall Clancy putting over a late point as Ballinamore held on.