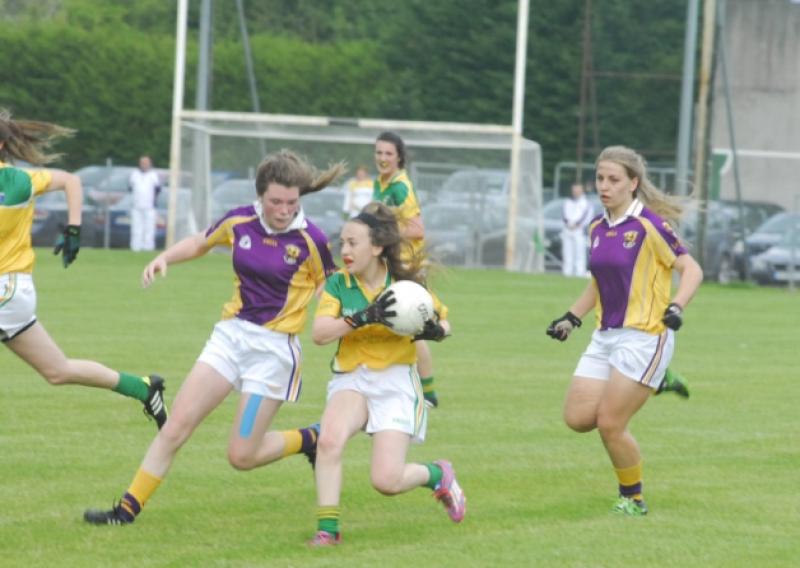 Leitrim fans travelled in big numbers and with plenty of hope to Clane last Wednesday but those dreams were shattered early by an impressive Wexford.

Leitrim fans travelled in big numbers and with plenty of hope to Clane last Wednesday but those dreams were shattered early by an impressive Wexford.

A Wexford goal just three minutes into the contest set the tone for Wednesday’s U16 C Final in the fantastic setting of Clane GAA Club and as hard as Leitrim fought and battled, there was no doubting that the Leinster women were the stronger side.

With a big turn-out of Leitrim fans, far, far bigger than what turned out in Castlebar for the Ladies Senior team’s Connacht Intermediate Final just a few weeks ago, the Green & Gold came up against a Wexford team who came through a ferociously tough Leinster championship that obviously stood to them in Clane.

Were it not for some brave and often times last gasp defending, Leitrim could have been in real bother against a Wexford team who possessed a very tight marking defence, a strong running midfield and three or four forwards who looked as if they had the potential to rip holes in the Leitrim rearguard.

That they didn’t fully do so was down to a stubbron and defiant defensive display - Aughawillan’s Eimhin Quinn was up against Player of the Match Emily Coakley but turned in a powerful display and was one of the few Leitrim players to catch the eye coming out of defence with the ball.

Full-back Mairead Flood stood firm and got good support from Aisling Quinn and Niamh McNiffe while in attack, Emma McGovern and Aine Flood were at the heart of everything Leitrim tried.

Perhaps that played into Wexford’s hands as they soon switched some of their best defenders onto Flood and McGovern and they were never able to play with the sort of freedom they needed to cause damage to the Wexford rearguard.

With such pressure on the Leitrim defence, players drifted deeper and deeper and it meant that when Leitrim did stage a breakout, there was no support up the field for players to find with clearances.

Leitrim started off brightly but saw an Aine Flood shot fall short but Wexford weren’t long in putting their stamp on the game, Cathy O’Connor and Kate Hendrick both charging through the middle to point in the first two minutes.

The dangerous Rachel Bennett forced a save from Leitrim keeper Kiera Masterson but Siobhan Doolan was on hand to force the rebound home from close range. Wexford looked as if they were run away but Leitrim dug in and and started to make a bit of headway in attack.

Aine Flood, always dangerous, put over a good point and a minute later, a cleverly worked short free saw the Allen Gaels player notch her second to cut the gap to a goal after 12 minutes.

Wexford were missing good chances and four times in the first half, they found a player in behind the Leitrim defence only to lose possession of the ball but they eventually extended the lead with a point from Emily Coakley.

Coakley, who went on to win the Player of the Match award, missed a couple of frees but then scored a great point under huge pressure on 22 minutes.

Wexford’s Teghan Furlong fired across the face of the Leitrim goal before Aine Flood had an uncharacteristic miss from a free.

Wexford then killed off any Leitrim hope when a huge free from defence went over the head of a defender and Coakley raced through the middle, running some 40 yards before blasting the ball to the Leitrim net with just over two minutes left in the half.

Seconds later, O’Connor swept over a point with Caoimhe Gaffney pointing for Leitrim on six minutes after a free rebounded off the post.

But again, Wexford struck for a goal, Coakley soloing in to fire home a second goal and put the game well beyond Leitrim’s reach after 10 minutes of the second half. Incredibly, the final 20 plus minutes of action was to feature just three more scores as the urgency left the game with both teams emptying their benches.

Coakley added two more points to end Wexford’s scoring with 15 minutes to go although they did have a few more chances, missing frees and hitting the woodwork.

Aine Flood saw a long range free held while the impressive Eimhin Quinn pushed up from centre-back to get the last score of the game with more than five minutes to go, her shot rising just over the bar as the Aughawillan player sought a consolation goal.

There was still time for more action at the other end with KieraMasterson doing well to rob a Wexford attacker as she bore down on goal in the final minutes.