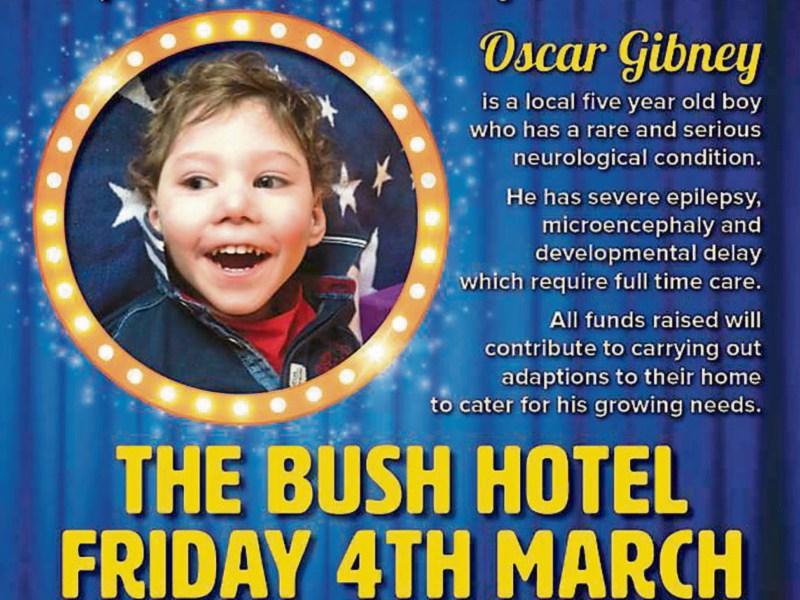 Five year old Oscar Gibney has a rare and serious neurological condition. He has severe epilepsy, microencephaly and development delay, all of which require full time care. He lives with his parents Denise McElhone and Brian Gibney and his two sisters in Attirory, Carrick-on-Shannon.

A special night of music and dancing has been planned and the evening will also include a fundraising auction.

The event is planned for The Bush Hotel, Carrick-on-Shannon on Friday, March 4 at 8pm.

All money raised will go towards completing essential adaptations on the Gibney home so that little Oscar's present and future needs can be properly met.

Brian Gibney is Oscar's main carer and this special fundraiser will help to provide the specific equipment needed to care for Oscar.

Tickets for this event are €15 on the door or you can purchase them from the following locations: Carrick-on-Shannon - Kieran's Chemist; Gartlan's Newsagents; Ging's Bar. Kilmore - Flynn's; The Kilmore Inn. Hillstreet - Earley's; Bracken's. Leitrim Village: McCormack's. Drumshanbo - McCormack's; Gibbons; Scollan's.