From Leitrim Village to Belturbet 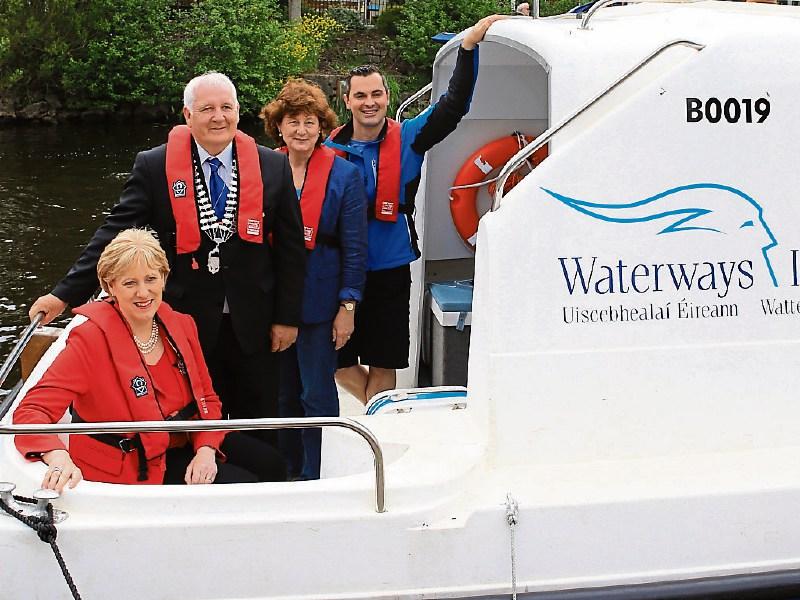 The Shannon–Erne Blueway running from Leitrim Village to Belturbet and including 70km of water trail and over 17km of linear and looped walking and cycling routes was officially launched last weekend.

The Blueway provides a range of recreational leisure activities such as paddling, walking and cycling all linked by the waterways to local towns and villages.

This is a new concept where a myriad of recreational activities have been developed and bundled together as a single or multiple visitor experience and tourism proposition.

Waterways Ireland has, using the wonderful waterway assets, also developed and built a paddling trail from Drumshanbo through Battlebridge and Leitrim Village to Carrick on Shannon.

The Shannon-Erne Blueway adds significantly to the network of Blueway trails that Waterways Ireland has developed along the navigations.

Minister Humphreys stated “This is a wonderful amenity which is a great addition to Cavan and Leitrim’s tourism offering. The development of Blueways across the country is an important element of the Government’s tourism strategy. Towns and villages along the Shannon-Erne route will now be able to capitalise on the increased level of visitors who will come to the region to use the Blueway for a range of recreation activities.

“More visitors will bring more revenue for local businesses and should boost local job creation. I would like to commend Waterways Ireland, the local authorities and the tourism agencies which have collaborated to bring this project to fruition.”

The Shannon-Erne Blueway has the potential to have a very positive impact on jobs and the regional economy.

With the market for off road adventure tourism growing here in Ireland and internationally, Cavan and Leitrim are in a prime position to benefit from this trend.

The launch of the Blueway will allow local businesses to capitalise on an increase in demand for transport, equipment hire, accommodation and entertainment.

“Cavan is blessed with a network of scenic waterways which can rival any in the country. We are delighted to link in with Waterways Ireland and Leitrim County Council to develop and promote the new Blueway linking the Shannon and Erne Rivers. The opportunities for recreational activities along the Blueway are many and we’re confident that visitors will want to experience all that it has to offer.”

The Shannon-Erne Blueway is being delivered by Waterways Ireland in partnership of the Cavan County Council, 'This is Cavan', Canoeing Ireland, Leitrim County Council, Leitrim Tourism and Fáilte Ireland.

Chief Executive Dawn Livingstone confirmed that partnership was the key to delivering the Shannon Blueway, "Waterways Ireland provides world beating facilities and services on the Shannon Navigation and Shannon-Erne Waterway.

“Through our partnership with the National Trails Office, Canoeing Ireland, Cavan County Council, 'This is Cavan', Leitrim Tourism and Leitrim County Council an outstanding multi-activity product has been built in the Shannon-Erne and Shannon Blueways which is now being packaged by clubs and communities for their recreational activities and companies and organisations for domestic and international tourists. Partnership is key to delivering the future of the Shannon Blueway further into Roscommon, Longford and on down the Shannon as well as north onto Lough Erne."

The Shannon Erne Blueway is at the heart of 200km of paddling area, looped and linear walks.