A day to 'remember, reflect and rekindle' 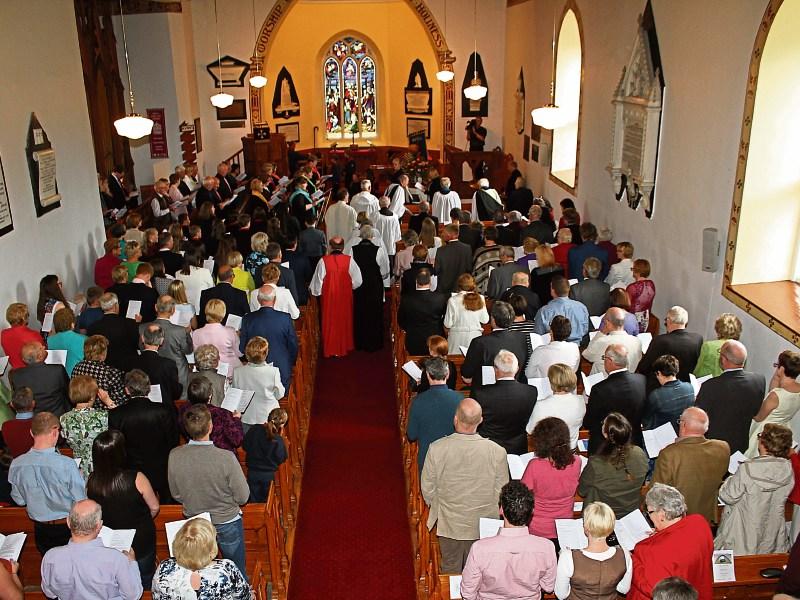 Saturday, May 21 was an important day in the life of St. Mary’s Church, Mohill as a special Service of Celebration and Dedication was held to mark the Bicentenary of this historic place of worship.

It was a day to ‘Remember, Reflect and Rekindle’ all that is positive in the community of St. Mary’s.

The organist was Hazel Tuthill, Principal of the Hunt National School.

The ceremony began with a rendition of ‘Si Beag, Si Mor’, composed by Turlough O'Carolan and performed on tin-whistle and ukulele by pupils of the Hunt School under the direction of Mairead Kelly. Led by flag-bearers from the Mothers’ Union, the Hunt School and Mohill Scouts, the clergy processed into St. Mary’s as the congregation sang the Opening hymn ‘O God, our help in ages past’. The Dedication Collect was read by Canon Noel Scott, an ordinand from Mohill parish who ministered for many years in the Church of the Ascension in Rhodesia.

The development of St. Mary’s, from the monastery of St. Manchan circa 500 A.D., through the ensuing centuries was presented by the Senior pupils of the Hunt N.S. A poem, entitled 'Reflection' written specially for the occasion by Jack Kielty, was narrated by Jessica and Caroline Dobson, granddaughters of the oldest parishioner, Olive Dobson. The Church Warden, Ruth Dobson, read the first lesson from the Book of Chronicles.

Fr. Pat Murphy led the congregation in Psalm 145 while Canon Bill Atkins, the previous Rector of St. Mary’s, read from the Letter of Peter.

'Sweet Beulah Land.' The address, given by the Most Reverend Dr. Michael Jackson referred to ' the celebration of 200 years of faithful and attentive witness which enlarges the way in which a community sees itself and understands the place it holds in the wider community around it.' He spoke of the Christian presence and engagement in Mohill which spans both the ancient and modern.

He referred to Rev. Arthur Hyde who addressed the great cholera epidemic of 1833 by helping to provide a supply of clean water to the people of Mohill. Hyde's grandson, Douglas subsequently became the first President of Ireland. He also spoke of the contribution of Archdeacon Fitzmaurice Hunt who initiated the building of the parochial hall, now known as the Hunt Memorial Hall, in 1893 as a resource for the whole community.

The range of activities carried out in the Hunt Hall today is impressive and ranges from school life to dramatics to Mothers’ Union, Scouts, the Sweet Spirit Gospel Choir and the Leitrim Percy French Society.

The Archdeacon connected the three aspects of the day 'Remember, Reflect and Rekindle' while adding, on this great day of celebration, a further aspect 'Rejoice.'

He concluded by recalling the words of the Psalm 'The Lord is gracious and merciful, slow to anger and abounding in steadfast love. The Lord is good to all and his mercy is over all that he has made.'

Following this, the pupils of the Hunt School sang 'Alainn farraige speirghlas, alainn uisceacha ciuin' written by Douglas Hyde (An Craoibhin) and also the school anthem 'One More Step Along The World I Go.'

The Rededication of the building and thanksgiving for gifts was performed by Bishop Ferran Glenfield, Bishop of Kilmore Elphin and Ardagh. Herein lay a link with the past - the exact Collect and Words of Dedication used on August 21st 1903 (at the Re-opening of St. Mary’s Church after extensive refurbishment) were again used seeking the Lord’s blessing on the welfare of the Church and the community.

The offertory hymn, 'Be Thou My Vision' was followed by the offertory thanksgiving, read by Diocesan Reader, Patricia Woods. One of the highlights of the Service was the beautiful performance of 'Bless This House', sung by Pearl Kielty, soloist with the Sweet Spirit Gospel Choir. The Archbishop gave the final Blessing followed by the Processional Hymn, ‘To God be the Glory, great things He has done’, after which the large congregation adjourned to the Hunt Hall for refreshments.

Here, an extensive exhibition of Parish photographs, memorabilia and historical memoirs were on display. Rev Linda welcomed everybody to the exhibition and thanked all who had contributed to the occasion in so many diverse ways.

The commemorative Bicentenary book of St. Mary's Church, compiled by John Dugdale and Hazel Tuthill, was launched and a signed copy was presented to the Bishop.

This book, recalling the history of St. Mary’s from the time of St. Manchan to the present day, is a snapshot in time of the evolution and development of the parish Church. It is now on sale locally.

Craftsman and parishioner, Roy Humphreys also presented a beautiful handcrafted wooden lamp which was specially commissioned for the occasion. The ceremonies concluded with the cutting of the magnificent Bicentenery Cake, baked and iced by Mrs. Mary Hallinan to mark the special occasion.

The large crowd in the hall included many who had not returned to Mohill for some considerable time - Doris Pittman-Bolton (a daughter of the late Dean Bolton, former Rector of Mohill 1941-1966), Mrs. Lorna Meissner, wife of the late Canon Meissner (Rector 1985-1996) and Canon Bill Atkins (Rector 2003-2013) with his wife Jamela and son Mark. Edward Crofton, a descendent of the Croftons of Mohill Castle, with his wife Emma, also travelled from England to be present at the occasion and donated a portrait of his uncle, Sir Hugh Denis Crofton, who was buried in St. Mary’s graveyard in 1903. Many friends of St. Mary’s from near and far, rekindled old friendships and forged new ones on this memorable May evening.

The day was a wonderful celebration of vision and renewal for St. Mary’s Parish and indeed the town of Mohill. Rev. Linda Frost and the parishioners of St. Mary’s extend their deep gratitude to the wider community of Mohill and surrounding areas for their joyous participation and generous support. Buiochas o chroi do chach.