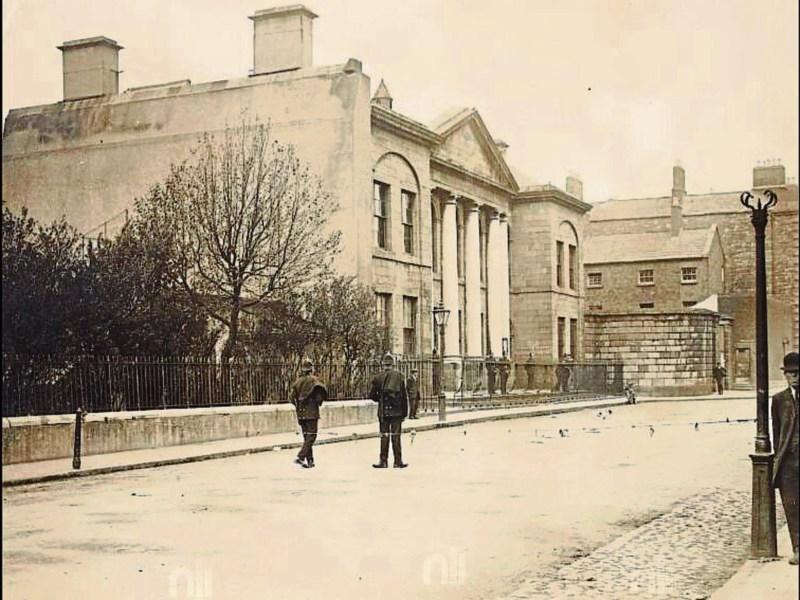 A new book by Colm Wallace, Sentenced to Death: Saved from the Gallows, features the stories of 30 men and women who had the death penalty imposed on them between 1922 and 1985. One of these stories is that of Drumcong farmer James Moran.

Patrick Kilbride owned a farm of sixty acres in Roscarbon, just outside Drumcong. On his death in September 1936 his will stated that it would pass onto his wife’s nephew, James Moran.

Moran would work the farm and provide for his aunt. Only on her death would he become the owner of the small holding. Mrs. Kilbride must have been unhappy with this outcome however, as she had to be restrained by a Garda from assaulting James Moran and his mother on the day of her husband’s funeral.

By 1941 Moran was still working the Kilbride land but was living with his sister, brother and mother two miles distant in the townland of Boneill.

On the 19 th April, 35-year-old James Moran spent the evening in Doyle’s public house. Sometime after 8pm, Mrs. Kilbride came to Doyle’s for a bag of meal. She was last seen walking home shortly afterwards. At 9:30pm Moran left the premises, being described by the proprietor as “staggering and being hard to understand.” He was wearing a green felt hat on his head.

At 10:15pm a neighbour of Mrs. Kilbride, Thomas McKiernan, passed her house and heard loud noises. As he listened closer, he heard what he thought was the sound of an animal trying to release itself from a fence as well as a dog barking fiercely.

At 11:50am the next morning, following a tip-off from a neighbour, Sergeant P. McNamara of Carrick-on- Shannon Garda Station visited the house of Mrs Kilbride to be confronted with a shocking sight.

The elderly woman lay dead in front of the fireplace in a pool of her own blood. Pieces of furniture, a mantelpiece and some statues were smashed and a broken glass bottle was on the floor. Her hair contained fragments of glass and her head was covered in a black cloak, which had been pinned around her neck.

The 75-year-old woman had received seven severe wounds to the scalp with a blunt instrument or broken bottle. She had lived for some time after the grievous injuries were inflicted, but had finally succumbed to head wounds and severe crushing of the chest. A man’s soft green hat lay close to the body.

Moran had awoken on the morning of the 20th April at 9am and attended Mass at 12:30am.

He noticed everyone looking at him and was then told that his aunt was dead. “Nonsense, she is not dead” replied Moran.

Several people informed him of this news before he eventually went to Roscarbon. Moran arrived at the house, in which there were already Gardaí, at 3pm saying only “this is terrible...to see a man’s house broken up this way.”

He was immediately under suspicion and a photograph was taken of his left hand which had skin missing. It would later be shown to match skin found on the floor near the body. On top of this, his trousers were bloodied while his other clothes had been freshly cleaned. His mother admitted she had washed his shirt that morning.

Moran was swiftly arrested and appeared for trial in November 1941. The prosecution case rested on the evidence placing him in the vicinity of the murder and statements he made to numerous witnesses afterwards.

It also dwelt on a £5 life insurance policy he taken out 24 weeks previously on his aunt’s life, as well as the farm that he was to inherit on her death.

Moran pleaded not guilty to the charge of murder. A death sentence for Moran was a very real possibility in the event of the prisoner being found guilty.

Moran had initially claimed to the Gardaí to have said goodbye to his aunt, who was then perfectly healthy, at 10pm. However the Gardaí were aware that he had gone straight to a neighbour’s house at that time and told him of an argument he had just had with his aunt where she had hit him with a hammer.

As they walked home towards Boneill that night he had told another witness, James Sharkey, that a mark on his forehead was as a result of an argument he had with his aunt. He had even told Sharkey he had given her “a few cracks” with a hammer.

When asked how she was, he answered “not too bad.” The green hat that he had been wearing that night lay beside the body and his clothes were bloodied.

He also had in his possession on the night a clock from the Kilbride house with no pendulum which he gave to a witness named Mulligan. The pendulum was later found beside the corpse of his aunt.

Moran, perhaps realising the weight of evidence against him, changed his plea to not guilty for reasons of self-defence.

The jury selection in the case stood down a potential juror due to their conscientious objection to the death penalty. There was also a refusal to the request to downgrade the charge of murder to manslaughter, illustrating the severity of the crime in the eyes of the state.

The prosecution described the almost “unbelievable savagery” and the “brutal murderous assault” which led to the death of this “woman of pensionable age.”

The court waited anxiously for Moran to take to the stand in his own defence and, as the only living witness, tell of the violent events that happened in the farmhouse in Roscarbon sometime between 10 and 10:20pm on the 19 th April.

“I thought I had stunned my aunt, but I did not know she was dying” began Moran. He described how he returned to the house with ten or eleven drinks taken.

“You have lots of drink on you; you are spending lots of money,” accused his aunt. “If I am,” answered Moran “I am spending none of yours.”

According to Moran’s testimony, the house was pitch- dark, lit only by a Sacred Heart lamp. His aunt suddenly struck him with a hammer on his forehead. He took the hammer from her and put it in a cupboard before bending down to light a cigarette. Mrs. Kilbride hit him on the head again and “knocked sparks” out of his eyes. It was too dark to see what article she had hit him with.

He broke a chair on her and pushed her backwards. She came at him three times more and he hit her with the tongs he was holding each time.

He saw her shadow go down and struck her again with a chair before tripping over a milk churn and throwing it to one side.

He then left the house, picking up the clock and his coat, but leaving his hat. He told the witnesses afterwards about the fight and said that she was “not too bad” because he believed it at the time, asserted Moran.

He only knew of her death at Mass the next morning. Moran denied hitting her with the broken sauce bottle. He told the court that he did not know how she had sustained broken ribs consistent with being lain upon.

The defence called two witnesses, both of whom testified to Mrs. Kilbride’s violent character. She had allegedly become contrary since the death of her husband. She had struck Moran with a rake more than once, attacked his mother with tongs and hospitalised her husband for six weeks after attacking him with a pitchfork.

Mr Justice Hanna, in summing up, gave the jury the option of a murder verdict, if they believed it to have been a premeditated attack on his aunt. If the jury believed that his intention had not been to kill, they could return a manslaughter verdict.

Two and a half hours later a manslaughter verdict was announced. A relieved Moran was told by the judge that the jury had been very merciful.

Instead of the death sentence he could have been handed down, James Moran was sentenced to ten years penal servitude.