Hard work pays off for 19-year-old 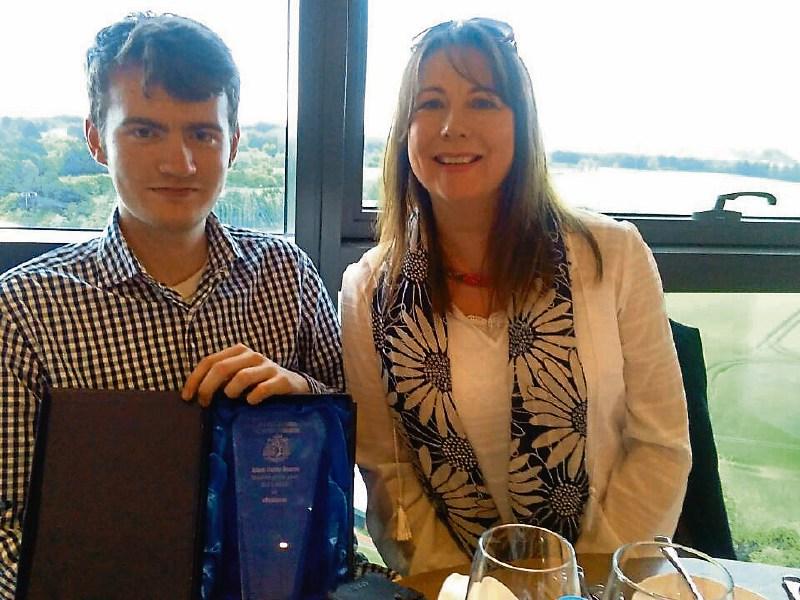 It is the phone call no parent ever wants to hear, but early one November morning in 2014, Nicola Kearns, from Fenagh received the devastating news that her son Adam had been seriously injured in a road traffic accident.

Adam who was living in Fatima, Dundalk, Co Louth with his grandfather at the time, was commuting from Dundalk to Pearse College in Dublin when he was seriously injured.

Suffering multiple broken bones, lacerations and serious head injuries, Adam was rushed to Our Lady of Lourdes Hospital in Drogheda before being moved to Beaumont hospital where he remained in a coma for eight days.

Now, after 18 long months of rehabilitation not only has 19-year-old Adam fought to regain his life, he has gone on to secure the O Fiaich College Student of the Year Award for eBusiness, much to the delight of his family.

Speaking to the Leitrim Observer this week, Adam's self professed 'proud mammy' Nicola, said that it was incredible to see the amazing achievement just 18 months after she thought she had lost her son.

"(The day of Adam's accident) I was at home on my day off and the phone kept ringing and ringing and I thought 'who would be ringing me so early?'," recalled Nicola.

When she answered she was told her son Adam had been seriously injured in an accident.

Nicola raced to hospital to be with her son. In the hospital Adam was wheeled by her on a gurney.

"I knew he had been seriously injured but in the hospital he was wheeled by me in the corridor on a gurney, he was just covered in blood and I fainted. It was such a shock," she said.

After eight days Adam began to emerge from the coma.

"When they were weaning him off the morphine and all the machines they told us that they couldn't know the extent of the damage caused by the accident," said Nicola.

First Adam moved his hands and arms, then he opened his eyes and recognised his mum.

"It was like seeing my son being born for a second time," explains Nicola.

Over the course of the next few days it became apparent just how many other injuries Adam had suffered in the accident. Apart from a fractured skull he had four broken ribs, a collapsed lung, a broken collar bone and serious leg lacerations.

He remained in Beaumont for 15 days after the accident and was in a cast until January 2015.

Following this he underwent intensive physiotherapy at the National Rehabilitation Unit in Dun Laoghaire to deal with the impact of the life changing accident.

Not only were the physical injuries severe, they also marked a devastating blow for his dream to study sports in college.

"It was difficult for me when I realised I wouldn't be able to do that any more," admitted Adam earlier this week.

Undaunted, Adam decided to turn to a career in business. In September 2015 he enrolled in an ebusinesss PLC course in O'Fiaich College.

Not only did Adam complete the course, he also achieved top marks, securing the award as Student of the Year for his efforts.

"I was so very proud of him for winning the award. He worked so hard for it and it paid off," said his mother Nicola.

Adam now hopes to go on to NUI Maynooth to study business.

Nicola is grateful to everyone who helped her son and her family following Adam's accident.

She paid a special tribute to the doctors and nurses of Our Lady of Lourdes and Beaumont Hospitals and to the wonderful staff of The National Rehabilitation Unit in Dun Laoighaire.

"I would also like to thank my work colleagues in the Fenagh Visitors Centre. They were so good to me and supported me through it all," said Nicola who moved to the Fenagh area just over two years ago.

"I would open my door and find they'd left me milk or other essentials and one even took my dog to look after for a few months while I was with Adam in the hospital.

"The love and support that they and the people of Fenagh showed me and Adam in the months after the accident has made me feel so welcome in the community.”