Primary school pupils publish their own Book of Fenagh 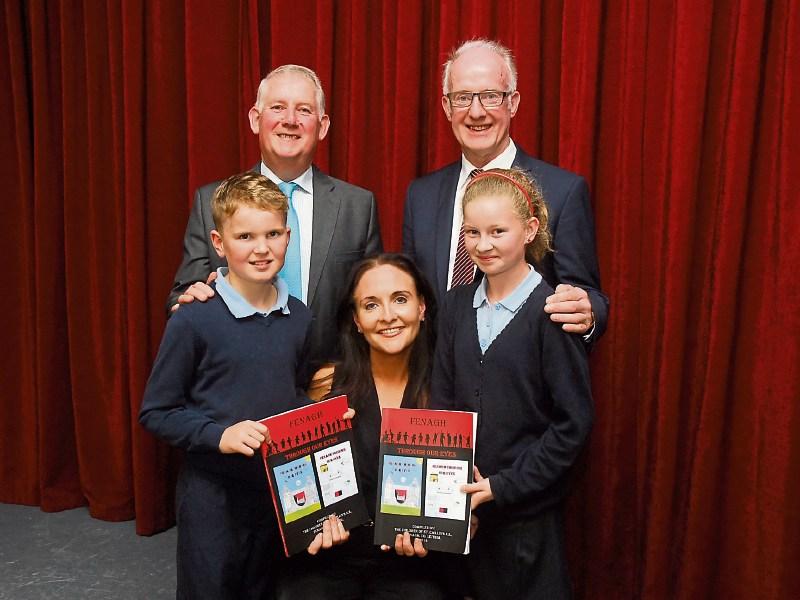 The children of St Caillin’s NS, Fenagh have published their own book ‘Fenagh Through Our Eyes’ to celebrate the 500th anniversary of the Book of Fenagh.

The book which includes photos, stories, poems and paintings from the local kids was put together in under two months with much hard work and dedication from teachers, pupils and locals - the result will certainly go down in local history. Along with the book is a DVD which includes interviews by the students with older people in their families and around the parish.

Principal Joe Reynolds congratulated the 108 pupils (aged 4-13yrs) and six teachers from St Caillin’s NS took part in the project which celebrates and documents 500 years of community life in Fenagh.

He said the production of the book has allowed the children to see “the significance of the history of Fenagh,” to give them pride in their locality and allow them to see how lucky they are in live in this community. He said the book can be used as a reference in the future for children.

Co-ordinator of the project, teacher Orla Redican paid tribute to Pat Rynn who produced the DVD. Padraig Leyden, Principal of Ballinamore Community School launched the book and DVD last Wednesday, June 22. He said the Book of Fenagh committee wanted to include the children in their celebrations this year and this was a “tremendous” way to do it. He said the book will “last a lifetime” and the pupils will appreciate it more in 10, 20 and 30 years time.

Saoirse O'Neill said the school was “busy” since after the Easter break compiling the book. She noted that some articles took “second, third and even fourth drafts” to get perfect. She said the pupils were “exhausted but proud” of their work.

Fiachra McGovern gave the crowd a taste of what the book contained with an hilarious poem about their bus driver Marian Maloney. Fenagh will celebrate the 500th anniversary of the Book of Fenagh on the August Bank Holiday, with historic lectures, local events and entertainment.

Fenagh Through Our Eyes is available to purchase in St Caillin’s NS, Fenagh Visitor Centre and other local outlets.