Gortletteragh native helps rescue over 2,300 refugees on the Mediterranean 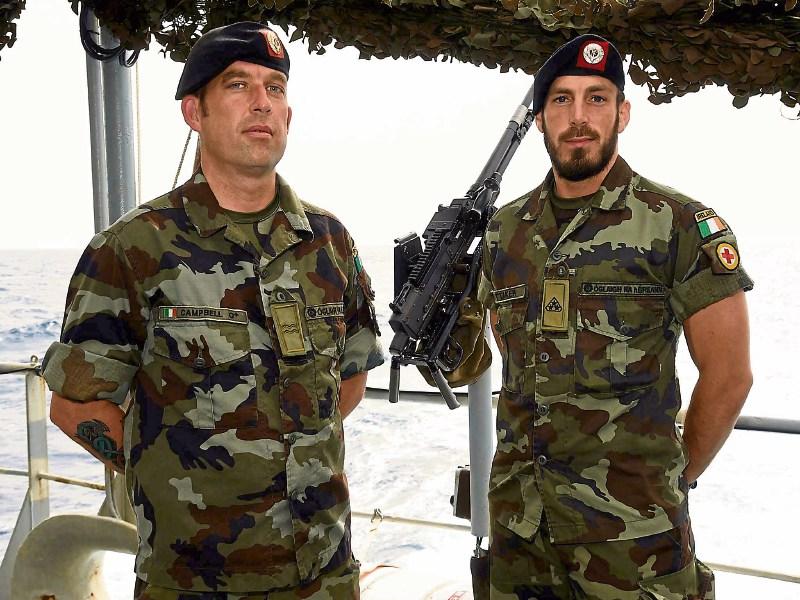 A Life Less Ordinary is the perfect description of a soldier’s day to day life, and certainly so for Corporal John Campbell a native of Gortletteragh who helped rescue 2,332 refugees on the Mediterranean this Summer.

Cpl John Campbell a native of Gortletteragh who now lives in Mullingar was selected to be the army medic along with Pte Graham Whittaker of the Central Medical Unit onboard the Naval Ship LÉ Róisín which departed Haulbowline on May 1 this year on a three month humanitarian search and rescue mission.

Before this mission, Cpl Campbell and Pte Whittaker had served ten trips overseas to various parts of Africa and Europe but this was their first interaction with the Naval Service.

John told the paper, “The first impression we got of the Naval service was how professional and hard working all their personnel were and their help and guidance towards us was much appreciated.

“Whether you are Navy, Army or Air Corp we’re all part of the Irish Defence Forces and all part of the same team. But being a Midlands man and a culchie from Leitrim being surrounded by 40 odd Corkconians and a few Dubliners presents a challenge in itself!”

En route to the Mediterranean the soldiers trained intensively in many aspects of Naval Operations from man overboard drills, fire fighting damage control and weapons. John also became a Ships Helmsman, qualifying him to steer a ship under an Officers Direction.

John commented, “I actually found it a lot easier than I thought to adjust to life onboard a ship. I had images of being green with sea sickness but thankfully that day never came.”

Their training was first put to use on May 16 when they rescued a total of 350 refugees. “On the 16th of May we encountered our first search and rescue mission. At 0930hrs in the morning we discovered a rubber craft with 125 people onboard. Finally the time had come to put all our training and professional expertise into practice and the operation ran very smoothly. Later that day we received 225 rescued personnel from the Italian Navy ship Borsini. Once we had all personnel onboard safely we headed for the port of Messina in Sicily,” recalled John.

He explains, “Being a medic onboard during these operations you see things that put all your training and expertise into practice from basic sea sickness and fevers to saving lives through CPR and Resuscitation and dealing with all ages from babies to elderly people.

“There is no doubt in our mind that we will never again get to experience the trials and tribulations of what we went through during these rescue missions. Some of the casualties we had to treat really tested our medical knowledge and skills.”

L.É. Róisín rescued personnel from all sides of Africa, the Ivory Coast, Nigeria, Guinea, and Somalia as well as Bangladesh and Syria.

They encountered all types of sickness, from simple injuries and broken bones to infestations, scabies, lice and even death. “Our ethos was to treat every person the way we would like to be treated ourselves. I must admit sometimes when you hear the background stories from the people you’re treating you can’t help but be sympathetic but we strived to make them feel at ease, treat their aliment and move on to the next patient. On the flip side sometimes tragedy was all too common and even though we did all that we could it was to no avail on three occasions,” he told the paper.

John proudly states, “Over the duration of the operation we were directly involved in the rescue of 2332 people. We gave these people support at a critical juncture in their lives and although we were only part of their lives for a short period we helped them to the best of our ability and hopefully they will go on to a better life in the future.”

Cpl John Cambpell will end his mission with LE Róisín and return home on July 15, he would like to thank and wish Lt. Commander Finegan and all his crew safe passage on all their future missions onboard L.É. Róisin.