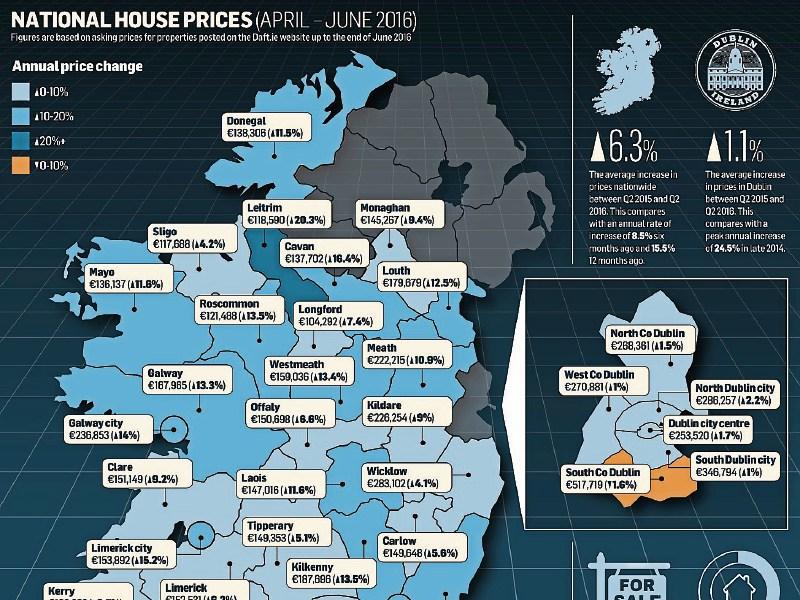 Asking prices for properties in Co Leitrim have risen by just over 20 percent in comparison to this time last year according to figures released by online property website daft.ie

The figures, released earlier this week show that the county has seen the highest increase in the country for asking prices compared to this time last year.

According to a breakdown of the figures the average asking price for a 1 bed property in Co Leitrim in the second quarter of 2016 was €41,000, up 10.6 percent on the same period last year.

The daft.ie report also revealed that more than half of all properties put up for sale in Connacht /Ulster, sold in four months or less.

Speaking to the Leitrim Observer, local auctioneer, Gordon Hughes, said that the figures emerging for Co Leitrim came as “no surprise”.

“Even people who have sites for a house are finding that it is, on average, 30 percent cheaper to actually buy built,” explained the Ballinamore based auctioneer.

Despite the uncertainty caused by Brexit, Mr Hughes said that enquiries were still ongoing from potential buyers from the UK.

“I think in the lead up to Brexit there was uncertainty but now people know that Britain is leaving the EU and they are starting to buy again,” he said.

This is particularly true in Co Leitrim where the largest demand for one off rural housing is actually coming from buyers originating in the UK.

“We are seeing this, even with young people who grew up in rural areas, they are looking for houses in towns where there are more services such as shops, pubs and bigger schools,” he said.

Adding to difficulties for potential buyers in Co Leitrim is the lack of planning permission as a result of the Waste Water Directive.

“This means that even if people want to build they won't get planning permission,” said Mr Hughes, “essentially we have a finite amount of housing stock and no way to produce more stock. This means that demand will only increase and prices will continue to rise.”