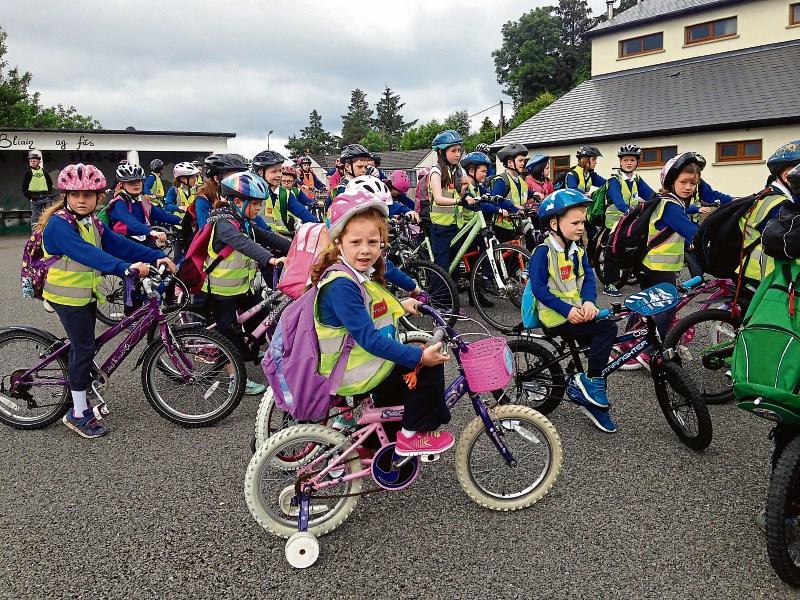 As in 2015, Fatima NS, Cloone were fortunate to be awarded grant aid from Leitrim Sports Partnership to run a Bike Day in the village.

On Friday, June 17 all 64 pupils and their teachers - and some friends - took part in a Bike Day.

The organisers of the event got great help and support from Carrick-on-Shannon Gardai and Cloone GAA who allowed the participants full access to their facilities at Pairc Naomh Mhuire.

The parents of the pupils also turned out in force to support the cyclists and stewards the route.

The day started with an assembly at the school with preparation for 1km cycle from the school to the local GAA grounds with a safety talk and safety check before the cycle started under garda escort to the GAA grounds.

Here the cyclists utilised a .77km walking track around the pitch.

School Principal, Teresa Moran said: “We had calculated if we did 55 laps of the pitch we would have completed the 42.185km needed to complete a marathon. The children and the teachers in fact lapped the pitch in excess of 160 times in total almost three marathon distance!

“All morning the children engaged in activities on the grounds including (A) Slow bicycle Race (B) Obstacle race (C) Cycle the plank (D) timed sprint (E) Duathlon (Senior Classes).

“We were also joined by Seamus Gibbons from the Electric Bike Company in Leitrim Village who brought along his Electric Tandem, an adult electric bike with kiddie cart and an electric bike for senior pupils. Every child got to experience the fun of travelling by electric bike!”

Shortly after 1pm as the clouds gathered students, staff and friends picnicked in the stand at the pitch before heading back into Cloone village.

The children from infants and 1st class (25 pupils) with their leaders cycled the main road back to the village while the remaining 39 pupils from 2nd class to 6th detoured to take in the 3.75km Bothar na Naomh Trail. This trail took the cyclists on paths and tracks with a loose gravel surface through deciduous woodland and regenerated cutaway bog to Annaghmaconway Lough and back to the school.

On arrival at the school the teachers and other staff had arranged a fresh fruit treat and drinks for everyone and as a special reward an ice-cream bar where each child got to replace lost energy by decorating their own cones with as many toppings as they wished!

On the last day of term all participants were presented with a medal to mark their achievement in taking part in Bike Day and Special Endeavour Award plaques were presented to one cyclist in each class.