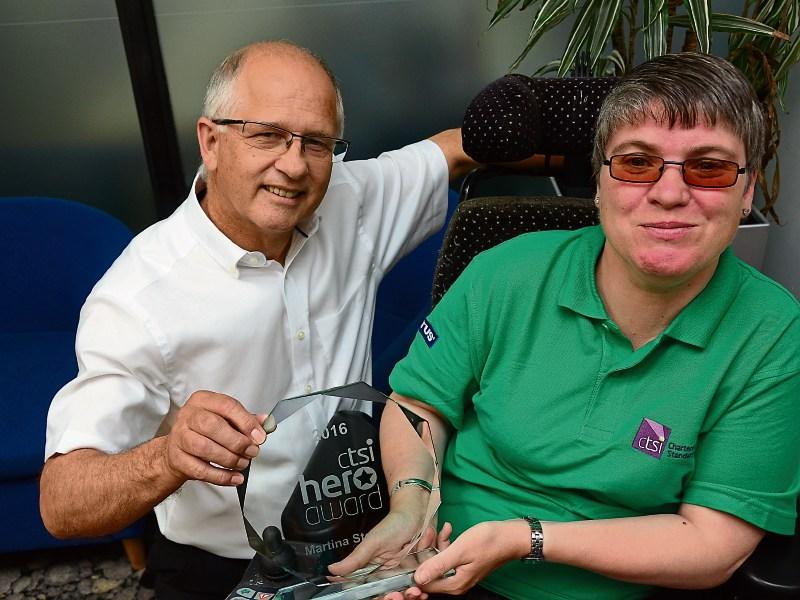 Manorhamilton native Martina (Tina) Stewart recently won a British National Hero award for her work in highlighting overcharging abuse of disadvantaged customers by utility companies, retailers and mobility goods providers for whom in Buckinghamshire she is a voluntary advocate. Her work resulted in the return in thousands of pounds to these wrongly charged customers.

Tina’s national hero award as Buckinghamshire Community Champion was presented to her in the Holiday Inn’s Conference Centre, Telford by Leon Livermore, who is CEO Trading Standards Institute, on Thursday night, June 23.

Former resident of McDermott Terrace Manorhamilton, Ms. Stewart has lived and worked in England for many years. But she keeps in regular contact with home and she is looking forward to again visiting the Manorhamilton and the North Leitrim area in August.

Tina said she was “shocked” to receive her hero award and also added it is “so nice to be appreciated for my hard work and what I go through personally on day to day basis.”

Already suffering from cerebral palsy since she was born, Tina was the victim of an unfortunate accident in March that now confines her to a wheelchair.

Writing in “Wycombe Today” on Tina Stewart and her notable achievements, reporter Clare Jones says “despite her life-long battle with cerebral palsy, 47-year-old Tina has quietly championed the cause of disadvantaged and vulnerable residents for nearly two decades.

“And for the past three years, she has been a shining example for Buckinghamshire County Council’s Community Champions, who help disadvantaged consumers.

“She was nominated by Buckinghamshire and Surrey Trading Standards after winning back several thousand pounds for others from utility companies, retailers and mobility goods providers.

“Not only this, Tina has worked tirelessly to raise awareness of scams in a doorstep-crime black-spot, and identified an elderly dementia sufferer who was being targeted with mail and phone scams.

“Tina, who lives in Aylesbury, said: “Winning this award is a huge shock to me. Everything I’ve achieved in life has been a struggle and I’ve had to work hard. When you’re a wheelchair user you see things from both sides. You can’t be afraid to ask for help.”

“It was Tina’s determination and selfless drive to help others (who are) at a disadvantage that convinced Senior Trading Standards Officer Chris Holden she was a worthy Hero Award nominee.

“She was the first to enrol on the service’s Community Champions scheme launched by Chris in April 2013.

“Tina has brought a totally new dimension to our service’s offering – that of a vocal disabled consumer,” said Chris. “She epitomises our aim to create champions who are the eyes and ears on the ground, helping us to protect and empower vulnerable consumers. I’m overjoyed to see her tremendous efforts recognised.”

“She exemplifies all that we value in our Community Champions, who give terrific service by helping our vulnerable residents fend off scammers. Tina is one of those champions who reinforce our message that Buckinghamshire is a no-go county for consumer criminals and doorstep rogues.”