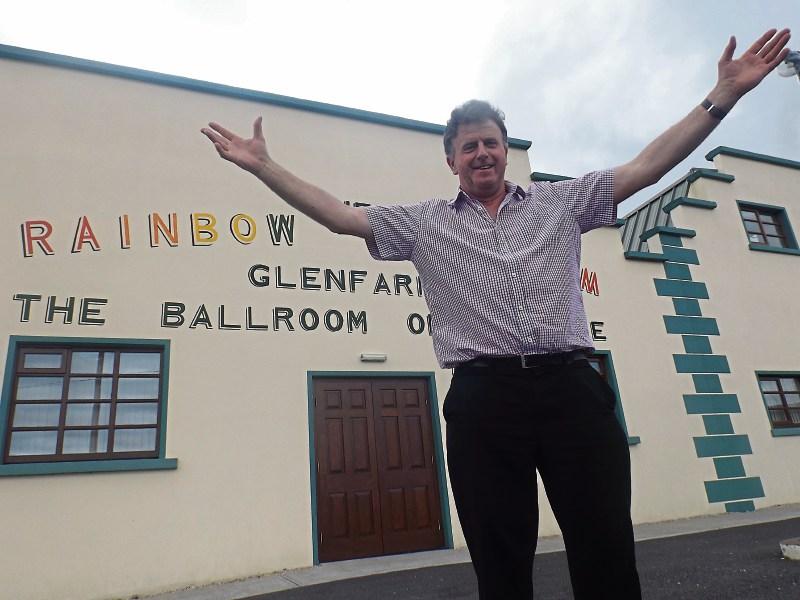 As a boy Hubert McMorrow used to catch the SLNCR railway. Getting on at the big bog train station outside Glenfarne he’d jump off at Manorhamilton junction to be met with a buzz of enterprise that would stay with him forever.

All around him was a hive of commerce that was the everyday life of the railways. The dash of 2-3 postmen with their carts arriving full of mail and parcels, bags of school clothes were also coming in from the posh private schools in England across the border for poorer backs and trying hard not to be found under the Customs' gaze.

Looking round the bustle of excitement he was well and truly smitten by the romance of the railway bug. He would manage to go to Central Station in New York years later but it couldn’t compete to the 6-year boy looking round him in Manorhamilton station.

As you stand on the old track at Glenfarne station you capture that glimpse too of what must have been a great line. You are on the Glenfarne Kiltyclogher Heritage Tour, and Hubert is your guide.

Looking around, the old signal box is ahead and the space for the tracks still apparent through lush green growth now sweeping off into the distance. If you listen carefully you might just hear the whistle or a murmur of voices.

For someone who grew up picking blackberries on redundant tracks, this railway has an extra poignancy. There’s always a romance and intense sadness about a railway, lives full of hope setting off for new terrains, but many more forced to go though no choice of their own.

This route would have gone to Enniskillen, and then people would go onwards to the port of Belfast. The old Customs hut still stands, lovingly restored, as too the waiting room. There was also a separate waiting area, Hubert informs you, for the landlord’s family, not needing to mingle with the locals, a reminder of apartheid in a different time.

But there is a constant affirmation throughout the tour of stories of fearless resilience. Here in Glenfarne, Leitrim’s famous son Sean Mac Diarmada would have used this route to Belfast. It was on this platform Hubert recounts that Mac Diarmada returned when he got out of prison in 1915, arrested for making a speech against enlisting in the 1st World War.

He was met by a crowd and, never daunted, took the opportunity to address the people once more.

Further on the tour you get an opportunity to visit the Kiltyclogher Heritage Centre and his cottage, the only birthplace still standing of a proclamation signatory. A special place along with its surroundings, it breathes life once again into what made the incredible man in this centenary year.

The construction of the railway was however to prove his downfall. The monies he invested in it were too much and ended up bankrupting him. Harsh evictions of the Tottenham estate on its tenants would also be etched in the public mind and the folklore later heard by one of them, the young Sean Mac Diarmada, may have helped ignite the rebel heart.

The estate fell then into the hands of Sir Edward Harland of Harland and Wolff shipbuilding fame and one time Lord Mayor of Belfast. He would use the grounds officially for hunting and fishing. The story goes that the lake itself was often unofficially used by many more for smuggling with escapades to and from the Fermanagh headland, visible when you sweep around the green lined roads of the Glenfarne woods.

Harland himself was a proud fellow but would meet his match. He was to encounter a local strong man called James Clancy on the Leitrim road who would not give way to him, as his status would have dictated.

“Do you know who I am?” he is claimed to have said, “I am the Lord Mayor of Belfast.”

Unperturbed James Clancy stood his ground and was to have replied, “I am the horse of the Black Island,” the title he was known by.

Therein it was believed a respect was given by Harland to Clancy for it.

Harland was to eventually die on the estate in 1895. Paths of history once again crossing as the strength of a strong man was called upon and Mr Clancy was needed to carry his coffin down the stairs in the ‘big house” of the estate. Life’s intertwined.

And once again the railway was used to transport Harland’s remains from Glenfarne to Belfast to be met by thousands of the shipyard workers.

As you drive back you approach the iconic shape of the last stop that is the original Rainbow, Ballroom of Romance, the brainchild of John McGivern. It has been given a new lease of life recently, further developed into a museum with memorabilia of the showband era under the vision of local councillor Sean McDermott and others.

From the Rainbow Ballroom the sense of Leitrim resilience still pervades, as a dream became reality and the words of Hubert ring true in your ears. The demise of the tradition of oral history is lamented in keeping tradition alive. Hubert has a love of the people that came before, and he is fascinated by their resilience against the odds.

He says, “It's important to know where we came from. The more we learn from the past the more it helps make us all become better people today.”