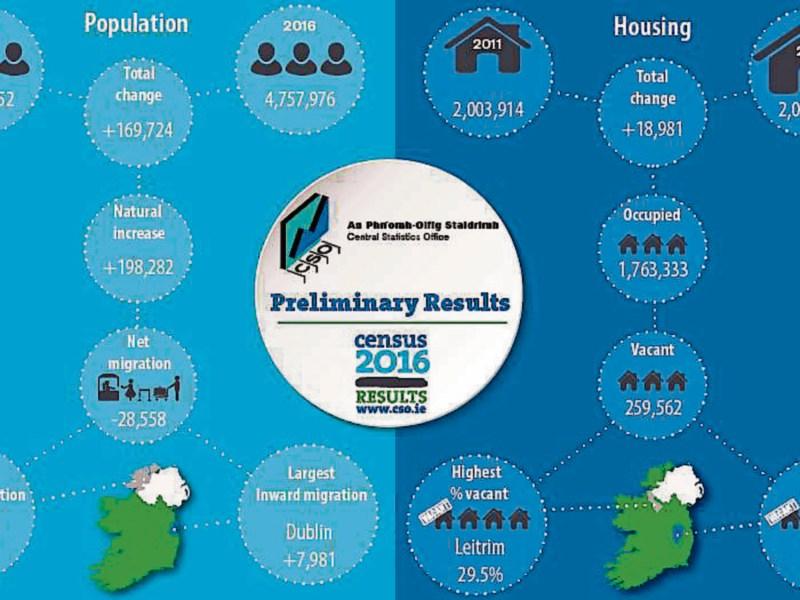 The increase is just 0.5% overall and a closer look at the figures show that, north Leitrim in particular, is experiencing an almost universal decline in population.

Very few areas of the county showed major increases with Mohill Electoral Division (ED) recording the worst result for the larger urban centres with a drop of 121 people in the last five years.

However the village of Dromod continued its steady growth seeing an increase in its ED of 95, bringing the population of the area to 871.

Increases were also seen in Drumshanbo ED with an increase of 93. However larger urban areas where increases were expected, failed to materialise with Carrick-on-Shannon ED only recording a 2.5% increase (99 people ).

Nationally the preliminary total of the population enumerated on Census Night, Sunday, April 24, 2016, was 4,757,976 persons.

While most counties experienced some level of population growth three counties witnessed population decline over the five years, namely Donegal (-1.5%), Mayo (-0.2%) and Sligo (-0.1%).

The total change in the population between censuses is the combined effect of natural increase and net migration - a measure of the movements of persons into and out of the State.

Net migration on a county basis varied widely across the state with most counties experiencing net outward migration while a small number (such as Dublin and Cork) witnessed net inward movements.

Nationally there has been a substantial decrease in the number of vacant dwellings since 2011 – 13% or nearly 30,000.

In Leitrim the figures show a total of 5,375 vacant dwellings - a vacancy rate of 29.5% according to the figures published last week.

Scanning and processing of the two million census forms has begun and the first definitive results are due to be published next March,

Brendan Murphy, Statistician at the Central Statistics Office (CSO), explained that “The preliminary count is based on a clerical summary of each enumeration area compiled by the 4,663 enumerators.”