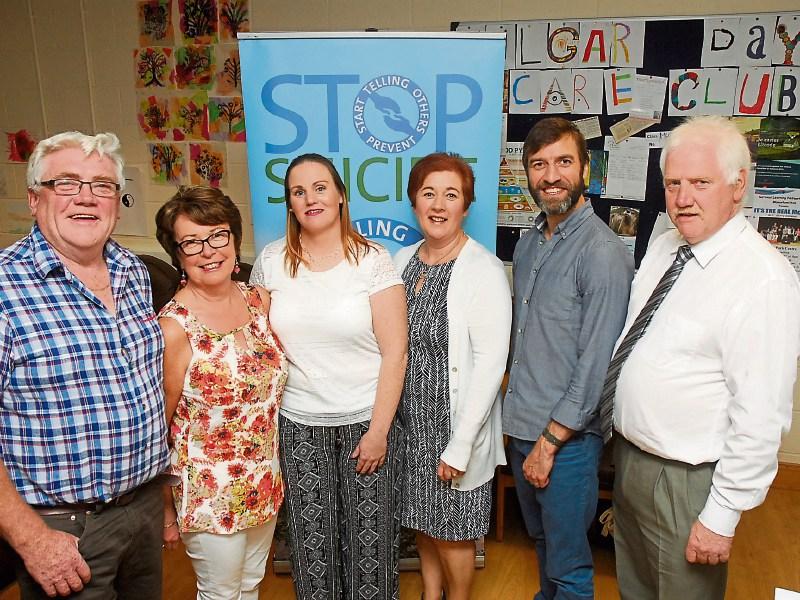 Mr. Reilly said that “STOP had 26 counsellors working for it in the area and it provides services in Donegal, Sligo, Mayo, Roscommon, Longford, Cavan, West Fermanagh and Leitrim.”

He noted that virtually all its funding comes from voluntary donations with very little coming from the HSE and the government.

Tom called on the HSE and the government “to take a look at the provision of funding for STOP” and remarked he “was sad to see Console wound up” which has occurred recently due it seems misappropriation of funds.

The Chairman also stated that it takes €100,000 annually to run STOP. He thanked Sean and Carmel Fallon for the outstanding work they had done for STOP since its formation in 2004 and for keeping the organisation “on the road.”

Tom Reilly also appealed to individuals and organisation to “please consider raising money for STOP,” so that it can continue its life saving work.

Mr. Lahiff said “we provide a free counselling service for individuals who contact us when concerned about their own wellbeing, are feeling ‘Down,’ at risk of taking their own lives or harming themselves.

“A large proportion of those who have sought assistance from us come from the farming community within the area listed. From our experience, for everyone person that dies by suicide, approximately 15 people within the community, family and friends are affected and some fear for their own safety.”

We seek to have any caller in contact with a counsellor within 24 hours; otherwise we offer advice or support for anyone unsure of how to respond if concerned for another.”

Wexford man and one of the organisers of the annual Cycle Against Suicide, Joe Dixon who also spoke at STOP’s Re-launch stated “STOP is such a value to the community” because of what it does.

Joe also said at one stage in his life he had “become obsessed with taking his own life and went down to the seaside to do it” but when he was there he “heard (in his head) the voice of my mother and young daughter and this changed my mind.”

He went home to his wife and told her what had happened. His wife said to him “you need to get help.” Joe got this help as soon as possible after the incident and in due course was assisted to deal with his issues.

Unfortunately sometime later his highly gifted 16 year old son Fergus committed suicide, which was devastating for his sister, as well as for Joe and his wife.

With regard to preventing suicide Joe advises everyone who may encounter the possibility of it happening “to get help for the person to help themselves.” Joe also noted “since 2010 in Ireland “3,000 families have been devastated with suicide.”

Tullaghan native and the GAA’s Health Manager, Colin Regan made an excellent presentation on the issue of suicide in all local communities when he addressed Thursday night’s STOP Re-launch event.

He said it was “part of my (GAA Health Manager) job to support families and GAA Club and communities when a suicide occurs.” Colin also stated that he had been dealing with two recent separate cases of suicide that tragically involved a GAA club team manager and a young teenage player.

He praised STOP for the work it was doing regarding suicide in the community. Mr. Regan said the GAA has established Health and Well Being Committees in every county while the GAA also works in close liaison with the Samaritans in relation to suicide prevention, etc.

At the conclusion of the STOP Re-launch event a young lady from Toothfield Manorhamilton Teresa Keaney sweetly sang a number of songs that was greatly appreciated by the whole attendance on the night.